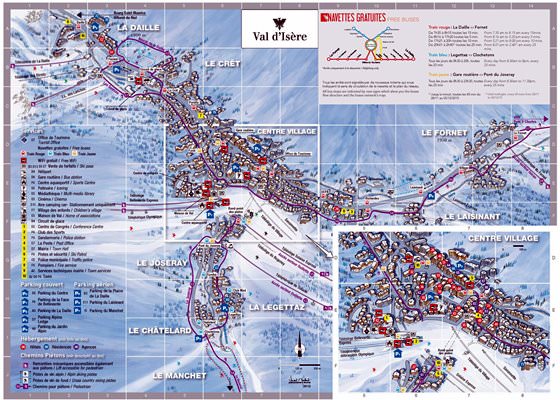 Search for services, infrastructure and sights on map of Val d Isere

Couples who dream of spending a joint holiday in a quiet secluded atmosphere can be accommodated in charming Chalet La Marsa. This lovely holiday house is located in Le Fournet, just a few minutes walk from the ski lifts. The luxurious chalet houses a wellness center with a hot tub and sauna, as well as a wonderful outdoor terrace where it is always nice to admire the surrounding scenery. Besides that, the hotel … Open

Those who want to see beautiful wildflowers - another pride of the Alps - should in no way ignore Sentier Botanique. And along the way, you can see a mountain waterfall and "get stuck" in this place for a long time, whereas most of you would like to stay here forever. The most popular sport in the ski paradise (besides the winter types of entertainment) is tennis, so its fans should definitely go to such centers as … Open

10. Visitors with children are provided the best discounts in local shops and trading centers, so buying family tickets is always very profitable. Large groups of tourists are also available for discounts. 9. Local grocery stores and supermarkets feature a wide selection of products. Stores, which are located in the heart of the resort, are characterized by higher prices. The same items can be … Open

A very colorful and home-like cozy interior attracts travelers to La Savoyarde. Its rooms are designed in different styles where the presence of interesting paintings, designer table lamps and beautiful fabrics make the situation unique. A hall with retro black-and-white photographs on the walls contrasting with bright designer furniture looks quite original. Among the hotel's other advantages worth noting is an … Open

Among other upscale hotels in the resort, special attention should be paid to Hotel L Aigle des Neiges ready to offer connoisseurs of comfort a broad selection of luxury suites. They also include exclusive "Prestige" suites where the cost per night is about 1,000 USD. These two-level suites feature stylish designer furniture as well as a spacious nicely decorated bathroom. Also, the hotel's infrastructure includes … Open