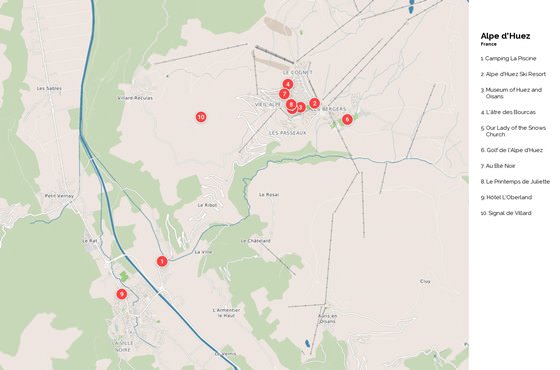 Search for services, infrastructure and sights on map of Alpe d Huez

The history of this “sunny island” started more than 80 years ago. This is the name that guests and locals gave to the town because it has so many sunny days a year. Alpe d'Huez became an internationally famous resort after competitions in such an interesting winter sport as bobsleigh. This event took place in 1968. This is the time when Grenoble hosted Winter Olympic Games. Starting from that time, Alpe d'Huez … Open

Although Alpe d'Huez is famous primarily as a winter ski resort, the area is not deprived of interesting destinations suitable for sightseeing. The first town in this area was established yet during the Middle Ages. This happened after silver deposits had been discovered in the area. The town reached a peak in its development in the 11th century. Today, tourists can explore the well-preserved historic center. Some … Open

Alpe d'Huez is suitable for active recreation all year round. In winter, fans of skiing visit this resort to enjoy mountain skiing and snowboarding. The resort has a range of ski runs for beginners and professionals. If you have never tried this winter sport before, you will find several wonderful sports schools that offer skiing and snowboarding lessons for everyone. The resort is perfectly suitable for vacationers … Open

Go Sport Montage Concept also has a great stock of sports gear, clothes and accessories for all family members. If you need an attractive and quality parka or hat, this shop is one of the first places to visit. Go Sport Montage Concept sells winter accessories and even natural fur apparel. Not only sportsmen but also everyone who likes staying outdoors in winter will find this shop very useful. Centre … Open

Maps of Grenoble
The 'Rocktambule à Grenoble' festival in mid-October gathers all rock fans in one place - namely, at 51 Boulevard Gambetta. Some people spend the whole year waiting for this unique event to see those who will entertain visitors this year and enjoy the atmosphere of the festival - fascinating, friendly, and fun. Spectators are entertained by both starts of the world stage and ... Open »
Maps of Rhone-Alpes
A good tradition was caught on and, since 1852, a symbolic event was held every year supported by local authorities. In early December, an incredibly beautiful illumination is installed in the city; scenic old buildings and landmarks are adorned with original lights. Lyon Festival of Lights announces the beginning of Christmas holidays, during which there are curious events in ... Open »
Maps of Val d Isere
Those who can not live without a bike will appreciate such a festival as L'Iserane held at the end of June. During this time you can test your skills on the highest mountain pass in Europe, namely at an altitude of 2770 (this is the elevation of Col de l'Iseran) - the test is really for the strongest. It is also worth noting that this place is truly historic, so local ... Open »
Maps of Chamonix
Large outdoor stages with numerous viewing points are mounted on the eve of festival. Guests would have a unique opportunity to enjoy their favorite music while admiring the beautiful mountain scenery. The festival features incredible atmosphere of cordiality. The idea of ​​organizing a music festival belongs to André Manoukian. In 2010, the event lasted only a couple ... Open »
OrangeSmile.com - online travel reservation expert providing reliable car rental and hotel booking services. We feature more than 25.000 destinations with 12.000 rental offices and 200.000 hotels worldwide.
Secure Server