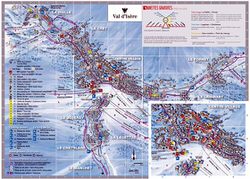 1. You can zoom in/out using your mouse wheel, as well as move the map of Val d Isere with your mouse.
2. This interactive map presents two modes: 'Biking Routes' and 'Hiking Routes'. Use the '+' button on the map to switch between them.

This Val d Isere map has two modes: 'Railway Network' and 'Landscape & Rural Map'. Use the '+' button on the map to navigate.

Our guide to Val d Isere

Where else but in France and the French Alps could you visit authentic French restaurants? In Val-d'Isère, the traditional cuisine is represented by L'Atelier d'Edmond, La Peau de Vache, and Le Trifollet - the three restaurants believed to be the best of their kind. Here you can also have a very tasty lunch in Flash Pizza and Pizz'n'Love Val d'Isère offering pizza and Italian cuisine, as you might guess from … Open

Le Kern Hotel is ideal for budget tourists looking for a secluded romantic stay. A beautiful finish of natural stone and wood presented in all rooms helps to create the atmosphere of romance. All the double rooms are uniquely designed, decorated with restored antique furniture, fabrics of rich shades, and national-style works of art. Lovely carved lamps on the walls, comfortable soft chairs, luxurious carpets on … Open

2. Make sure you check the compatibility of appliances that you plan to take with you before the trip. Line supply voltage is 220 V. If necessary, hotel guests will be provided with adapters. 3. Service charges are already included in the bill in most restaurants and cafes. As a rule, tips range from 12 to 15% of the total order. If the tip is not included in the total amount, you should simply … Open

A very beautiful wooden building with a whitewashed facade houses Hotel Bellier. This comfortable hotel is designed in accordance with the most vivid national traditions. The building is decorated with wooden beams under the ceiling, and in the lobby on the ground floor, you can see a large open fireplace. The hotel boasts of massive wooden furniture, as well as nice pictures with country motifs and original … Open

Hotel Les Barmes De L Ours is ready to offer its guests a chic choice of rooms and a first-class wellness center. The hotel is located in close proximity to Belvar ski lift and aimed at a wide range of tourists. Besides the wellness center with a large indoor pool, its infrastructure includes three restaurants, one of which is marked by the Michelin star. Sports enthusiasts will be pleased not only with excellent … Open