Detailed hi-res maps of Chambery for download or print 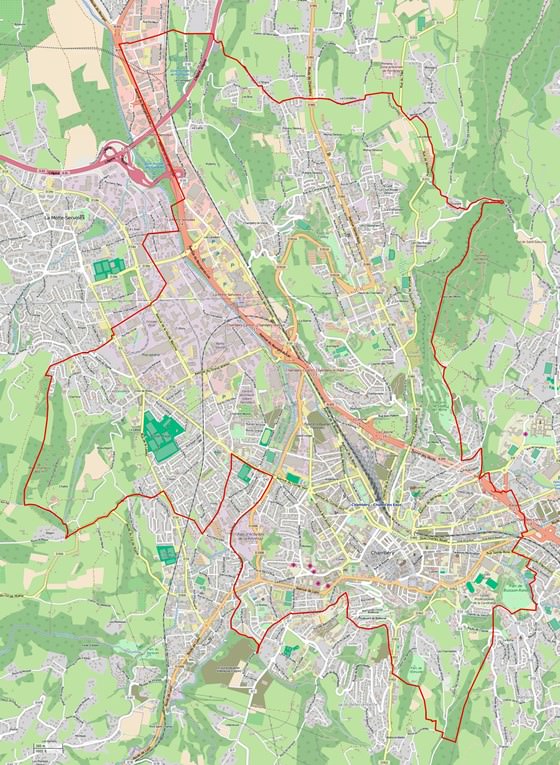 The actual dimensions of the Chambery map are 1788 X 2444 pixels, file size (in bytes) - 1156676. You can open this downloadable and printable map of Chambery by clicking on the map itself or via this link: Open the map.

City tours, excursions and tickets in Chambery and surroundings

Search for services, infrastructure and sights on map of Chambery

Our guide chapters over Chambery

Elephants in the famous fountain located in this town are the main attraction of this place. Narrow medieval streets of the old town will delight the soul of tourists who adore European architecture. Chambery prefecture is located in the ducal palace of the XIV century. Pavement made of cobbles and lanterns perfectly complement the architecture of buildings. The Holy Chapel, which is built in the gothic style, is … Open

Maps of Grenoble
An interesting fair awaits those who decide to visit Grenoble three weeks after Palm Sunday. It opens on the square near the famous monument Porte de France. The multi-faceted Grenoble Street Art Fest starts at the end of May and ends in late June. It is a bright mix of street art, that is, monumental, traditional frescoes, collages, stencils, urban sculptures, installations, ... Open »
Maps of Rhone-Alpes
Quatres Glorieuses gastronomic exhibition is held in December; the name of this festival can be literally translated as ‘Four glories.’ This large-scale exhibition brings together the best poultry producers in the region. During the exhibition, visitors have an opportunity to taste a variety of dishes cooked of poultry of the highest quality. It is considered very ... Open »
Maps of Geneva
In May, during the days of wine festivals on Lake Geneva, local winemakers open the cellars and invite guests to join such a brilliant atmosphere. These merry days are a great opportunity not only to taste good wines but also to buy your favorites, as well as to join the local traditions and cuisine of the region. In December and January, Trees and the Light festival is taking ... Open »
Maps of Chamonix
The idea of ​​organizing a music festival belongs to André Manoukian. In 2010, the event lasted only a couple of days. It has immediately caught the attention of many travelers, so next year it was decided to expand the festival program to five days. The festival involved musicians from all over the world. Cosmo Jazz is a real chance to see your favorite performers and ... Open »
Maps of Lyon
Another noteworthy event is called the Jungle Art Urban Festival, and it is organized twice a year: in late February and early September. A visit to the fest is a great opportunity to explore the local culture and art. At the Le Croiseur Theater, one can take part in art exhibitions, masterclasses (in such genres of graffiti, ceramics, screen printing), musical performances, ... Open »
OrangeSmile.com - online travel reservation expert providing reliable car rental and hotel booking services. We feature more than 25.000 destinations with 12.000 rental offices and 200.000 hotels worldwide.
Secure Server