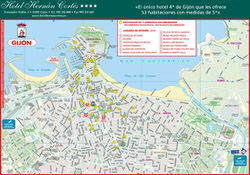 Interactive maps of hiking and biking routes around Gijon

1. You can zoom in/out using your mouse wheel, as well as move the map of Gijon with your mouse.
2. This interactive map presents two modes: 'Biking Routes' and 'Hiking Routes'. Use the '+' button on the map to switch between them.

This Gijon map has two modes: 'Railway Network' and 'Landscape & Rural Map'. Use the '+' button on the map to navigate.

Our guide to Gijon

The most important architectural landmark of the city is Gigon University that is still working now. This massive complex of ancient buildings strikes with its elegance and grandeur. Built in the middle of the last century, the architectural complex covers an area of ​​27 hectares. In addition to an abundance of beautiful buildings, there are small parks and tree-lined avenues, a walk through which will give a … Open

Traditions and mentality of Gijon

In addition to a variety of holiday items, a lot of interesting sweets and treats are sold at the market. The special Christmas delicacy is turron. On the eve of the New Year streets are decorated with aixames torches; they give the city a mysterious and romantic look. Talking about features of the local culture, we should definitely mention love for cider. The beautiful holiday is dedicated to the popular local … Open

The most vivid example of the architecture of the 20th century is the Universidad Laboral de Gijon. This building complex was officially recognized as the largest in Spain. It occupies almost 11 hectares. The university was opened in 1946. Today, some of its historical buildings are reconstructed into cultural centers that are open for everyone. In the territory of the city, you can see several unique antique … Open

6. It is customary to leave a tip for good service in local restaurants and hotels. You can leave a reward making 5-10% of the total for a waiter and about 1 – 1.5 USD for a maid. 7. Fans of photos have to consider that they mustn’t shoot strategically important objects and people in uniform. If you want to take pictures of local residents, be sure to ask for their permission. 8. Tourists aren’t … Open

However, this city is great not only for simple sunbathing. You will find here is a beautiful Museum of Bagpipes, Center of Art in Revillagigedo Palace, and Barjola (Museum of Modern Art). Corrida Street, which is allowed only to pedestrians, will also leave an unforgettable experience as it is dedicated to trading. Even the geographical position of Gijon has everything to become a successful tourist destination. … Open