Detailed hi-res maps of Santander for download or print 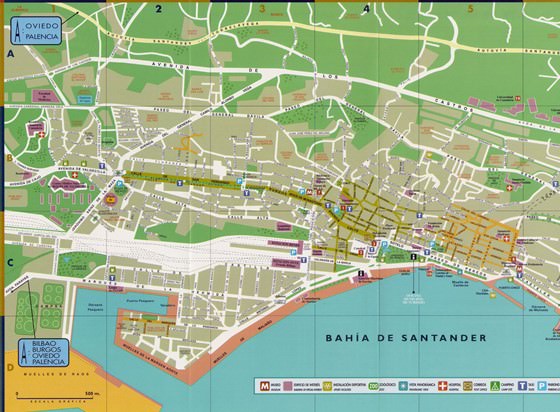 The actual dimensions of the Santander map are 1715 X 1261 pixels, file size (in bytes) - 586692. You can open this downloadable and printable map of Santander by clicking on the map itself or via this link: Open the map.
Santander - guide chapters 1 2 3 4 5 6

Search for services, infrastructure and sights on map of Santander

Our guide chapters over Santander

Santander being a popular beach resort offers its visitors an engaging entertainment program. Among city sites and landmarks tourists will find various museums and natural sites, architectural monuments and landmarks as well as remarkable architectural areas. The most significant historical landmark of the tourist destination and the most beautiful architectural construction of city is the Santander Cathedral being … Open

In a few minute drive from the city center tourists will discover the largest and the most popular day spa center named Thalasso Real offering its customers a wide choice of healing and health improving programs, about ten types of massage procedures and a rich assortment of beauty treatments. The day spa center also features a sauna and a large swimming pool. The health complex is a perfect place for a family … Open

The city of Santander is rich in gastronomy establishments hosting more than two hundreds of restaurants and cafés. Choosing the best place to eat and rest in Santander is rather challenging. One of the most prestigious eating houses of the resort city is the El Serbal restaurant which will be of great interest for those gourmands who can not imagine any meal without dainty delicacies. Among specialities of the … Open

Tourists planning a visit to the city of Santander should take into consideration several ethnic features which will sufficiently ease the vacation and add comfort to the time spent on the resort. Local folks are considered to be the most shouting nation in the world. Loud speaking in public is considered to be a norm among local residents and will not be interpreted as ill breeding. Sometimes foreign guests … Open

Several magnificent palaces survived in the city. Royal Palacio de la Magdalena is located on the territory of the beautiful country park. Its construction was completed in the early 20th century. The palace was built specially for King Alfonso and became his favorite summer residence. Eventually, the royal family lost its beautiful residence. At different times it housed a hospital, corps of the local university, … Open

5. Smoking in public areas is banned in public areas of the resort city. Tourists should necessarily pay attention to restrictive and prohibitory signs. In close vicinity to large shopping centers, restaurants, cafes and other public institutions tourists will find specially designated smoking areas. 6. An optimum way to pay for purchases and services is national currency which is recommended to be … Open