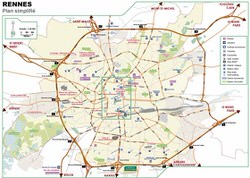 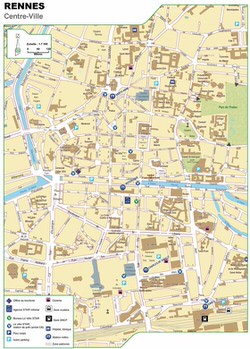 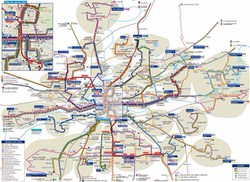 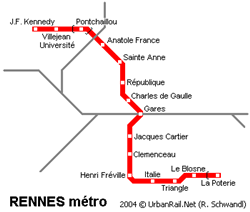 Interactive maps of hiking and biking routes around Rennes

1. You can zoom in/out using your mouse wheel, as well as move the map of Rennes with your mouse.
2. This interactive map presents two modes: 'Biking Routes' and 'Hiking Routes'. Use the '+' button on the map to switch between them.

This Rennes map has two modes: 'Railway Network' and 'Landscape & Rural Map'. Use the '+' button on the map to navigate.

Our guide to Rennes

8. The city has adopted a system of cashless transfers. Any shop, restaurant or hotel accepts international credit cards. National currency is the only accepted one. 7. Rennes is a calm and safe city. Streets along the seaside and central districts of the city are safe to explore even in the evening. Meanwhile remote areas of the city are not recommended to visit alone late at night. It is not … Open

No less picturesque is the Saint-Anna Square. Some historical sights are located nearby, as well. Beautiful Saint-Aubin church, built in the early 20th century, is considered the main site. It was constructed on the site of the destroyed old hospital, that had been operating far back as the 14th century. Nearby, is the building of the ancient Jakobin Monastery, which now houses a large conference center. A unique … Open

The L'ile du Mets restaurant specializing in French cuisine is a perfect place for organization of various festive events and romantic dates. Its hall is filled with festive atmosphere, and its rich menu includes lots of excellent dishes. Moreover the L'ile du Mets restaurant will amaze its guests with a rich wine list, even the most sophisticated wine connoisseurs will find a drink to please their tastes and … Open

Maps of Laval
Laval offers its guests a lot of interesting opportunities for organizing outdoor activities. The city has several wonderful parks, the largest and most beautiful one is called Jardin de la Perrine. It's hard to imagine that industrial quarries once covered the vast territory of the present-day park. The abandoned construction area was completely cleared of rubbish to be turned ... Open »
Maps of Brittany
Travelers preferring to devote a lot of time to entertainment are recommended to go to the capital. Rennes also differs with a good choice of shops, markets and bars, many of which are situated in beautiful historic buildings. Saint-Malo is a very pleasant place to stay. There are several beautiful parks and gardens in it, a walk through which will give a lot of impressions ... Open »
Maps of Nantes
Fans of outdoor recreation will surely appreciate the time spent at Golf De Nantes Erdre where they can enjoy not only an amazing playing experience but also strikingly picturesque views. It is also worth checking out Acrocime Rope Town if you want to spend equally active hours overcoming obstacle courses. It must be said that this kind of entertainment is suitable for all ... Open »
Maps of Angers
Besides an interesting excursion program, Angers will please its guests with a variety of entertainments. You can take a stroll in the picturesque city parks and gardens, visit entertainment centers and natural attractions located in the vicinity of the city. The city is proud of its botanical garden. Besides it, Jardin du Mail is another great place for outdoor recreation. ... Open »
Maps of Normandy
Lower Normandy is perfect for walking. There are many beautiful natural attractions and monuments in small settlements which are linked by kilometres of walking paths. You can walk around the neighboorhood, explore some of the nearby settlements or go on a real camping trip for several days. If you are fond of hiking, don’t miss a chance to cross the Bay of Mont ... Open »
Maps of Le Mans
Le Mans will please its guests with a huge selection of entertainment and recreational facilities. First of all, it is worth mentioning the wonderful parks located in the city. An interesting one is Arche de la Nature, which looks more like a country farm. It would be especially nice to visit this park in the summer. Here you can see with your own eyes how pumpkins and other ... Open »
Maps of Le Havre
Besides that, Le Havre provides great opportunities for those wishing to enjoy water activities. Thus, here you can go fishing, just pay attention to Navigation Normande. The trip turns into a fairy tale because of beautiful views of Le Havre docks, which have their own special romance. You can also take a cruise from Albatre Plaisance - this kind of leisure fully justifies its ... Open »
OrangeSmile.com - online travel reservation expert providing reliable car rental and hotel booking services. We feature more than 25.000 destinations with 12.000 rental offices and 200.000 hotels worldwide.
Secure Server