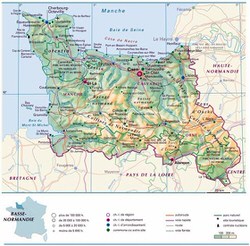 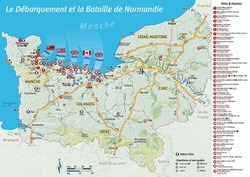 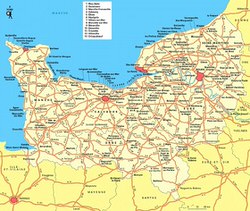 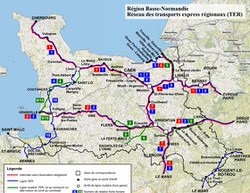 Interactive maps of hiking and biking routes around Normandy

1. You can zoom in/out using your mouse wheel, as well as move the map of Normandy with your mouse.
2. This interactive map presents two modes: 'Biking Routes' and 'Hiking Routes'. Use the '+' button on the map to switch between them.

This Normandy map has two modes: 'Railway Network' and 'Landscape & Rural Map'. Use the '+' button on the map to navigate.

City tours, excursions and tickets in Normandy and surroundings

Our guide to Normandy

Traditions and mentality of Normandy

One more important thing about locals- their love for strikes. Normans are true French, so it is not surprising. They strike almost every month here. In general, this problem concerns large cities, but if you are going to travel to Lower Normandy or go beyond it, it is better to clarify whether there is a strike of transport workers, otherwise, you can find yourself in an unpleasant situation. Locals don’t … Open

In summer, both the resorts are always crowded and welcome numerous tourists, so travelers seeking privacy and intimacy are better to pay their attention to the nearby town of Barfleur. This is an old port town that is perfect for calm beach recreation. Vacationers are also welcome to rent a boat and head to explore the nearby landmarks of the coastal area. Granville is a port town that has a regular ferry … Open

Normandy for children - what to visit

Young naturalists should definitely visit Lower Normandy. There is a large number of zoos, from usual to quite exotic, like L'Arche Feline, where your child can play with cats. You can hug and even feed the cats with special food. You should understand that your child can ask you to get a pet after visiting this place. Parc Animalier de La Dame Blanche is dedicated to farm animals. Children should follow some rules … Open

You should definitely bring something delicious from Normandy. Normans are true gourmets and there is an endless list of delicacies you should taste. The first thing every tourist should bring is a block of local cheese. You can find almost five hundred varieties of cheese here, both soft and hard, both with and without mold. The most popular sorts among tourists are Comté, Cantal, Mimolette and Laguiole. An … Open

Exclusive beach resorts represent the main feature of Basse-Normandie. The most of popular of them is Deauville, which regularly hosts the large-scale film festival. This fancy resort is only two hours away from Paris by car; it is very popular among citizens of the capital. Worldwide celebrities like to rest there, so popular artists, musicians or politics are common visitors of Deauville beach. Scenic … Open

You should definitely try famous coq au vin or rooster with wine. It is a French dish of chicken braised with wine, lardons, mushrooms, and optionally garlic. Ratatouille is a famous dish originating in Nice. It is made of stewed pepper, eggplant and squash. This dish is perfect for vegetarians. However, there is no particular recipe of ratatouille, so you can try it in different restaurants and compare the taste. … Open