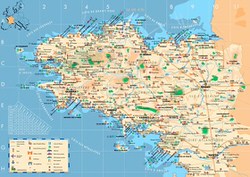 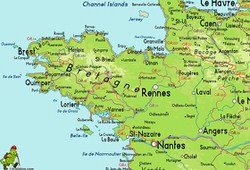 Interactive maps of hiking and biking routes around Brittany

1. You can zoom in/out using your mouse wheel, as well as move the map of Brittany with your mouse.
2. This interactive map presents two modes: 'Biking Routes' and 'Hiking Routes'. Use the '+' button on the map to switch between them.

This Brittany map has two modes: 'Railway Network' and 'Landscape & Rural Map'. Use the '+' button on the map to navigate.

Our guide to Brittany

2. Bretagne is an ideal place for gourmets. Many delicacies that are considered rarities even in neighboring regions of the country are ubiquitous in Bretagne. Because of an abundance of fish and shellfish prices of exquisite treats are very affordable at local restaurants. 3. Locals pay great respect to foreigners showing interest in local culture and traditions. They would be pleased to tell stories about their … Open

Iroise region is very quiet and almost untouched by civilization; it offers very spacious beaches. It is a popular place among eco-tourists and country vacation fans. Sea shore is busy close to resort areas, but outside of it you can easily find lots of beautiful quiet bays. Excursion fans are recommended to visit Standing Stones Shore. It is famous for unique Neolithic landmarks, as well as for its charming … Open

They always welcome new guests and treat them as good old friends. In rural places you can taste real apple cider, which is considered the national drink, and enjoy the most popular national dishes in their classical version. Don’t be surprised if the barkeeper would ask to throw a chuck in a fireplace or talk with new acquaintances, as such behavior and communication style is quite appropriate here. One of … Open