Preparing your trip to Rennes: advices & hints - things to do and to obey 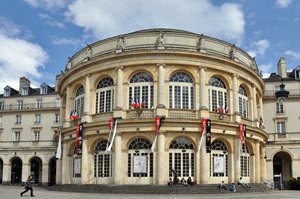 1. Tourists are recommended to have a phrase-book in French when going on a city exploration tour. Local residents treat foreign guests speaking French with respect.
2. Some upscale restaurants and entertaining establishments demand a dress-code. That is why tourists should learn the rules in advance. Tourists opting to visit ethnic restaurants need to keep in mind an important feature. Cheese can only be added with wine. Mixing cheese with other drinks in one order will be interpreted as bad manners.
3. Tips are welcome in all sorts of eating establishments from upscale restaurants to small budgetary cafes. A 5-10% addition to a total sum will be quite enough to reward a waiter. The “service compis” note in a receipt stands for a service fee being already included into a total bill. Taxi drivers and hotel maids commonly expect to get a small cash reward as well.
4. A major part of historical and cultural sights of Rennes is accumulated in a small district, so it will be much more comfortable to explore the area on foot. Travelers visiting the city for the first time are recommended to start city exploration from a tourist information center. It is located near the seaside sharing the same building with the Historical Museum. The office supplies tourists with city maps and tickets to various tours and excursions.
5. Renting a car will be an optimum way of cruising the tourist destination for travelers opting to explore the suburbs of Rennes or traveling with big company. To rent a car one will need international driving license and a credit card to cover the rent. Car travelling enthusiasts should keep in mind that heavy fines are imposed for any traffic violation. Copyright www.orangesmile.com
6. Street call boxes offer the most profitable rates for intercity and international calls. Meanwhile local hotels offer the highest rates for calling. Street call boxes accept special plastic cards, which can be bought in every news stall.
7. Rennes is a calm and safe city. Streets along the seaside and central districts of the city are safe to explore even in the evening. Meanwhile remote areas of the city are not recommended to visit alone late at night. It is not recommended to use services offered by strangers for the reasons of safety no matter how profitable and tempting an offer may seem.
Excursion over cultural sights of Rennes - 'must visit' points of interest
Massive fire badly damaged a bigger part of the historical center of Rennes at the beginning of the 18th century. Still the city has preserved several architectural landmarks and historical …

Open
8. The city has adopted a system of cashless transfers. Any shop, restaurant or hotel accepts international credit cards. National currency is the only accepted one.

Preparing your trip to Rennes: advices & hints - things to do and to obey You can re-publish this content with mandatory attribution: direct and active hyperlink to www.orangesmile.com.
Rennes - guide chapters 1 2 3 4

What to visit being in Rennes - unique sights 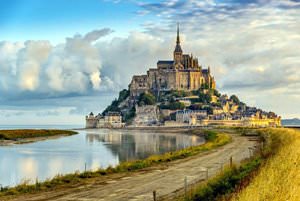 Distance from Rennes center - 62.1 km.
Many beautiful stone houses and outbuildings have been preserved on the island. They were built in the 15th-16th centuries. There is only one street in the town. It's called the Grande Rue. You can visit several interesting museums, souvenir shops, and restaurants of national cuisine while walking through it. A real town attraction is the Inn of Mother Poulard. This is a historic restaurant. The gift shop of the same name is located in the same building. Popular dishes of national cuisine are prepared according to old recipes in this restaurant. Chefs prepare most of the culinary masterpieces over an open fire. … Read further

Tips for the cities around Rennes

Laval
3. For walks around the city, it's best to choose elegant and modest clothes of neutral shades. In many restaurants and entertainment centers, there is a strict dress code, the requirements of which need to be clarified in advance. 4. Travelers who expect to use the services of local taxis should not forget to tip your drivers. The tip amount is usually 1-2 euros. 5. ... Open »
Brittany
3. Locals pay great respect to foreigners showing interest in local culture and traditions. They would be pleased to tell stories about their scenic region, including thousands of amazing legends. Indigenous people are always ready to help tourists and talk to them. 4. The mild climate makes Bretagne an attractive holiday destination throughout the year. The coldest month of ... Open »
Nantes
3. The guests of the city are recommended to set off to the Rue Crebillon district as this is exactly the place of concentration of shopping centers and elite boutiques. At the end of the season all local shops and boutiques offer grand sales. 4. Prudent tourists are advised to opt for markets to buy some foods. The most popular market place is the Talensac which features ... Open »
Le Mans
3. The historical center of Le Mans is rarely mentioned in tourist guidebooks so even some experienced tourists are not aware of its existence. Even in the midst of the tourist season, its streets are never crowded. 4. Shopping enthusiasts should look for the most interesting shops near Place de République. Here, unique art galleries and craft workshops are open along ... Open »
Le Havre
3. A funicular is one more popular form of public transport. It connects upper and lower parts of the city. The funicular runs every day except Sunday from 7:30 to 19:30. The cost of a ride is only 0.4 euros. 4. Making a bike ride is one more great way to explore the city’s attractions. In Le Havre you will find many bike rental services, where you are welcome to get a ... Open »
Brest
3. Do not forget to pay attention on your belongings in public places. There is a risk of becoming a victim of pickpockets in shopping centers, railway stations and markets. Tourists also should not leave coats and bags unattended at restaurants and cafes. 4. Visitors of restaurants should keep in mind that a dinner chosen from a card will be a bit more expensive than a ... Open »

Travelling to Rennes - advices and tips. What should be provisioned in advance, the rules you might want to follow, and the things you better avoid doing in Rennes. We help you to make your trip smooth and easy, with no unexpected surprises.