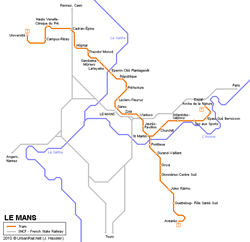 Interactive maps of hiking and biking routes around Le Mans

1. You can zoom in/out using your mouse wheel, as well as move the map of Le Mans with your mouse.
2. This interactive map presents two modes: 'Biking Routes' and 'Hiking Routes'. Use the '+' button on the map to switch between them.

This Le Mans map has two modes: 'Railway Network' and 'Landscape & Rural Map'. Use the '+' button on the map to navigate.

Our guide to Le Mans

The Le Beaulieu restaurant serving French cuisine invites visitors to continue their gastronomical journey. Its menu includes dishes of various price ranges; guests will be able to choose wine from restaurant’s cellar to complement their order. Home-cooked food is served in a cozy family restaurant Le Nez Rouge. This is a real haven of peace amid busy streets; this restaurant is also perfect for families with … Open

Traditions and mentality of Le Mans

Not everyone knows that the winners' modern tradition of spraying champagne over the crowd was born at the race in Le Mans. In the 60s of the last century, Dan Gurney won the race. During the award ceremony, organizers handed him a traditional bottle of champagne. The driver was so happy about his victory that uncorked a bottle right on a victory stand and began spraying everyone nearby. This tradition was liked by … Open

Even an ordinary walk through the city streets can turn into an exciting excursion. In Le Mans, are preserved buildings of various epochs; among them are very beautiful medieval buildings. Of particular interest are historic hotels, with each of which is bound to be a fascinating story. Some guest houses were founded in the 15th century and hosted royalty. Now, everyone can live in them. A notable Gothic-style … Open

Le Mans for children - what to visit

Jardin des Plantes is an excellent place for walking. It also has play areas for children. This park is decorated with many interesting sculptures and landscape compositions. During walks, visitors can be photographed against the background of beautiful artificial waterfalls. The park is suitable for organizing a picnic. There is another great amusement park in the city - Papea Parc. The choice of attractions … Open

15. Not far from the city, you can explore the famous Châteaux of the Loire Valley. Fans of tours should not be limited to regular walks around the historic district. 14. Apart from the famous 24 Hours of Le Mans, the city holds many other major competitions. Sports enthusiasts would be no less interested in visiting Le Mans outside the framework of this grand sports event. 13. The main tourist office is … Open

The stylish Vaud 'Bar is remarkable for being housed in one of the beautiful historic buildings. It was possible to preserve some of the original design elements of its premises so a very unusual atmosphere reigns in the bar today. Also, its guests can enjoy interesting entertainment shows quite often. Fans of relaxation in a romantic setting must visit Bibovino Wine Bar. It occupies another beautiful old building … Open