Video of flights over top monuments of Paris in HD format.
Use 'Full Screen' mode.
This review is a great opportunity to look at architectural landmarks of Paris from a new perspective – namely, from the sky. Click the video to enjoy a 3D flight over the architectural ensemble of Paris and to look at the most interesting landmarks in detail - at Arc de Triomphe, Notre Dame de Paris, Basilique du Sacre Coeur, Les Invalides, Sainte Chapelle and many others. Below you will find the most amusing historic facts and professional photographs of every famous sightseeing in Paris. 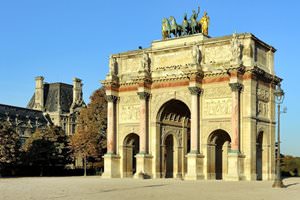 Facts:
» The Arc de Triomphe was created by Napoleon in honor of military victories of France during the Revolution and the First Empire. Triumphal arch celebrates 128 battles and more than 600 officers.
» Pylons of the Arc de Triomphe are decorated with huge bas-reliefs: Le Depart des volontaires, Le Triomphe, La Paix, La prise d'Alexandrie, La bataille d'Austerlitz, Le passage du pont d'Arcole.
» The Arc de Triomphe is surrounded by 100 granite pedestals (in honor of the hundred days of Napoleon) connected by cast-iron chains.
» Napoleon was unable to see the Arc de Triomphe during his lifetime; he only saw its layout.
» Solemn funeral ceremony with a stop under the Arch was arranged for Napoleon, Thiers, Gambetta, Victor Hugo, Lazare Carnot, McMahon, etc.
» Parisians say that twice a year, May 10 and August 1, the sun sets precisely on the historical axis and sunset can be seen through the vaulting arches, even when you are on the Champs Elysees. 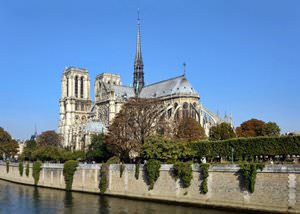 Facts:
» Construction of the temple lasted for almost two centuries.
» The Cathedral of Notre-Dame de Paris has no walls at all. All the space is occupied by pillars connected by arches. Openings of the arches feature stained glass windows.
» You can easily put a twelve-storey house in the middle nave of the cathedral (that’s the biggest of the five). Two central naves intersect each other resembling the cross on which Jesus Christ was crucified.
» The Bell Tower of the Cathedral once served as a watch tower of Paris. Hence it was possible to oversee the approaches to Paris perfectly and inform residents about the danger just in time.
»  The cathedral houses one of the great Christian relics, the crown of thorns of Jesus Christ. 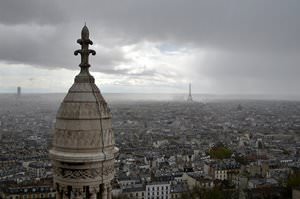 Facts:
» Sacre Coeur, literally Basilica of the Sacred Heart, is a bizarre imitation of a Byzantine church. The tower and the snow-white dome became an integral part of the Paris sky.
» The Cathedral is almost as high as the Eiffel Tower. The dome of the cathedral is equipped with an observation deck, which offers spectacular panorama, where Paris and its surroundings are clearly visible.
» The basilica owes its current name, Sacre Coeur, to the Catholic feast of the Sacred Heart of Christ, and the temple is dedicated to the memory of victims of the Franco-Prussian War.
»  There is the crypt under the altar and choral part of the basilica, where you can see church relics and the stone statue of Jesus with his glowing heart.
» The milky-white tone of Sacre Coeur is due to stone selected for constructing the Basilica. It was produced not far from Paris, in the town of Château-Landon. As it turned out, it has the property to turn white after been sprinkled by water. 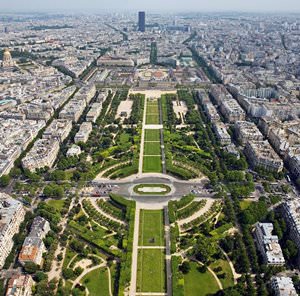 Facts:
» Les Invalides is the architectural monument and the complex of buildings, including an orphanage for disabled, shops, a pharmacy, a church and the Cathedral of St. Louis.
» About a hundred of retired French troops live at Les Invalides.
» Here is the tomb of Napoleon. It’s surrounded by 12 statues dedicated to the victories of Napoleon.
» Remains of Claude Joseph Rouget de Lisle, the author of French national anthem La Marseillaise, were moved from Choisy-le-Roi to Les Invalides and buried next to Napoleon.
» The Army Museum situated at Les Invalides is famous for its collection of medieval weapons. 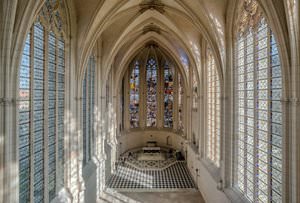 Facts:
» Sainte Chapelle is the Gothic chapel and reliquary in the former Royal Palace on the Ile de la Cité in Paris built by Saint Louis.
» Sainte Chapelle features the most complete ensemble of stained glass art of the 13th century and is considered one of the most beautiful Gothic churches of small size.
» Sainte Chapelle is a two-storey building conventionally divided into upper and lower levels, equal in size and different in height.
» The lower chapel was dedicated to the Virgin Mary; it was visited by palace servants. The upper level was aimed at royals and nobility; it was built in honor of the Holy Cross.
» More than 1,134 biblical and religious stories can be seen at stained glass windows of the Sainte Chapelle. About 700 of them have survived from the 13th century to the present day in their original form, and the rest were reconstructed.
» In order to admire beauty of stained glasses of Sainte Chapelle in full, it’s recommended to visit the chapel on a sunny day. In this case the second tier of stained glass will look just great. 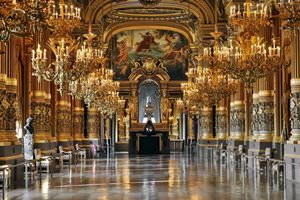 Facts:
» Opera Garnier is one of the most famous and important opera and ballet theaters in the world.
» The hall next to the main staircase is one of the most famous places of the Opera Garnier. The lobby is paved with marble of different colors and contains a double flight of stairs. The main staircase is also a theater, the scene, where once the noble audience has walked.
» There is a water tank in the basement, it serves as the foundation for greater stability and a supply of water in case of fire; it’s called ‘the underground lake.’
» The basement of the Palais Garnier houses sealed ballot boxes with 24 discs of 78 rpm; that’s a message to the future (updated in 1912), which was composed mainly of the greatest lyrical records of the beginning of 20th century. Boxes should be opened no earlier than 100 years; exactly after 100 years urns were officially removed and EMI has released a collection of three CDs.
» At the end of the 2000s about 300 hives were installed on roofs in Paris; the roof of the theater also has its own hive. 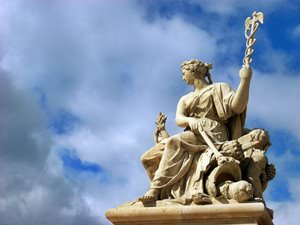 Facts:
» The Palace of Versailles was the political capital of France and home to the royal court. Today, the palace complex is one of the most popular tourist attractions in France.
» French Versailles became the prototype of the Russian Peterhof. The palace and gardens inspired Peter I for the construction of Peterhof that later became a major center to the west of St. Petersburg.
» Construction of the Palace of Versailles has taken a sum equivalent to 260 billion euros. About 30,000 workers were involved in process.
» The Hall of Mirrors is the most spectacular place in the Palace of Versailles. Its wall of 70 meters long is equipped with 17 huge mirrors with gilded sculptures and lamps between them.
» The famous Treaty of Versailles between Germany and the Allied Powers, who decided the fate of postwar Europe, was signed in the Hall of Mirrors.
» Now about 350 thousand trees grow in the territory of the palace and park ensemble. When the era of Louis XIV was in full bloom, the gardens of Versailles occupied just a grand area about 8,300 hectares.

Build your walking routes in Paris on the landmark map

Architectural landmarks in the regions around Paris

Gent
There was a cloister at the site of the present House of God in the first half of the 10th century. You can see its wooden remains in the cave. Sint Baafskathedraal has not changed since the 14th century. The construction was completed in 1569. It seems that the building is cone, which is the feature of the Gothic style. The 3.5-meter altar is considered as a relic. It was created in the Middle Ages. When its shutters are opened, ... Open »
Brussels
The Brussels Town Hall is one of the most beautiful buildings in the city, which is the symbol of Brussels. The 5-meter statue of the Archangel Michael, the patron saint of Brussels, throwing devil is installed at the 96-meter Gothic Tower. The oldest part of the town hall was built in 1420, and the other part of the building was completed a little later (in 1450). Facade of the Hall is decorated with numerous statues of nobles, saints, and ... Open »
Brugge
The Church of Our Lady is a construction that features the combination of Gothic and Roman styles. The construction lasted over 2 years and was completed in the 13th century. In the spacious church with a 122-meter tower, the only sculpture of Michelangelo, “The Virgin Mary with the Baby”, is kept. Some windows of the church have the shape of a Reuleaux triangle. Such windows are quite rare. The church is famous for the fact that the ... Open »
Luxembourg
The cathedral was named after the Mother of God in 1848. In 1613-1621, the building located in the southern district belonged to the Jesuits. In 150 years, when members of the Order were exiled outside the country, the church was given the icon of the city patroness. The house of God was named Notre-Dame Cathedral after her. It had been constructed for 8 years since the beginning of the 17th century. The updated interior is designed in ... Open »
Liege
The city Catholic cathedral is named after St. Paul. It received the status of a cathedral in the 19th century. Local worshipers asked Napoleon for this. The treasury of the church was enriched with artifacts from other destroyed temples. The relics of Saint Lambert are kept here. The founder of the church is bishop Irakli. The building acquired its modern appearance in the 13th-15th century. There are also side belfries. In 1812, ... Open »
OrangeSmile.com - online travel reservation expert providing reliable car rental and hotel booking services. We feature more than 25.000 destinations with 12.000 rental offices and 200.000 hotels worldwide.
Secure Server