Video of flights over top monuments of Brugge in HD format.
Use 'Full Screen' mode.
Our suggestion on the way to observe the most important architectural landmarks of Brugge is very simple – fly, read, watch. Thanks to our original 3D technology of flying over cities, you will be able to “visit” (see the video) and watch the most important architectural landmarks of the city - Belfort, Sint-Salvatorskathedraal, Sint-Annaplein, Church of the Sacred Heart, Kruis Gate and many others. We have carefully selected the supplementary information for each of them, including interesting historical facts and a collection of photographs. Additionally, we have placed all main sights on the map of Brugge below, since this information can be useful when you plan your walking routes in Brugge. 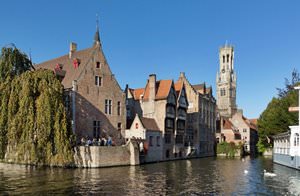 Facts:
» Belfort is a guard tower built in 1240. The tower served as an observation point, from where it was possible to see an enemy from afar.
»  The tower is 83 m high.
»  It is one of the symbols of modern Brugge.
»  At the lower level of the building, there is the Archeology Museum that houses historical relics and pieces of art. In the tower, there is an art gallery and an observation platform.
»  Belfort is also a tower with 47 bells, the biggest of which is named after Mary and was cast in the 17th century. 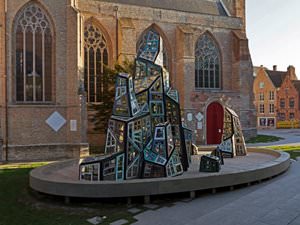 Facts:
» St. Salvator's Cathedral is located at the site of the first church founded in the 9th century. For many centuries, the building had been restored several times.
»  The church gained the status of a cathedral in 1834 when Belgium gained independence.
»  The luxurious interior of the cathedral contrasts sharply with its modest exterior. There are a lot of ancient relics and pieces of art.
»  Some artifacts were transferred to St Donat's Church. Some of them were old tapestries made upon the order of bishop Van Susteren in 1730 in the weaving factory in Brussels.
»  Here, you can also see benches, on which emblems of knights of the Order of the Golden Fleece are carved. This Order was established in 1430. Many European rulers were admitted into the Order.
»  Other old relics are paintings of medieval artists, a silver shrine with the relics of St. Donatian (1700), a memorial plate of Princess Gunhild (1087), and an organ made by master Jacobus Van Eynde in 1717. The entrance to the cathedral is free but you should pay to get to the trove.

Facts: » The Church of St. Ann was built on the ruins of the old construction at the beginning of the 17th century. The church was constructed of old bricks. It was blessed after St. Ann, the Mother of the Virgin Mary.
»  The congregation of the church was the poorest in Bruges. Beggars and hungry people came here to dine for free. In other times, up to 700 people queued for free food after a Sunday service.
»  In St. Ann’s Church, there is a huge canvass that depicts the Last Judgment. It was painted in 1685. It reminds worshipers of the Bible passage from Matthew, “...I was hungry... I was hungry... I was thirsty...”
»  After some time, the modest interior of the temple changed and was decorated with precious elements. So, it was the most luxurious church in Europe.
»  In 1830, a Belgium poet and priest Guido Gezelle who mastered 15 languages was baptized here. The copy of the document confirming his baptism is hanging near the font.
»  In 1956, the Church of St. Ann became an architectural monument.

Church of the Sacred Heart, Brugge

Facts: » The Church of the Sacred Heart is an old Jesuit church.
»  The popular sanctuary was built in the territory of West Flanders in the late 19th century.
»  The extraordinary architectural style of the church gave an impetus to the construction of the district in such a stylistic manner.
»  When architect L. Pavot created the project of the Church of the Sacred Heart, he adhered to the New Gothic style.
»  According to the original plan, the religious building was just a part of the Jesuit monastery in the Quick Shop.
»  The construction of the House of God was completed in 1885. Since that time by 1990, it had been used as a place of worship of God and the Heavenly Powers.
»  The Church of the Sacred Heart is red-brick. The interior of the construction is designed in blue colors.
»  Now, there is BRUGGE ANNO 1468 in the building. Different festive ceremonies are held here.
»  The facade of the religious construction is asymmetrical due to a tower near it. The tower has the shape of a square and consists of four separate levels. The exterior of the church maintains its uniqueness and makes it unusual.

Facts: » The Kruis Gate is one of the oldest attractions in Bruges. It was built in the 14th century.
»  Originally, the renowned gate served as a fortification. However, only the moat and the portal have survived to the present day. The walls of the gate were destroyed in the 19th century.
»  Visitors of the Bruges attraction believe that if they go through the gate three times, their deepest desire will come true.
»  Several centuries ago, soldiers prayed to God when they go through the Kruis Gate. This way, they asked Him for blessing in their motherland.
»  The famous construction is also called Kruispoort in Flemish.
»  The Kruis Gate is located in Langestraat near the channel. Several years ago, a big wooden draw bridge was constructed above the channel. The citizens of Bruges could raise the bridge not to let the enemy enter the territory of the city. Nowadays, there are two bridges, big and pedestrian.

Facts: » The Stadsschouwburg Museum is located in Bruges. It is one of the most significant theatres and concert halls in the capital of West Flanders. The building is a platform for national and international top projects but it is also used by local cultural and art organizations.
»  The Bruges City Theatre was built in 1869. Today, it is one of the well-preserved theatres in Europe.
»  The building complex was designed in the New Renaissance style.
»  The hall with red velvet seats can accommodate about 700 spectators.
»  The Stadsschouwburg Museum is famous for its monumental chandelier.
»  In 2005, about 200 photos of naked people were taken in the theatre. It was a photoshoot held by a famous photographer SpencerTunick. These photos have been included in the collection and become popular all over the world.
»  Before the construction of the famous construction, it was necessary to demolish 45 residential houses. 150 citizens had to search for a shelter. These fundamental measures let the theatre find its place in the center of Bruges.
»  The City Theatre was built by the project of Gustave Saintenoy who won a competition dedicated to the construction of this significant building.

Cathedral of Christ the Savior, Brugge

Build your walking routes in Brugge on the landmark map

Architectural landmarks in the regions around Brugge

Gent
There was a cloister at the site of the present House of God in the first half of the 10th century. You can see its wooden remains in the cave. Sint Baafskathedraal has not changed since the 14th century. The construction was completed in 1569. It seems that the building is cone, which is the feature of the Gothic style. The 3.5-meter altar is considered as a relic. It was created in the Middle Ages. When its shutters are opened, ... Open »
Brussels
The Brussels Town Hall is one of the most beautiful buildings in the city, which is the symbol of Brussels. The 5-meter statue of the Archangel Michael, the patron saint of Brussels, throwing devil is installed at the 96-meter Gothic Tower. The oldest part of the town hall was built in 1420, and the other part of the building was completed a little later (in 1450). Facade of the Hall is decorated with numerous statues of nobles, saints, and ... Open »
Rotterdam
The Euromast is a skyscraper in the form of the mast. The City Hall declared the competition of the construction of the extraordinary object. The Dutch architect won it. The Euromast was built in 1960 in conjunction with the tenth international Floriade exhibition. The Euromast is 9 m. The walls are about 30 cm thick. Its foundation is a solid block that weighs 1 900 tons. It makes such a thin construction more stable. There are ... Open »
The Hague
The quadrangle building is built of granite, light quarry sandstone, and red brick. There is a courtyard with a fountain bowl created in Copenhagen. There is also a garden designed like English landscapes. In the Peace Palace, legal proceedings and arbitration court hearings take place. This place is an indisputable institution of justice incorruptibility. Many countries contributed to the construction. When the First ... Open »
Amsterdam
The Royal Palace is one of the three palaces in the Netherlands at the disposal of the monarch. The palace has been built to serve as a town hall in the Golden Age. Later, the building became the royal palace of King Louis Napoleon, and later it was converted into the Dutch royal palace. At present, the venue is used by the monarch for entertaining and formal events. New Year's court is annually held there. Numerous halls and galleries of the ... Open »
OrangeSmile.com - online travel reservation expert providing reliable car rental and hotel booking services. We feature more than 25.000 destinations with 12.000 rental offices and 200.000 hotels worldwide.
Secure Server