Video of flights over top monuments of Brussels in HD format.
Use 'Full Screen' mode.
This review is a great opportunity to look at architectural landmarks of Brussels from a new perspective – namely, from the sky. Click the video to enjoy a 3D flight over the architectural ensemble of Brussels and to look at the most interesting landmarks in detail - at Brussels Town Hall, Atomium, Law Courts, La Monnaie, Royal Museum of Armed Forces and many others. Below you will find the most amusing historic facts and professional photographs of every famous sightseeing in Brussels. 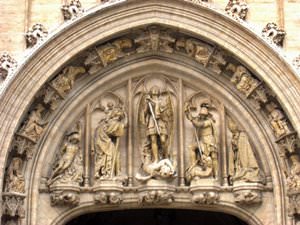 Facts:
» The Brussels Town Hall is one of the most beautiful buildings in the city, which is the symbol of Brussels.
» The 5-meter statue of the Archangel Michael, the patron saint of Brussels, throwing devil is installed at the 96-meter Gothic Tower.
» The oldest part of the town hall was built in 1420, and the other part of the building was completed a little later (in 1450).
» Facade of the Hall is decorated with numerous statues of nobles, saints, and allegorical figures. In fact, existing sculpture are only reproductions, and originals are kept in the House of the King.
» The Town Hall is still used as the residence of the mayor and is available for tours. 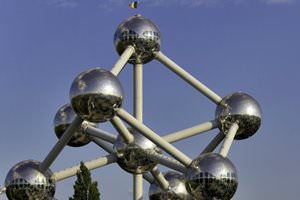 Facts:
» Atomium is another great attraction of Brussels. This building was constructed for the opening of the World Expo 1958; that’s the symbol of the atomic age and the peaceful use of nuclear energy.
» Construction of the Atomium is decorated with nine atoms united in a root fragment of the crystal lattice of iron magnified 165 billion times.
» CNN called this building the most bizarre one in Europe.
» The height of the entire structure is 102 meters, and the weight of the structure is about 2,400 tons. The diameter of each of the nine areas of construction is 18 meters.
» Six areas are available for visit. In the mid-pipe of the building, connecting the central sphere there is an elevator. It’s capable to lift the visitors to the restaurant and the viewing platform located in the highest ball of Atomium in 25 seconds. 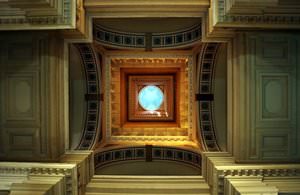 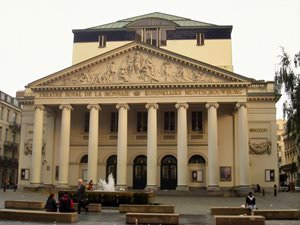 Facts:
» La Monnaie has being among the leading European opera venues in recent decades.
» In 2011, La Monnaie was considered the best of the major opera houses.
» Festivals of theatrical performances and various creative competitions are often held there.
» Tours around the premises and theater workshops are held on Saturdays.
» The building of la Monnaie was built in 1855; that was the third construction for the theater. Auditorium houses 1,150 people, and the foyer is designed for 250 seats. 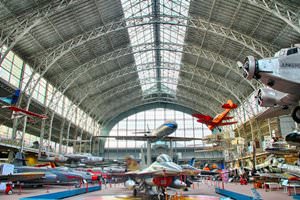 Facts:
» The Royal Museum of Armed Forces is the military history museum opened in 1923.
» The museum's collection is one of the largest military collections in the world.
» The museum has the separate pavilion of 100 meters long, which displays military aircrafts from the very first models of airplanes to modern jets. In addition, the museum even has a special tank yard.
» A lot of the exhibits are devoted to the first and second world wars.
» The museum has a huge collection of weapons, including cold and small arms, artillery, tanks, cars, planes, uniforms and equipment of the soldiers, and objects of military life. The museum also represents a variety of weapons dating back to the Middle Ages. 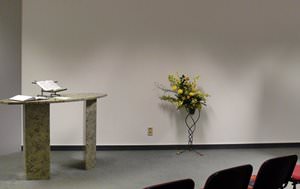 Facts:
» The Chapel Church is one of the oldest churches in Brussels, the first mention of which dates back to 1134 year. During its long history the church has undergone many changes; it has repeatedly been destroyed and rebuilt.
» There are graves of local nobility and famous people inside the church.
» Nowadays, the Chapel Church is the parish church of the Polish Catholic community in Brussels.
» You can see the entire collection of paintings, sculptures and stained glass inside the temple.
» The church regularly hosts a variety of concerts. It’s open to visitors all year round.

Facts: » Halle Gate is the medieval gate and the only surviving fragment of the city wall of Brussels.
» Currently the building is used as a museum.
» The exact date of construction is unknown, but according to archival documents construction refers to the period between 1357 and 1373.
» In addition to defense and customs, in the 17th century the gate began to carry out the function of the prison.
» Currently gate is used as a branch of the Royal museums of Art and History. Exposition of the museum is devoted to the history of the gate itself, ancient weapons and Medieval history of Brussels.

Church of Our Blessed Lady, Brussels

Facts: » The Church of Our Blessed Lady is one of the clearest examples of temples built in the late Gothic style.
» The Church was built in the period from 1400 to 1594. It’s located near Small Sablon Park that was laid in honor of the great men of the sixteenth century.
» The church building is decorated with beautiful stained glass windows; bright interior lighting is turned on in the night.
» Since its construction in 1784, the church has being serving as the burial place for noble aristocratic families.
» The church is famous for its numerous sculptures adorning the facade of the building, its grounds and interior.

CONTINUE - PART II »»
This guide to architectural sightseeing in Brussels is protected by the copyright law. You can re-publish this content with mandatory attribution: direct and active hyperlink to www.orangesmile.com.
Brussels - guide chapters 1 2 3 4 5 6 7 8 9 10 11 12 13 14 15 16

Build your walking routes in Brussels on the landmark map

Architectural landmarks in the regions around Brussels

Gent
There was a cloister at the site of the present House of God in the first half of the 10th century. You can see its wooden remains in the cave. Sint Baafskathedraal has not changed since the 14th century. The construction was completed in 1569. It seems that the building is cone, which is the feature of the Gothic style. The 3.5-meter altar is considered as a relic. It was created in the Middle Ages. When its shutters are opened, ... Open »
Brugge
The Church of Our Lady is a construction that features the combination of Gothic and Roman styles. The construction lasted over 2 years and was completed in the 13th century. In the spacious church with a 122-meter tower, the only sculpture of Michelangelo, “The Virgin Mary with the Baby”, is kept. Some windows of the church have the shape of a Reuleaux triangle. Such windows are quite rare. The church is famous for the fact that the ... Open »
Liege
The city Catholic cathedral is named after St. Paul. It received the status of a cathedral in the 19th century. Local worshipers asked Napoleon for this. The treasury of the church was enriched with artifacts from other destroyed temples. The relics of Saint Lambert are kept here. The founder of the church is bishop Irakli. The building acquired its modern appearance in the 13th-15th century. There are also side belfries. In 1812, ... Open »
Rotterdam
The Euromast is a skyscraper in the form of the mast. The City Hall declared the competition of the construction of the extraordinary object. The Dutch architect won it. The Euromast was built in 1960 in conjunction with the tenth international Floriade exhibition. The Euromast is 9 m. The walls are about 30 cm thick. Its foundation is a solid block that weighs 1 900 tons. It makes such a thin construction more stable. There are ... Open »
Aachen
The Roman Emperor wanted to build a palace with a prayer room. For this, architects from Rome and Byzantium were invited. Charles the Great was buried here. The sacred place with his remains has survived to this day. The prayer room is octagonal. Arched vaults are decorated with colorful stones. Wall panels are covered with mosaics. A 12-m forged chandelier is lead. It symbolizes celestial Jerusalem. It was gifted by Frederick ... Open »
OrangeSmile.com - online travel reservation expert providing reliable car rental and hotel booking services. We feature more than 25.000 destinations with 12.000 rental offices and 200.000 hotels worldwide.
Secure Server