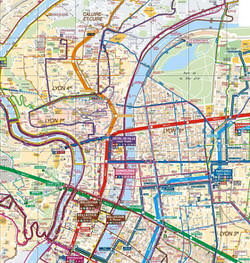 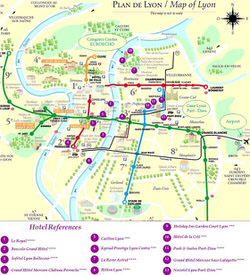 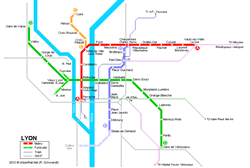 Interactive maps of hiking and biking routes around Lyon

1. You can zoom in/out using your mouse wheel, as well as move the map of Lyon with your mouse.
2. This interactive map presents two modes: 'Biking Routes' and 'Hiking Routes'. Use the '+' button on the map to switch between them.

This Lyon map has two modes: 'Railway Network' and 'Landscape & Rural Map'. Use the '+' button on the map to navigate.

Our guide to Lyon

Lyon is a large city in France that is located near Saone and Rona Rivers. The population of Lyon estimates over 1 million of inhabitants with suburbs. The city was founded yet during ancient Roman times. At that time Lyon was called the capital of three Gauls. Such high political importance of this place has quickly led to economic, religious, military and political development. As Lyon was one of the well-developed … Open

An interesting tourist attraction is Metallic tower of Fourviere. The steel tower closely resembles the Eiffel Tower with its appearance. The height of this unique construction is 85.9 meters, and weight is 210 tons. At present, the tower is closed to the public, but the tourists still come to admire the sight and make a memorable photo. A unique collection is represented by the Museum of Gallo-roman … Open

Perhaps one of the most favorite holiday destinations among tourists is Aquarium Grand Lyon. It is located in the immediate vicinity of Lyon. It houses a fascinating collection of deep sea inhabitants. Tiny exotic fish swim in aquariums with beautiful colorful lighting; next you can see sharks and other predators, whose laid-back moves are simply fascinating. Aquarium visitors can watch the process of sharks feeding, … Open

It’s worth to start a story about the best restaurants of Lyon with Les Compagnons, as this French restaurant has gained immense popularity among travelers. Pleasant interior, an abundance of local food and French wines, reasonable prices and carefree atmosphere are main distinguishing features of this popular place. The d'Olivier restaurant is also very attractive; it is a great place for a romantic dinner. In … Open

Traditions and mentality of Lyon

The Festival of Lights is considered the most striking cultural event in the Lyon. Festival takes place in mid-December and lasts for four days. Holiday attracts illumination experts from different countries. The festival is accompanied by a number of interesting events, including performances by musicians and acrobats, light shows and fairs. The most exciting and captivating performances are held in the evening, … Open

The most unusual museum in Lyon is the house-museum of the Lumiere brothers. It is housed in a luxurious historical building and is entirely dedicated to the discoverers of cinema. The building in which the museum is housed was previously owned by the Lumière family. The brothers opened their first workshop and conducted the first experiments on image transmission here. Among the exhibits of this museum are the … Open