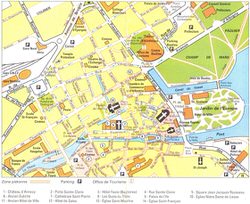 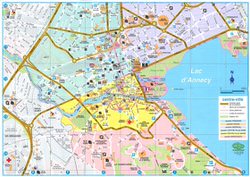 Interactive maps of hiking and biking routes around Annecy

1. You can zoom in/out using your mouse wheel, as well as move the map of Annecy with your mouse.
2. This interactive map presents two modes: 'Biking Routes' and 'Hiking Routes'. Use the '+' button on the map to switch between them.

This Annecy map has two modes: 'Railway Network' and 'Landscape & Rural Map'. Use the '+' button on the map to navigate.

Our guide to Annecy

Annecy Church is another sight that deserves the attention of visitors. This is the Roman Catholic Church of St. Maurice that was built many years ago. Initially, the church had a gothic look that was typical for the 15th century. At that time, the building looked like a Dominican chapel. There are still some drawings of that period in the church. One of these paintings is in the left part of the building, near the … Open

Eglise Saint-Maurice is the oldest church in Annecy, so it is no less interesting to visit it. The gorgeous Roman Catholic church was built in the 15th century. Eglise Saint-Maurice is located in a cozy area overlooking a canal. Many elements of inner décor that visitors can see today were built more than three centuries ago. Do not miss an opportunity to sit on vintage church chairs made by local masters yet at … Open

It is important to mention that Lake Annecy is a popular center of water sports. It frequently hosts canoeing competitions. Everyone can try waterskiing here or learn the basics of other water sports. If you are not a fan of such activities, book a walking or cycling excursion in the neighborhoods of Annecy. A great number of interesting routes are laid in the countryside. Participants can admire mountain views, … Open

Fromagerie Pierre Gay is one of the oldest grocery shops in the city, it opened in 1935. Starting from its establishment and to this day, the shop has been selling the best cheese. Fromagerie Pierre Gay usually has around a hundred different cheese varieties in stock. Visitors can purchase the best cheese from local farms and rare cheese types from other regions of France. You can sample and purchase high-quality … Open

Maps of Albertville
Those who enjoy active tourism will definitely find entertainments to one's liking. In the Pays d'Albertville touristic mansion you will be able to enjoy all kind of watersports including water skiing and wakeboarding, fishing and swimming in the blue-water pools. Fans of tennis can upgrade their skills at the local courts - Tennis Olympique Albertville. Here you will find ... Open »
Maps of Geneva
Walks on the steamers on the Lake Geneva, too, remain at the peak of popularity among tourists. But not every tourist will be able to afford such an expensive entertainment. If you are looking for the more economical variant, we have found for you a worthy alternative to expensive water excursions - to have a ride on miniature boats along the lake. These boats are the part of ... Open »
Maps of Chamonix
In summer, excursions to the Lac Blanc enjoy great popularity, as path to it runs along the incredibly beautiful mountain terrain. Families can have a great time in Chamonix Sport Aventure. It offers a huge range of entertainment options, from skiing to skydiving. In warmer months, Parc de loisirs becomes a wonderful holiday destination; its territory has a decent selection of ... Open »
Maps of Meribel
The biggest number of hiking routes is available for tourists in the warmer months. They can stroll through the most beautiful mountainous regions and centuries-old forests. Near the resort, there is a network of picturesque lakes, which become the most attractive places for fans of summer vacations. The lakeshores are covered with rich vegetation, rare species of animals and ... Open »
Maps of Courchevel
Have a great time in Family Park where visitors can sit a bar surrounded by loved ones and share their impressions of an unforgettable holiday in the resort town. And all this in the midst of majestic mountains, which guarantees a wonderful mood. Here there is also an opportunity to arrange a picnic, and the nearby trails are ideal for beginners, as well as for training small ... Open »
OrangeSmile.com - online travel reservation expert providing reliable car rental and hotel booking services. We feature more than 25.000 destinations with 12.000 rental offices and 200.000 hotels worldwide.
Secure Server