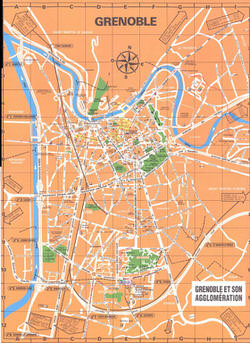 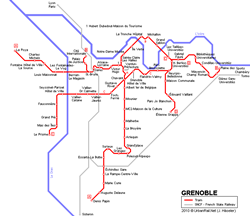 Interactive maps of hiking and biking routes around Grenoble

1. You can zoom in/out using your mouse wheel, as well as move the map of Grenoble with your mouse.
2. This interactive map presents two modes: 'Biking Routes' and 'Hiking Routes'. Use the '+' button on the map to switch between them.

This Grenoble map has two modes: 'Railway Network' and 'Landscape & Rural Map'. Use the '+' button on the map to navigate.

Our guide to Grenoble

Grenoble has excellent upscale hotels. One of such is Le Grand Hotel Grenoble which occupies a spectacular historic building near Gre’net Square. Clients of this hotel have access to a large selection of stylish clubs and extravagant rooms. There are also sophisticated suites distinguished by their impressive area and the presence of panoramic windows as tall as the walls themselves. All the rooms are furnished … Open

One of the most high-end design hotels in Grenoble is Okko Hotels Grenoble Jardin Hoche. Its rooms are decorated in snow-white tones and complemented with accessories as well as fabrics of light blue, lilac, or cream shades. The hotel has a lot of exceptional features – an abundance of interesting partition doors and designer furniture made from natural wood, assorted fashionable lamps, and light fixtures, natural … Open

In the city, there are elite shops focused on the most affluent customers. Lombard Joaillier store specializes in selling luxury watches from world-known manufacturers. Here, you'll find luxurious Brethiny watches, at a cost of about 5000 euros, or choose more affordable Hermes watches. Moreover, it has a wide choice of jewelry at a considerable price. In Grenoble runs a wonderful Galeries Lafayette center, which … Open

Hotels with history of Grenoble

Many attractive historic hotels still exist in Grenoble. Surrounded by beautiful gardens and located in Place Victor Hugo, is the Hotel d Angleterre Grenoble Hyper-Center. This hotel occupies a spectacular historic building with a simple facade and tall narrow windows. The rooms made available to guests are full of aristocratic charm and were decorated using genuine antique furniture and priceless works of art. … Open

4. The period from July to August is considered the hottest time of year. During these months the temperature rarely falls below 30 degrees. Travelers, who expect to devote much time walking around the city, are recommended to make a trip during the off-season. 5. Fans of gastronomic tourism should definitely not forget to buy Guide du Dahu, which describes hundreds of restaurants, bars and cafes. … Open

Paragliding is also popular, therefore many people prefer tours from Vertige-Evasion or Parapente Grenoble. In addition to the main action - raising the adrenaline level - there is every opportunity for enjoying beautiful views of the underlying landscapes. For fans of active recreation, it'd be a good idea to visit a zipline town called Acrobastille where both adults and the smallest citizens will enjoy this kind … Open