Detailed hi-res maps of Disneyland Paris for download or print 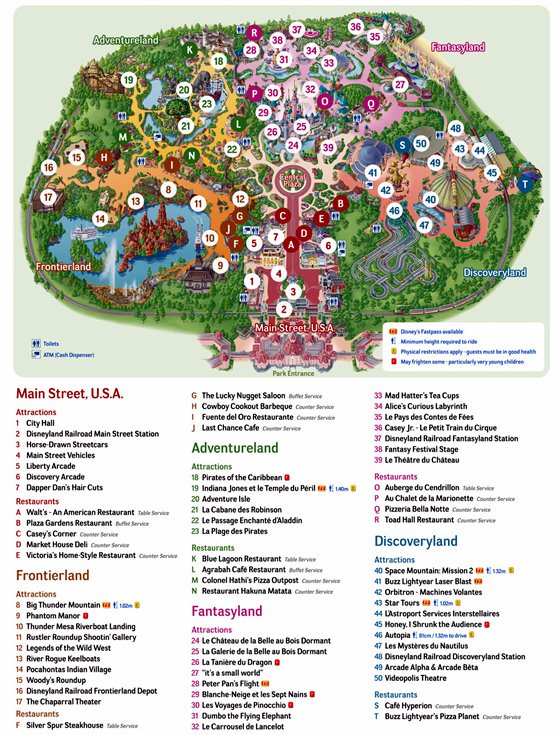 The actual dimensions of the Disneyland Paris map are 1039 X 1364 pixels, file size (in bytes) - 1279115. You can open this downloadable and printable map of Disneyland Paris by clicking on the map itself or via this link: Open the map.

The actual dimensions of the Disneyland Paris map are 1891 X 938 pixels, file size (in bytes) - 620215. You can open, download and print this detailed map of Disneyland Paris by clicking on the map itself or via this link: Open the map.
Disneyland Paris - guide chapters 1 2 3 4 5 6 7

Search for services, infrastructure and sights on map of Disneyland Paris

Our guide chapters over Disneyland Paris

This is a wonderful town and a park located not far away from Paris. It has been founded not long ago and so today its magic castles, attractions and fairytale characters will definitely not leave indifferent any visitor. Near the park entrance you will see a huge pink castle that is used as a ticket office and it sells tickets for entering Disneyland. Here you can also take a map of the park. Without it it’s … Open

Drive a bit further from Disneyland to find a marvelous castle named Chateau de Champs-sur-Marne. It was built in 1707 and was architected by Pierre Bullet who picked classicism as the main style of the building. Not only the exterior design of the castle attracts numerous visitors but also English and French gardens and the inner design of the castle that perfectly reflects trends and standards of that time. … Open

In the center of the park, on Main Street USA, there is the gorgeous Sleeping Beauty Castle. This part of the park regularly hosts fabulous parades and performances. There are many interesting shops, and this is the place where visitors can meet their favorite characters from popular animation films. In order to make it even more comfortable to stay at Main Street USA, there are many restaurants and cafes. Curious … Open

Chuck Wagon is an interesting establishment that guests of the park usually enjoy visiting. The design of this restaurant is reminiscent of a classic saloon from westerns. This is the only café in the park where visitors can try authentic “cowboy” food. A large choice of sandwiches, burgers, appetizers, and beverages is the main advantage of Earl of Sandwich. This café has a separate menu for children who … Open

Traditions and mentality of Disneyland Paris

The end of March is the time for one more amazing event, Mickey and the Magician. The theme park organizes a colorful illusionist show with such favorite children’s heroes as Elsa, Genie, Rafiki, and everyone else who possesses magic powers. On the day of the festival, magicians reveal their true magic and entertain kids with dancing, music, and incredible shows. The popular festival lasts until the beginning … Open

One of the most interesting places in the new part of the park is the studio special effects. During the day, the most incredible special effects are reproduced here, at the epicenter of which, are the visitors of the studio. There are attractions that simulate descents from spectacular roller coasters, rocket flights and meteor shower. All attractions were created with the participation of professional stuntmen … Open