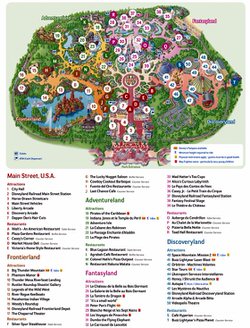 Interactive maps of hiking and biking routes around Disneyland Paris

1. You can zoom in/out using your mouse wheel, as well as move the map of Disneyland Paris with your mouse.
2. This interactive map presents two modes: 'Biking Routes' and 'Hiking Routes'. Use the '+' button on the map to switch between them.

This Disneyland Paris map has two modes: 'Railway Network' and 'Landscape & Rural Map'. Use the '+' button on the map to navigate.

Our guide to Disneyland Paris

Disneyland is a true fairytale town that has everything needed for a comfortable and exciting stay. A broad range of attractions remains the main advantage of the wonderful park. There are also attractive shops and concert halls that host interesting and fabulous shows nearly every day. The territory of the park is divided into six thematic zones, each of which has its own original entertainment venues. … Open

Chuck Wagon is an interesting establishment that guests of the park usually enjoy visiting. The design of this restaurant is reminiscent of a classic saloon from westerns. This is the only café in the park where visitors can try authentic “cowboy” food. A large choice of sandwiches, burgers, appetizers, and beverages is the main advantage of Earl of Sandwich. This café has a separate menu for children who … Open

Traditions and mentality of Disneyland Paris

The end of March is the time for one more amazing event, Mickey and the Magician. The theme park organizes a colorful illusionist show with such favorite children’s heroes as Elsa, Genie, Rafiki, and everyone else who possesses magic powers. On the day of the festival, magicians reveal their true magic and entertain kids with dancing, music, and incredible shows. The popular festival lasts until the beginning … Open

There is a real film set here, which is located in the inner courtyard of a medieval castle. The process of filming is reproduced on it very realistically, and absolutely everyone can watch it. Visitors to this part of Disneyland will have the opportunity to stroll along Hollywood Boulevard. It is an exact replica of Sunset Boulevard, which is located in Los Angeles. Along this boulevard, there are very interesting … Open

6. There is an inquiry counter near the entrance to the park. Everyone can get a free map of Disneyland there. The map is particularly useful for tourists who visit the park for the first time. It will help Disneyland guests not to get lost among numerous attractions and venues. 7. It is better to arrive in the morning in order not to miss all the interesting shows and entertaining events. Every day, a parade … Open

The theme park is so diverse that there is even Golf Disneyland. A visit to this golf course will be a true gift for everyone who likes this aristocratic game and for people who have never played golf and now want to master the basics. Besides that, when exploring the golf course, consider visiting its restaurant - it offers very delicious food. The inimitable Aquarium Sea Life Paris Val D'Europe is one more gift … Open