Cuisine of Brittany for gourmets. Places for dinner - best restaurants 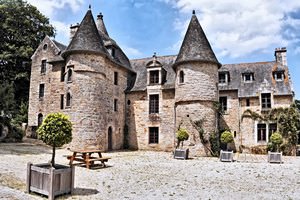 Bretagne is sometimes called ‘the land by the sea;’ the region owes its name due to the successful geographical location. However, its national cuisine is widely known not because of the abundance of seafood; the most recognizable and popular national food is pancakes. This dish is essentially different from that in a number of countries. First of all, local pancakes differ with impressive size.
Guide to Brittany sightseeing - things to see and to visit
Bretagne is located in north-western France on the vast peninsula between the English Channel and the Bay of Biscay. Its unique climate, beautiful scenery and an abundance of remarkable …

Open
The process of cooking and serving is also a very complex and demanding exercise, during which you have to keep with various traditions. Delicious sweet pancakes are cooked of white flour; they can be served with a wide variety of fillings. Galettes are popular too; those are savory pancakes cooked of buckwheat flour. The latest is also a rather peculiar attribute of the national cuisine; local residents have begun to use it many centuries ago. It was used instead of wheat flour that was considered a more expensive product.
Local cuisine is quite caloric and servings are of impressive size, because peasants and sailors were authors of popular national treats; recipes of local cuisine remain unchanged for centuries. Local restaurants would appeal to those who are fond of seafood; they serve delicious lobster, mussels and oysters. Seafood, which is considered a real delicacy in many countries, has long been a daily meal in Bretagne. Copyright www.orangesmile.com
Authentic traditions, festivals and lifestyle of Brittany inhabitants
Indigenous people of Bretagne consider themselves descendants of the Celts; they feature a very hospitable and cheerful nature. Locals are very patriotic and treat the national culture with …

Open
The region has dozens of oyster farms; locals prefer to eat this exquisite product raw, sprinkled with lemon juice and with a glass of white wine. Fans of less specific dishes can taste oysters cooked with cream sauce. Among other popular national dishes, Kouign-Amann, a rich cake with butter, is worth mentioning; fans of meat delicacies will appreciate kig ha farz. It is cooked of different kinds of meat in a quite original way: a linen bag is used as a ware and the main seasoning is buckwheat flour. The most common dessert is Farbreton, a sweet cake with plum stuffing, and, of course, delicious thin pancakes.

This guide to cuisine and restauraunt in Brittany is protected by the copyright law. You can re-publish this content with mandatory attribution: direct and active hyperlink to www.orangesmile.com.
Brittany - guide chapters 1 2 3 4 5 6 7

French cuisine is the standard of elegant and refined cuisine. It is widely appreciated by gourmets all over the world. Famous frog legs, cream-brulee and foie gras have made it one of the most popular, however these dishes are far from everything the cuisine of France is famous for. Traditionally, it is divided into two major directions - regional and aristocratic. The dishes of aristocratic fine cuisine are classics for many restaurants; these dishes are distinguished by the complexity of cooking and variety. The cuisine was formed during the reign of the Bourbon dynasty, Paris in those years was the center of world fashion in everything. Regional national cuisine for centuries has evolved in different regions under the influence of farming or climate specifics. … Open

Searching where to eat - restaurants and cafe on Brittany map

Cuisine and restaurants in the neighbours of Brittany

Rennes
The city of Rennes boasts a great choice of restaurants with the Le Galopin eating house being one of the most popular places to eat among foreign guests. It specializes in classic dishes of ethnic cuisine. Its menu offers a good assortment of fish dishes and original desserts. Sweets addicts will be amazed with a choice of original desserts being genuine masterpieces made by ... Open »
Brest
Brest is famous for its delicious restaurants, many of which are known outside the country. Either savvy tourists or admirers of exotic dishes will surely find dining facilities for their taste here. However, connoisseurs of meat dishes and seafood will be especially delighted with the choice of dishes in local restaurants. A modest eatery of Le Bouche a Oreille never ceases to ... Open »
Nantes
The main feature of local cuisine and culinary art is plenty of sea foods. As a complement to inimitable dishes local restaurants offer their gusts to try some popular sorts of wine produced on the renowned wineries of Nantes. The most popular sort of sparkling wine is considered to be the muscadet. Among white wines the gros plant is best worth noticing. Nantes will be of ... Open »
Laval
In the vicinity of Laval, there are many large farms, therefore, a rich selection of seasonal vegetables is available to locals all year round. Most vegetable dishes are served in the summer season, and a rich variety of salads is particularly noteworthy. This region is one of the country's leaders in terms of the amount of watercress consumed, and wonderful lettuce is grown ... Open »
Normandy
It should be noted that you can’t become acquainted with the culture of Normandy without trying its cuisine. The thing is that the meal for Normands is a special important ritual with its own rules and traditions. Everything should be perfect here: from the appearance of the staff and serving of the dishes to the interior of the restaurant, music, and company you have dinner ... Open »
Le Mans
Among vacationers staying at Le Mans, local restaurants are considered the most popular. However, among diverse gastronomic establishments, restaurants and cafes that specialize in a variety of culinary traditions can be selected. Near the center of the city is well-known French restaurant, L'auberge des 7 plats. Both great connoisseurs of French cuisine and those who are used ... Open »

Travel notes on best cuisine and restaurants of Brittany (France) on OrangeSmile.com. Famous recipes and traditional dishes and courses in Brittany restaurants. Where to eat - our recommendations on popular places in Brittany, where you can taste delicious meal and also spend a good time with your friends.