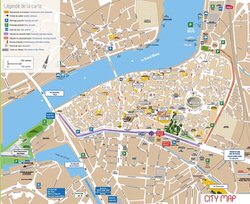 Interactive maps of hiking and biking routes around Arles

1. You can zoom in/out using your mouse wheel, as well as move the map of Arles with your mouse.
2. This interactive map presents two modes: 'Biking Routes' and 'Hiking Routes'. Use the '+' button on the map to switch between them.

This Arles map has two modes: 'Railway Network' and 'Landscape & Rural Map'. Use the '+' button on the map to navigate.

City tours, excursions and tickets in Arles and surroundings

Our guide to Arles

Arles for children - what to visit

This region has one more peculiarity – there are many old farms. For years, local people have been breeding cattle and horses in this part of the country. You can take your children to spacious pastures, watch horses, and even take several horseback riding lessons. Marshes with freshwater attract many birds in warmer months. It is possible to see the heron, pelican, different species of ducks, and singing birds. … Open

Some supermarkets in Arles are also of great interest to tourists. They are perfect for food shopping. One of the largest supermarkets in Arles, E.Leclerc Arles is a place that you cannot miss. It has a large department with wine and liqueurs. Of course, visitors can always choose from dozens of different sausage and cheese types. There is also a big department with spices and sauces. Many people visit E.Leclerc … Open

Young people enjoy visiting quest rooms in Arles. Some of the local quest providers are open in interesting historic buildings. In summer, local ancient theaters frequently host many exciting events. All kinds of festivals, music concerts, and theatrical plays entertain and amuse numerous visitors. Almost all events of this type are free to enter. Fans of strolling have one more amusing activity to try in … Open

Arles is rich in unique religious landmarks. One of the most notable churches, Ancienne Cathédrale Saint-Trophime, is located right in the city center. The first church on this site was built yet in the 5th century. That church was built from the stones obtained from the nearby ancient theater. The majestic cathedral that we can see today is a wonderful example of the Romanesque style. It was built in the mid-12th … Open

Maps of Nimes
One of the most popular clubs is TimeXperience offering several original plots to choose from: for example, to unravel the secret of the “melody of death” discovered by some composer of the early 20th century, to escape from the prison, or to smell out a double spy. Scenarios offered by X Scape Nîmes are no less interesting: here you can find rooms with post-apocalyptic ... Open »
Maps of Avignon
Travelers who plan to visit Avignon in the warm season, be sure to look into the entertainment complex La Palmeraie. This is a real paradise for sports enthusiasts, the center is in the territory of a beautiful park. Here, in the open air, there are chic pools with jumping docks, and there is a full-fledged gym in the open air and many other sports grounds. It will be very ... Open »
Maps of Montpellier
At night, other places – clubs and bars – open their doors to many people. In Montpellier, everyone will find a venue to taste. Dancers will have a good time in Le Pulp or Heat Club. Those who prefer live music and much space should visit Café Ciné and Le Labo. Wine connoisseurs can have the best drinks in Les Bulles Saint Roch and Le Chapitre. Those who prefer beer ... Open »
Maps of Aix-en-Provence
Having enjoyed a stroll in the city and suburban parks, many tourists wish to visit local entertainment centers. Bowling du Bras D'Or is a great venue not only for fans of bowling although this is a high-class bowling alley. This recreation center has a large namesake café, and so visitors can enjoy a delicious dinner and play their favorite games afterward. Bowling du Bras ... Open »
Maps of Marseille
You should also spend time after dusk with benefit and pleasure. There are many places where you can do this in Marseille. La Caravelle is a very popular local bar. Carry Nation also deserves attention. You can taste the best cocktails of the city here. Les Berthom will appeal to beer fans. Tourists who are connoisseurs of fine wines will appreciate L'Epicerie Maison ... Open »
Maps of Languedoc-Roussillon
No less spectacular is the city of Narbonne that is conventionally divided by Canal Robine into two parts. Along the canal there are numerous cultural institutions, shops and restaurants, but wonderful wineries are considered the main attractive feature of this ancient city. Sports entertainment fans would like Vover, where the range of leisure activities is just huge. Upscale ... Open »
Maps of Saint-Tropez
Those who want to ride karts, can feel all the power of the machines, while adrenaline is pulsing through their body in the wonderful center Grimaud Karting Loisir. The club Laser Forest is perfect for those who come with friends or family members – the fact is that playing laser tag is preferable as part of a team. Therefore, it is possible to not only spend your leisure ... Open »
OrangeSmile.com - online travel reservation expert providing reliable car rental and hotel booking services. We feature more than 25.000 destinations with 12.000 rental offices and 200.000 hotels worldwide.
Secure Server