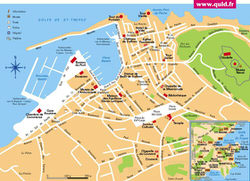 Interactive maps of hiking and biking routes around Saint-Tropez

1. You can zoom in/out using your mouse wheel, as well as move the map of Saint-Tropez with your mouse.
2. This interactive map presents two modes: 'Biking Routes' and 'Hiking Routes'. Use the '+' button on the map to switch between them.

This Saint-Tropez map has two modes: 'Railway Network' and 'Landscape & Rural Map'. Use the '+' button on the map to navigate.

Our guide to Saint-Tropez

At present a part of the fortifying construction is taken with the Naval Museum which was established in 1958. The museum acquaints its visitors with great marine past time of the city of Saint Tropez as well as gives a deep insight into the life story of sailor Suffren who gave his name to the mentioned above palace. Another recommended object to include in the city exploration program is the Museum of Annunciation … Open

Late in the evening the coastal area attracts night entertainment enthusiasts as the beach is an established place for holding of various theme parties and dancing shows. The Pampelonne beach hosts one of the most popular nightlife establishments of the city being the Maison Ocoa club offering an inimitable entertainment program. The Senequier café-bar serves its guests till late night. The eating establishment … Open

One of the most popular ethnic dishes is a thick clear soup named the Bouillabaisse made of various seafood. Each cook has a secret recipe of this treat preparation. The soup may be added with shellfish, mullet, short-horn sea scorpion, Lophius and other exotic fishes. The most popular snack served in local restaurants is cheese which is served being added only with wine. The city of Saint Tropez is known for goat … Open

Traditions and mentality of Saint-Tropez

A cultural program offered by the city is not limited to the historical and religious celebrations and holidays. The city of Saint Tropez is an established place for holding of various holidays and festivals of global scale. One of such global events is the bikers’ festival named Harley-Euro. This international meeting of bikers engages bike fans from all over the world. They arrive at the destination by bikes … Open

The ancient chapel of Saint-Eloy has a really fascinating story. For hundreds of years of its existence, it hasn't changed its exterior. Initially, the chapel belonged to a local guild of blacksmiths and shepherds. Every year on December 1, they arranged a beautiful holiday in honor of their patron Saint Eloi. Nowadays, the building of the ancient chapel houses a Protestant temple with lots of ancient design … Open

3. An optimum way to pay for purchases and services is national currency. The currency can be exchanged in any bank or a private exchange office of the city. However the resort has adopted a developed system of cashless transfers and most of the institutions and establishments accept international credit cards. Cash will be needed to pay for goods on local open markets and for visiting some beach cafes. … Open