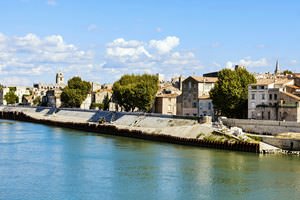 Antique landmarks of the Roman Empire period have made Arles internationally famous. The entire territory of the historic city center is a UNESCO World Heritage Site. Many tourists start their acquaintance with the city with a visit to Amphithéâtre Romain or the Arles Amphitheater. This ancient amphitheater was built in 80 – 90 AD. The arena is not as big as the worldwide famous Coliseum in Rome but it still looks truly impressive. Initially, the amphitheater was intended for 25,000 visitors. For many years, it was the main arena of gladiator fights in the region.
Family holidays with kids in Arles. How to entertain your child, things to show to children.
It is not that simple to find interesting landmarks for tourists with children in a city famous for its antique sights and museums. Arles is a pleasant exception. In addition to excursions …

Open
The amphitheater was transformed into a fortress at the end of the 6th century and more than 200 homes were built inside it. This is when the former arena turned into the central city square. The first global reconstruction of the landmark started in the 16th century. It was decided to cancel all changes and turn the arena into a venue for celebrations and other events, just like centuries ago. It was regularly hosting corrida bullfighting in the 19th century. Today, the ancient amphitheater is often the main venue for all kinds of interesting festivals and celebrations dedicated to the regional culture.
There is one more antique amphitheater approximately 100 meters away from the arena. This is Théâtre Antique or the Roman Theatre of Arles. It was also hosting various shows and entertained locals. This historic complex is in much worse condition compared to the amphitheater but it still keeps attracting the attention of thousands of tourists. The theater was built in the 1st century BC. At that time, it was one of the first stone buildings in the city. The theater was serving its primary purpose until the 5th century but it lost its importance when Christianity became the primary religion in the region. The Roman Theatre of Arles was partially demolished in the 5th – 6th century. The stones from the antique theater were used to build the first churches and houses in the city. Today, this Roman Theater hosts an international photography festival and a festival dedicated to historic films. Copyright www.orangesmile.com
Your active city break in Arles. Attractions, recreation and entertainment - best places to spend your day and night here
Excursions to unique ancient landmarks are not the only activities available to tourists in Arles. The region is famous for its beautiful nature. There are several interesting nature …

Open
Arles is rich in unique religious landmarks. One of the most notable churches, Ancienne Cathédrale Saint-Trophime, is located right in the city center. The first church on this site was built yet in the 5th century. That church was built from the stones obtained from the nearby ancient theater. The majestic cathedral that we can see today is a wonderful example of the Romanesque style. It was built in the mid-12th century. 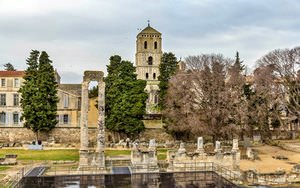 An important event for Arles happened approximately at the same time. It was decided to bring the relics of St. Trophime to the cathedral. Today, the gorgeous church is famous not only because of the multiple religious artifacts that it keeps but also because of its unique artistic design. You will have an opportunity to admire the gorgeous sculptures and paintings made yet at the beginning of the 17th century. Step inside to see an old baptismal font, several old sarcophagi, and other valuable items. The cathedral is quite large, it may take several hours to see all relics exhibited here.
Shopping in Arles - main shopping streets, outlets and boutiques
The majority of popular shops in Arles are located in the city center. There are also several good shopping malls here. La Galerie - Géant Arles is one of the largest malls in the city. It …

Open
Tourists can visit an ancient abbey in Arles - Abbaye Saint-Césaire. The first abbey on this site was built yet in the 6th century. At that time, the building was located outside the city wall and there were only several peasant houses nearby. However, Arles has grown so much over the centuries that the monastery is located in the city center now. 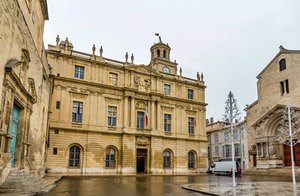 Just like many other monasteries in the country, Abbaye Saint-Césaire was nationalized during the French Revolution period. Later, the building was sold to a private individual. One of the local faith communities bought the monastery back at the end of the 19th century and used it for religious purposes. By 1995, the old abbey became abandoned. Thankfully, it received the historic heritage landmark status and was turned into a tourist attraction. A series of archaeological excavations in the museum discovered many valuable artifacts in the abbey.
Guide to Arles sightseeing - things to see and to visit
France invites tourists to visit its southern region that is the location of a truly paradise-like place – Arles. This charming city is situated in the delta of the Rhône River, not far …

Open
All precious artifacts and other valuables discovered in the region are exhibited in the main museum in Arles - Musée départemental de l’Arles antiques. The museum’s collection started forming yet in 1614. This is when the first archaeological studies were conducted in the region. The current building of the museum is new – it was built in 1995. A part of the exhibition is located in the open air. Many ancient sculptures and other monuments of that period are installed on the adjacent outdoor territory. A large part of the items exhibited in this museum date back to the prehistoric period. Visitors can see Roman sarcophagi, ritual items, old mosaics, and ancient jewelry. A collection of historic artifacts dating back to the early Christian period is one of the most interesting exhibitions in the museum. Besides that, there is an interesting collection of art.

In the section below, you can get one of our excursion, activities or city discovery tours over Arles and surroundings. Our website offers 10-30% lower ticket prices, when compared to the offline purchase on the spot.

City tours, excursions and tickets in Arles and surroundings

This guide to cultural sights Arles is protected by the copyright law. You can re-publish this content with mandatory attribution: direct and active hyperlink to www.orangesmile.com.
Arles - guide chapters 1 2 3 4 5
Reference information
Map of all palaces

Cathedrals and basilicas near Arles
♥   Basilique-Cathédrale Notre-Dame-et-Saint-Castor, Nîmes, 28 km from the center. On the map

♥   Basilique-Cathédrale Notre-Dame des Doms, Avignon, 33.8 km from the center. On the map

♥   Ancienne cathédrale Notre-Dame et Saint-Véran, Cavaillon, 37.3 km from the center. On the map

♥   Ancienne cathédrale Saint-Théodorit, Uzès, 40.8 km from the center. On the map

♥   Ancienne cathédrale Notre-Dame de Nazareth, Orange, 53.3 km from the center. On the map

♥   Ancienne cathédrale Saint-Siffrein, Carpentras, 53.8 km from the center. On the map

Photogallery of cultural heritage of Arles

Excursions over cultural sights of neighbours of Arles

Nimes
The Garden of Fountains or Jardins de la Fontaine is considered to be the age mate of the city. During the Roman epoch the place of the garden location hosted a marvelous palace. In the course of time the construction was totally ruined and a beautiful park was established on its place in the early 18th century. During a walk through the scenic park visitors will meet plenty of ... Open »
Avignon
Carthusian monastery is one more important religious landmark. The monastery was founded in 1356 by order of Pope Innocent VI. There is a fort near the monastery. On the territory of this fort is located the tomb of Innocent VI. A large part of historical buildings was almost completely destroyed during hundreds of years, but the main buildings were restored. Nowadays these ... Open »
Montpellier
A remarkable landmark of Montpellier is the Tour de la Babote being a survived part of the wall which is during the early Middle Ages surrounded the city. In the course of long history the tower has changed its look and appearance for several times and has been added with new levels meanwhile previous ones have been reconstructed. The Tour de la Babote is the only one from 25 ... Open »
Aix-en-Provence
The old bell tower, which was built in the 16th century, is located nearby. The attractive building has almost not changed its look over the centuries. The bell tower even still has the astronomic clock that was installed in 1661. A beautiful fountain is located in the center of the main square. Several attractive old streets start here. Many streets in the historic city ... Open »
Marseille
Genuinely unique landmark is the Jardin des Vestiges garden. In the middle of the past century the territory was decided to be reequipped into a shopping center however during the construction the workers discovered various ruins of ancient buildings. After the long and exhaustive work of many archeologists the historical area has become available for tourists. According to ... Open »
Languedoc-Roussillon
A huge number of historical sites are located in Cordes. There is the old citadel, and lovely wooden houses built in the 12th - 14th centuries. Connoisseurs of art should definitely visit Castres, as there is the Musee Goya in it. By the number of works of the famous artist it is second only to the Louvre Museum. Castres is also famous due to its numerous natural attractions. ... Open »

Culture guide to Arles. Which fascinating sights to visit once you are in Arles: temples, churches, museums, theaters and castles. Recommendations (with addresses, phone numbers and links) on the places 'must visit' in Arles. Plan your own city excursion by using this page info!