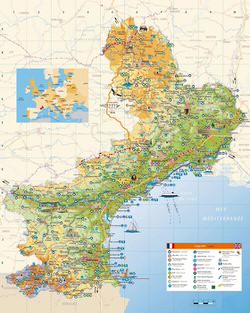 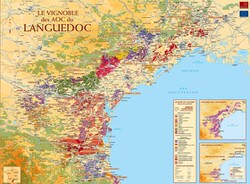 Interactive maps of hiking and biking routes around Languedoc-Roussillon

1. You can zoom in/out using your mouse wheel, as well as move the map of Languedoc-Roussillon with your mouse.
2. This interactive map presents two modes: 'Biking Routes' and 'Hiking Routes'. Use the '+' button on the map to switch between them.

This Languedoc-Roussillon map has two modes: 'Railway Network' and 'Landscape & Rural Map'. Use the '+' button on the map to navigate.

Our guide to Languedoc-Roussillon

Languedoc is very interesting from a historical perspective; each of local towns certainly has its unique historic spirit. Near Toulouse there is an ancient town of Albi, the main symbol of which is the 13th century Palais de la Berbie. Fortifications have perfectly preserved to this day; today, the castle house the interesting museum of Toulouse-Lautrec. Its collection is devoted to the life and work of famous … Open

Tourists planning to spend several days in Carcassonne should pay attention to the hotel Demeure Saint Louis. It occupies an incredibly beautiful 18th century building and is ideal for exploring sights of the region. All rooms are individually decorated and complemented by amazing design ornaments. Hotel guests have a great opportunity to relax in the amazing flower garden with a beautiful fish pond and furnished … Open

The most vibrant city of the region is Perpignan; it will appeal to those who are fond of bullfight and incendiary local dances. The city has a rather relaxed atmosphere and a measured way of life; it is an ideal destination for fans of excursions and hiking. Those who enjoy noisy urban entertainment have to visit Montpellier. In addition to world-renowned educational centers, there are lots of interesting shops, … Open

National cuisine is a unique combination of Greek, Roman and Arab culinary traditions that are embodied in classic Catalan dishes. The main distinguishing feature of the local cuisine is a combination of completely unexpected components; for example, fish here can be served with a spicy and salty ham and chicken is served with shrimp and a variety of sauces. Ham baked with peaches and duck with pears are typical … Open

Traditions and mentality of Languedoc-Roussillon

The main event is a religious holiday procession of penitents; this process may seem quite strange to foreign guests. All marchers are dressed in special costumes called caperutxa that consist of spacious capes of red and black colors with peaked caps covering face. This outfit was used during the celebration in the 15th century. The procession is accompanied with songs and drums. Travelers won’t see such an … Open

The resort of La Grande Motte is very popular with fans of beach recreation and walks along picturesque places. Its main value is vast beaches with fine soft sand. The very beautiful hilly terrain begins at the coast. There are a lot of hiking routes, during which you can climb up the hilltop, admire miraculous landscapes, and see the lakes of this district. The historical town of Leucate-Barcares located … Open