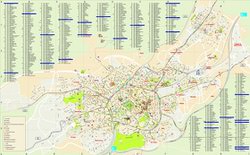 Interactive maps of hiking and biking routes around Oviedo

1. You can zoom in/out using your mouse wheel, as well as move the map of Oviedo with your mouse.
2. This interactive map presents two modes: 'Biking Routes' and 'Hiking Routes'. Use the '+' button on the map to switch between them.

This Oviedo map has two modes: 'Railway Network' and 'Landscape & Rural Map'. Use the '+' button on the map to navigate.

Unlike other holidays, Christmas in Spain is celebrated at home, in a narrow family circle. Spaniards always cook a festive duck, seafood, and sweets. After the family feast, they leave the house and gather at the Christmas tree, where they have fun all night long. At this time, Papa Noel comes to the house and leaves gifts under the tree or in special shoes. In the Basque country, children are congratulated by another character, Olentzero, who is dressed in simple homespun clothes and carries a flask with red wine. It is customary to meet New Year on the main square of the city. You need to eat 12 grapes and make 12 wishes while the clock is striking twelve. After the New Year celebration, families go home and sit down at the festive table. … Open

Our guide to Oviedo

An outstanding cultural center is the Fine Arts Museum of Asturias occupying a complex of three historic palaces. The extensive collection of this museum began to form in 1969, and now it includes more than 15, 000 exhibits. In this museum, you can see original works by famous European artists, such as Pablo Picasso, El Greco, and Salvador Dali. History buffs will be impressed by the local Archaeological Museum … Open

Oviedo for children - what to visit

The city has several interesting entertainment centers for the whole family. For example, in Laser Tag Asturias and Astur Paintball, you can have fun playing a team game. Such a pastime is the best way to increase the level of trust relations between all family members. It'd also be interesting to get acquainted with the life of local people in different eras, and for this, the city has the Centro de Interpretacion … Open

Plaza del Fontán is a historic square where the city’s most popular indoor market can be found. People come here in search of fresh vegetables and fruits, dairy products and meat delicacies, as well as other popular products of regional production. An interesting feature of the covered market is the so-called sidrerías- small bars serving apple cider. Small bottles of cider serve as popular tourist … Open

3. Governmental institutions start working not later than 9 am and serve customers till 2 – 3 o’clock. Saturday is considered to be a shortened working day and Sunday is a usual day off in Oviedo. 4. The city of Oviedo has adopted a system of cashless transfers. Large restaurants and hotels, shopping centers and stores accept international credit cards and traveler cheques. Those tourists … Open

A must-have point on any tourist route is Zoologico El Bosque, which is distinguished by the fact that in most cases animals living here were rescued, not caught just to be demonstrated to people. You can see kangaroos, raccoons, lemurs, parrots, meerkats, squirrels, turtles, tigers. Some animals can be fed, stroked, and held. Apart from the fauna, one can get acquainted with the rich flora of the region in the zoo. … Open

Festivals and events in Oviedo

September 19th is a traditional holiday for celebrating the Día de América en Asturias. The event is dedicated to Asturians who went to work in America and could return to their families only in summer. Every year, about two thousand people witness the colorful carnival, and political figures of Asturias take part in the march too. Besides the parade, visitors will enjoy a rich music program and street parties. … Open