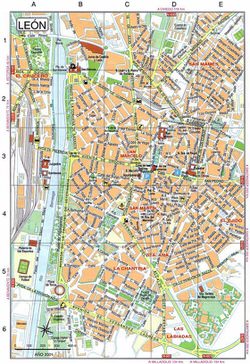 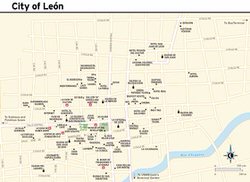 Interactive maps of hiking and biking routes around Leon

1. You can zoom in/out using your mouse wheel, as well as move the map of Leon with your mouse.
2. This interactive map presents two modes: 'Biking Routes' and 'Hiking Routes'. Use the '+' button on the map to switch between them.

This Leon map has two modes: 'Railway Network' and 'Landscape & Rural Map'. Use the '+' button on the map to navigate.

Our guide to Leon

The cultural life of Leon is versatile and original; the city hosts both beautiful ancient festivals and interesting modern celebrations. It is worth noting the special hankering of local residents to the culinary arts. During the year, lots of various culinary exhibitions, fairs, workshops and culinary competitions are held in Leon. However, the culinary tradition is not the only distinctive feature of the local … Open

While walking around the city you can see a lot of beautiful palaces and mansions. One of the most notable is the Guzmanes Palace. Once, this gorgeous palace belonged to the family of Guzmanes, who was one of the wealthiest and most notable in the region. Built in 1560, today this palace is considered one of the most beautiful monuments in the Renaissance style. Since 1882, the building has belonged to the government … Open

Those who want to diversify their vacation with interesting cultural events should visit the Casa Museo Sierra Pambley with children. This is an original museum-villa in which the setting of the past has been restored to its fullest. You can see antique furniture, works of art and collections of old books here. Young travelers will surely like to walk around this ancient mysterious house. Many beautiful places … Open

One of the best clothing stores in town is Mangas, which would be of special interest to the whole family. It sells great clothes for both men and women, and a large children's department is available here to parents. All the products presented in this store are quite affordable, while the quality of clothes will pleasantly surprise even the most demanding customers. Many come to Mangas specifically to buy shoes … Open

5. One of the main features of popular food places remain a large number of visitors. If in the evening just a couple of tables are occupied in a restaurant, then it’s not the best one and it is worth to look for another place to dine. Low quality of food and high prices may be among possible reasons for the lack of popularity. 6. In restaurants and cafes it is customary to leave a tip that is … Open

Among Leon's bars and clubs operating after dusk, there are several ones where you can fully satisfy your needs for nightlife entertainment. So, if you want to listen to quality live music and have a couple of strong drinks with friends, it would be interesting to spend time at Chelsea British Bar, connoisseurs of a cozy atmosphere should not ignore Black Dog Bar, and Glam Theatre is a perfect club for those who … Open