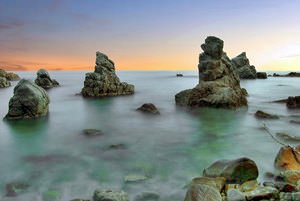 Lloret De mar is a picturesque and marvelous holiday resort of the Costa Brava which boasts perfect beaches, a variety of entertaining centers and sights. The city has preserved religious building and structures. Marvelous churches are worth attention of every tourist. The Church of Sant Romà is situated in the historical part of the city. It was built in the 16th century. In the course of the history it changed its appearance repeatedly. Since its establishment the church has preserved many unique religious artifacts. The church is annually visited by thousands o travelers who craves just to see this marvelous historical landmark and to bow to holy relics.
Shopping in Lloret de Mar - main shopping streets, outlets and boutiques
Lloret de Mar would be a real find for shoppers. In total, there are over 600 boutiques and shopping pavilions in the city. Among clothing stores, Drapps at a wide range of customers is …

Open
El monasterio de Santa Cristina is the sight of the earlier period. It was established more than seven centuries ago. Today anyone can visit the abbey and walk through its vast territory enjoying the renovated constructions of the abbey. Some of them have totally preserved the atmosphere and scenery of the foregone centuries. A strange object makes the coast line peculiar. A majestic castle proudly overlooks the sea. This is one of the youngest sights of the holiday resort. The castle was built in the middle of the 20th century. Today it is a private residence and tourists are not allowed to enter the territory of the castle.
However the travelers have a chance to visit another place of tourist interest – Castle of Sant Joan which was built in 11th century. The castle had frequently protected and rescued the city from invaders. In the course of the history the castle has been severely harmed and partially destroyed. Recently the total reconstruction of the castle was finished. The architects have managed to renovate the tower of the castle and equip an observation platform there. Those who crave to catch a bird’s eye panorama of the resort should certainly visit the Santa Clotilde gardens. These are placed at the top of the marvelous cliff. The large gardens feature unique Renascent style decoration. Copyright www.orangesmile.com
Guide to Lloret de Mar sightseeing - things to see and to visit
Lloret de Mar is one of the largest cities located on the coast of Costa Brava in the Mediterranean region. This city carefully keeps its thousand year history. It took really much time for …

Open
The city boasts a great variety of breath taking monuments and sculptures. One of the most unusual sights is the Fisherman’s Wife monument. The unveiling of the monument was held in 1966 commemorating the 1000-year anniversary of the city. Marvelous bronze monument is placed on the main beach of the resort. There are many legends considering the monument. There is a belief that if you make a wish and touch the monument the wish will certainly come true. 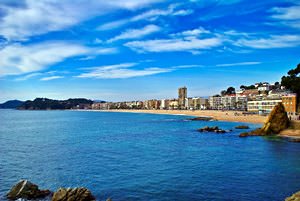 Cementiri Modernista is considered a peculiar local attraction for its beautiful sculptures, tombstones, and crypts- all of them can safely be called real works of art. However, this is not surprising - sculptors such as Anthony Maria Galissa, Josep Puig i Cadafalch, Bonaventura Conill i Montobbio were invited to design the cemetery. Last but not least, many travelers and locals like to visit the cemetery because of its pleasant atmosphere, which contributes to relaxation and pacification. The Pantheon of Costa Masia, the modernist sculpture of an angel, as well as the Gelats-Dural sculpture, stand out among the cemetery's attractions in a special way.
Family holidays with kids in Lloret de Mar. How to entertain your child, things to show to children.
There is a lot of interesting entertainment for tourists with children in the popular Spanish resort. Fans of water attractions will like the first-class water park “Water World”. This …

Open
Lloret de Mar is a great destination for archeology buffs where they can have a good time exploring ancient settlements. The fact is that several Iberian settlements have remained in the vicinity of the city - Puig de Castellet and Montbarbat. Perhaps this is one of the most atmospheric and impressive places in the Costa Brava - few others boast such antiquity. As is known, Iberians lived on the Iberian Peninsula long before the advent of the Romans. In addition to historicity, ancient settlements are also attractive for those looking for aesthetic enjoyment, offering fantastic views of the coast. 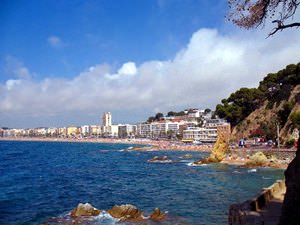 Another place where one can learn more about the history of Iberian rule in Lloret de Mar is Masia de Can Saragossa, on the ground floor of which there is an exhibition dedicated to the declining period of the ancient tribes. As for the building, it is worth a remark that it was erected before 1317 (the first written mention of the structure), after which it was reconstructed in the 15th and 17th centuries to become a family mansion in 1902, and Mañana Hotel in 1954. By 1984, the building becomes public property. When it comes to museums in Lloret de Mar, the Museo del Mar is of great interest. It has gathered a beautiful collection of exhibits, one way or another related to the local sea industry. In particular, visitors are delighted with its impressive ship model exposition.
Cuisine of Lloret de Mar for gourmet with top restaurants and cafe
Among the numerous restaurants of the holiday resort there are gastronomic establishments of various cuisines. Travelers give preference to Orient Express among other popular restaurants. …

Open
Those who want to get acquainted with the life of residents' ancestors should visit Casa Museu Can Font where the late 19th-century interior has been recreated. The mansion's interior is remarkable for paintings hanging on the walls, paving and ceramic mosaics, as well as stained glass windows. Its neoclassical building dating back to 1877 is primarily interesting for its spectacular facade. The interior can be identified as Modern, which was popular at the time. Originally, it was a family mansion, which is evidenced by the anagrams N and F on the top floor. This is nothing but the initials of the first owner. For wonderful impressions from theatrical performances, concerts, exhibitions, and fairs, head to the Lloret Futur Concert Hall - of course, after checking out some upcoming events.

In the section below, you can get one of our excursion, activities or city discovery tours over Lloret de Mar and surroundings. Our website offers 10-30% lower ticket prices, when compared to the offline purchase on the spot.

This guide to cultural sights Lloret de Mar is protected by the copyright law. You can re-publish this content with mandatory attribution: direct and active hyperlink to www.orangesmile.com.
Lloret de Mar - guide chapters 1 2 3 4 5 6 7 8 9
Reference information
Map of all palaces 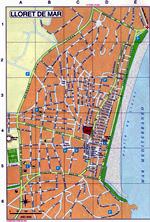 Excursions over cultural sights of neighbours of Lloret de Mar

Tossa de Mar
Fans of art are well-aware of Tossa de Mar because of the Marc Chagall Museum that is open in this town. Breathtaking sea landscapes become the inspiration for many works of the great artist. The exhibition of the museum is open in the territory of the old fortress – it was decided to open it in a restored old tower. Many of the works exhibited were created during the time ... Open »
Costa Brava
The symbol of Tossa de Mar town is Villa Vella fortress, whose name literally translates as ‘an old town.’ This is a set of powerful fortifications constructed back in the 12th century. Construction was intended to defend the town from pirates. A huge number of museums were opened In Tossa de Mar, the most interesting among them are Sea Museum and Historical Museum. The ... Open »
Barcelona
Music lovers should definitely visit Palace of Music, the hall of which can accommodate up to 1700 guests. The building of the palace is of a great interest from an architectural point of view as well. The unique design of its rooms implemented in a modern style deserves only the highest praise. The palace is the venue for various concerts for over a hundred of years. Among ... Open »
Catalonia
Excursions lovers will be interested in visiting the seaside town of Cadaqués. It is famous for its amazing natural beauty. It is home to one of the oldest monasteries in Catalunya, Sant Pere de Rodes founded in the 10th century. There are numerous beautiful castles in Catalunya; they are now open to public access. Peralada castle is situated in scenic surroundings of ... Open »
Escaldes-Engordany
Right in front of this memorial is the town's most popular religious landmark, the Church of Sant Jaume. The Roman building differs much from surrounding houses. The lombard bell tower is the most interesting part of the complex drawing tourists attention. The most unusual and the best known landmark of Escaldes is the Perfume Museum. This place is worth a visit by both women ... Open »
Andorra la Vella
One of the most remarkable architectural monuments of the city is the National Auditorium of Andorra Building constructed in 1991. The beautiful building is decorated in style of the 20th century. For many years, it has been remaining a place where concerts and other cultural events are organized. The concert hall seats up to 500 persons at the same time. Connoisseurs of ... Open »

Culture guide to Lloret de Mar. Which fascinating sights to visit once you are in Lloret de Mar: temples, churches, museums, theaters and castles. Recommendations (with addresses, phone numbers and links) on the places 'must visit' in Lloret de Mar. Plan your own city excursion by using this page info!