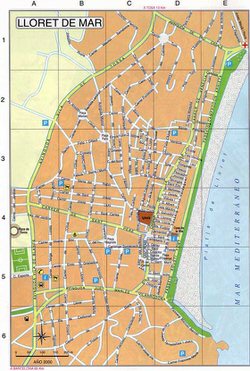 1. You can zoom in/out using your mouse wheel, as well as move the map of Lloret de Mar with your mouse.
2. This interactive map presents two modes: 'Biking Routes' and 'Hiking Routes'. Use the '+' button on the map to switch between them.

This Lloret de Mar map has two modes: 'Railway Network' and 'Landscape & Rural Map'. Use the '+' button on the map to navigate.

Our guide to Lloret de Mar

Active tourists should find time to visit Intersport that offers a huge selection of clothes and accessories for practicing various sports. For active travelers, there is a wide range of high-quality comfortable clothing and shoes perfect for hiking and cycling. Customers passionate about certain sports will also be able to get themselves some great accessories. Modern women of fashion should spend a few hours … Open

Magic Park is another excellent entertainment facility, especially for those wishing to play bowling, board games, have a great time dancing in the evening, have a bite to eat at a bar or try out some rides. By the way, here you can find one more casino, and gamblers will be incredibly happy about it. Want to focus specifically on bowling? For this, tourists and locals choose such an entertainment center as Bowling … Open

Lloret de Mar for children - what to visit

There are only a few museums in the city but one of them will be interesting to visit even with children. This is the Casa de Los Gatos Museum housed in a beautiful old villa and dedicated to cats. This museum contains an interesting collection of exhibits somehow related to these amazing animals. In the museum, you can see old paintings with the image of cats, original toys, figurines and some artworks which … Open

Another interesting attraction is a sculpture called “Dona Marinera”, whose opening took place in 1966. This sculpture depicts a woman with a raised hand, which symbolizes the sailor's wife who sees her husband off to sail. This sculpture is also located on a hill. Next to it is an excellent observation deck. The Modernist Cemetery of Lloret de Mar represents great value from an architectural and historical … Open

Another unusual monument is the Canaletes Fountain - an exact copy of the famous fountain located in Barcelona. This one was installed in Lloret de Mare in 1968, and now it is one of the favorite meeting spots for lovers. An interesting local legend has it that if a traveler drinks water from the fountain, he or she will certainly return to these places again. The aforementioned dance “les almorratxes” is … Open