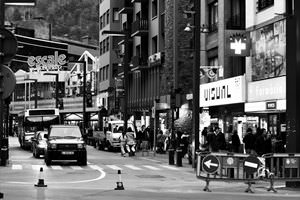 One of the major symbols of the Andorran capital is the castle Sant Vicenc d'Enclar located on the hilltop. It was built in the 9th century. The castle was constantly reconstructed and complemented with new constructions during subsequent 3 centuries. This majestic historical monument has managed to survive partially to this day. Tourists have an opportunity to see the ruins of the ancient necropolis, a few buildings preserved on the territory of the castle and Santa Coloma Church that is one of the oldest constructions in Andorra la Vella.
Winter vacations, ski slopes and resorts in Andorra la Vella
The most high-mountain European capital, Andorra la Vella, offers fans of skiing and other winter entertainments excellent conditions for their recreation. At present, beautiful gorges of …

Open
One of the most remarkable architectural monuments of the city is the National Auditorium of Andorra Building constructed in 1991. The beautiful building is decorated in style of the 20th century. For many years, it has been remaining a place where concerts and other cultural events are organized. The concert hall seats up to 500 persons at the same time. Connoisseurs of classical music and extraordinary architecture should definitely visit it.
One of the most unusual attractions of the capital is the Museu del Tabac located in the picturesque district of Santa Julia de Loria

. It will please even those who shun the bad habit all their life. The visitors of the museum can walk along old tobacco plantations and evaluate a unique exposure. The location of the museum is a building of the tobacco factory that was opened in 1909. The factory worked for almost 50 years, but then was broken due to high competition and fell into disrepair for a long time. The building of the old factory has recently been completely renovated. It became a place where a collection of exhibits dedicated to the history of the tobacco development in Andorra is kept. Copyright www.orangesmile.com
Shopping in Andorra la Vella - main shopping streets, outlets and boutiques
Shopping is the second most popular activity in Andorra La Vella. And it is the most popular activity for those who are indifferent to mountain skiing. The reason for this is that a small …

Open
Another remarkable symbol of the capital is La Valira river

. It is considered as the largest geological site in the city and in the immediate surroundings. Walking along the river banks will bring a lot of impressions. The most popular shops and restaurants are located exactly in the coastal streets. You can cross the river on the picturesque pedestrian bridge that is also included into a list of outstanding architectural monuments. 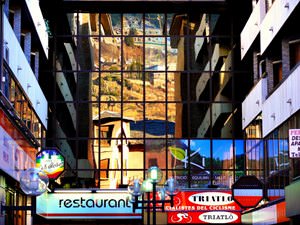 When walking along the city streets, vacationers can see a lot of interesting monuments and sculptures. One of the most attractive and most unusual is the Sculpture by Salvador Dali. This bronze sculpture is called Nobility of Time. It draws an attention not only of admirers of the great artist’s art, but also of all travelers who are not indifferent to art.
Guide to Andorra la Vella sightseeing - things to see and to visit
The capital of Andorra is well-known to fans of all kinds of recreation. The nearby ski resort attracts winter sports enthusiasts. At the same time the variety of stores and malls makes it …

Open
Among religious constructions, St. Armenol's church deserves a special attention. It is an authentic example of the Romanesque style and is distinguished by a strict and untouchable look. From afar, the old church resembles a medieval castle. Its interior furnishing fully corresponds to the strict and laconic look. The age of the church is more than a thousand years. Over the years of its existence, it has managed to remain in a pristine form and keep a lot of unique religious artifacts. There are also many interesting historical and nature attractions in the surroundings of the city. So, fans of excursions will not be bored in the capital of Andorra.

In the section below, you can get one of our excursion, activities or city discovery tours over Andorra la Vella and surroundings. Our website offers 10-30% lower ticket prices, when compared to the offline purchase on the spot.

This guide to cultural sights Andorra la Vella is protected by the copyright law. You can re-publish this content with mandatory attribution: direct and active hyperlink to www.orangesmile.com.
Andorra la Vella - guide chapters 1 2 3 4 5 6 7 8 9
Reference information
Map of all churches

Cathedrals and basilicas near Andorra la Vella
♥   Església de Sant Climent, Taüll, 55.5 km from the center. On the map

♥   Cathédrale Saint-Antonin, Pamiers, 68 km from the center. On the map

Unique spots in Andorra la Vella and near 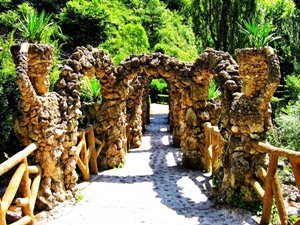 Distance from Andorra la Vella center - 46.3 km.
In Spain, there is an amazing park called Artigas Gardens. It is located in the small town of La Pobla de Lillet and is considered one of the greatest works of Antonio Gaudi. The park is located in the incredibly picturesque natural surroundings on the banks of the Llobregat river. The green zone is equipped with very comfortable stone bridges and walking paths. A great number of sculptures in the typical style of Gaudi decorate the garden. The park has secret places too. … Read further

Excursions over cultural sights of neighbours of Andorra la Vella

Escaldes-Engordany
Church of Sant Michel d’Engolasters is the oldest building in town. Built back in 12th century, it is the true incarnation of Romanesque-Lombard architecture. The church has a rich-decorated interior with reproductions of ancient frescos; originals are being stored in one of museums in Barcelona. There are also modern landmarks in Escaldes. One of them is the Casa Creu house ... Open »
Baqueira-Beret
Iglesia De Santa Eulalia is another famous historical monument. Inside, you can see not only beautiful old frescoes but also interesting religious items made of stone. The church has preserved artistic wall decoration, wood finishes, and other interesting attributes. The church rises on a small hill and has some great viewing platforms on its adjacent territory. Be sure ... Open »
Catalonia
In addition to unique religious sites, Barcelona has a vast amount of museums and cultural centers. Girona is also famous due to an abundance of famous attractions. It was built on the site of the ancient city of Gerunda that has been destroyed. Modern tourists associate Girona with Salvador Dali. The art museum dedicated to its works is located in the immediate vicinity of ... Open »
Perpignan
Today the majestic palace is one of the most impressive architectural landmarks of the city of Perpignan. It regularly holds classic music concerts and other cultural events. The palace borders on a vast magnificent garden. In close vicinity to the palace tourists will find several equipped observation platforms offering a stunning full view of the city. Guests of Perpignan ... Open »
Costa Brava
Travelers, who want to relax in a calm and relaxed atmosphere, have to visit the town of Playa de Aro, which is located on the north coast. Here you can stroll through the picturesque streets, parks and squares. The town has several attractive galleries and typical national markets. Costa Brava is famous for its nature reserves; it is a paradise for fans of ecological tourism. ... Open »
Toulouse
One of the most unusual architectural structures of Toulouse is the St Etienne Cathedral. Its construction has begun in the 11th century and lasted more than 600 years. Surprisingly, religious building was never completed. The city treasury hadn’t enough money to complete the construction. Now the old cathedral is a fascinating place storing collections of ancient ... Open »