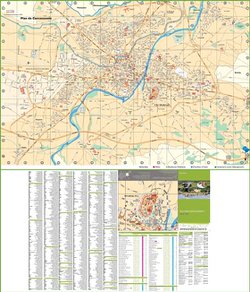 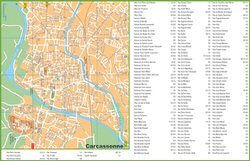 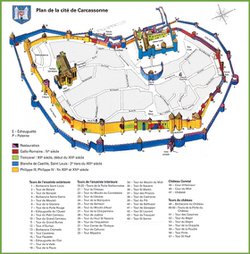 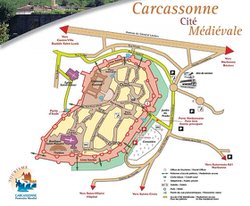 Interactive maps of hiking and biking routes around Carcassonne

1. You can zoom in/out using your mouse wheel, as well as move the map of Carcassonne with your mouse.
2. This interactive map presents two modes: 'Biking Routes' and 'Hiking Routes'. Use the '+' button on the map to switch between them.

This Carcassonne map has two modes: 'Railway Network' and 'Landscape & Rural Map'. Use the '+' button on the map to navigate.

Our guide to Carcassonne

Just like any castle city, Carcassonne has its own legends. In the 8th century, the town of Saracens was ambushed by the troops of Charlemagne. When the king of Muslims, Balaak, dies, his wife Lady Carcas took over the leadership. The siege lasted approximately five years, and people inside the fortress didn’t have enough food for such a long period of time. When only one pig and one bag of grained remained, … Open

Maps of Languedoc-Roussillon
No less spectacular is the city of Narbonne that is conventionally divided by Canal Robine into two parts. Along the canal there are numerous cultural institutions, shops and restaurants, but wonderful wineries are considered the main attractive feature of this ancient city. Sports entertainment fans would like Vover, where the range of leisure activities is just huge. Upscale ... Open »
Maps of Toulouse
A walk through local markets and shops remains the main attraction for many travelers. On Saturdays, there is a large flea market near the Basilica of St. Sernin, where you can buy a lot of interesting souvenirs and antiques. Those who prefer to bring interesting vintage items as souvenirs would like the market on the Grand Rond street; it runs on the first weekend of the ... Open »
Maps of Escaldes-Engordany
Besides that Caldea offers massage parlours and rest areas, while shopping fans can visit mall of the same name. Speaking of local shops, it's worth to mention specialized stores offering local perfumes of high quality. Escaldes also offers various clothing shops and sport fans have a chance to buy excellent downhill ski equipment. Fans of nightlife are recommended to go to ... Open »
Maps of Andorra la Vella
Charlemagne Avenue is also a popular place for walks and shopping. Besides different shops, the street is notable for a variety of recreation areas. For many years, it has been a place where exciting street festivals and holidays are held. Many tourists desire to visit the street in the evening when spectacular fountains located in its center are decorated with artistic ... Open »
Maps of Baqueira-Beret
Among the region's main natural attractions is Parque Nacional de Aiguestortes that covers an area of about 14,000 hectares. Founded in 1955, it is the largest and most important national park in Catalonia. The park occupies a vast mountainous area. The height difference in this area ranges from 1,000 to 3,000 meters above sea level. It is striking with a variety of ... Open »
OrangeSmile.com - online travel reservation expert providing reliable car rental and hotel booking services. We feature more than 25.000 destinations with 12.000 rental offices and 200.000 hotels worldwide.
Secure Server