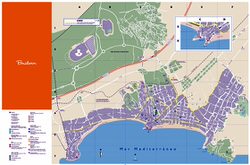 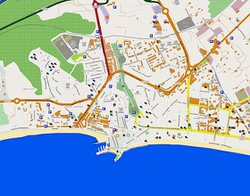 Interactive maps of hiking and biking routes around Benidorm

1. You can zoom in/out using your mouse wheel, as well as move the map of Benidorm with your mouse.
2. This interactive map presents two modes: 'Biking Routes' and 'Hiking Routes'. Use the '+' button on the map to switch between them.

This Benidorm map has two modes: 'Railway Network' and 'Landscape & Rural Map'. Use the '+' button on the map to navigate.

Our guide to Benidorm

The end of March is marked by holding Electro Weekend electronic music festival. This is perhaps the craziest party in the entire region. Music can be heard from midnight until the early hours, and visitors have fun all night long, feeling careless and enjoying the moment - in other words, do what all local people are good at. And it's contagious. There are always famous DJs among those who entertain the audience, … Open

Young tourists and fans of budget vacations would find Hotel Fetiche Alojamiento con Encanto ideal. Its main feature is romantic interior; all rooms come with stylish parquet floors, and some premises are faced with wood. An abundance of cream-colored natural fabrics and bunches of cut flowers help to set up a romantic mood. There is a variety of recreation options. Guests can visit a cozy lounge or a cafe serving … Open

Do you want to diversify vacations with something really original? Take a retro-trip to Vintage motorcycle museum, which is also located not far from Benidorm. It will be interesting not only to bikers, but for fans of vintage, as the age of some of motorcycles is a little less than a hundred years. All in all there are more than a hundred motorcycles and cars, many of which are in excellent condition. If you have … Open

5. The most beneficial way to make phone calls to other countries is to use special telephone boxes, which are located close to public institutions, shopping centers and traffic stops. You will need a telephone card to use these public phones. The cost of a card may estimate 12 or 6 euro. Cards can be purchased in any newspaper or tobacco outlets. 6. You may also find special booths for phone … Open

Travelers who prefer to stay in modest hostels also will have an opportunity to enjoy the historic setting. Hostal Pensión del Mar is located in the heart of the historic district of Benidorm. The hotel offers single, double and triple rooms arranged with solid wood furniture in style of yesteryear. Each room is paved with amazing parquet floor and decorated with stylish lamps with crystal pendants. The ground floor … Open