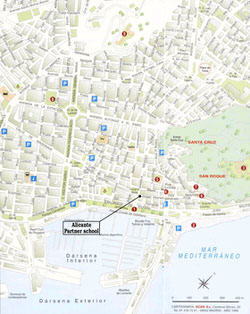 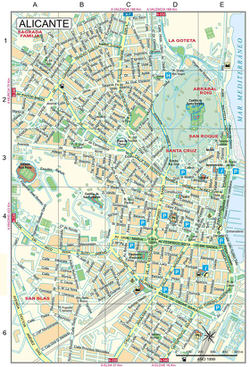 Interactive maps of hiking and biking routes around Alicante

1. You can zoom in/out using your mouse wheel, as well as move the map of Alicante with your mouse.
2. This interactive map presents two modes: 'Biking Routes' and 'Hiking Routes'. Use the '+' button on the map to switch between them.

This Alicante map has two modes: 'Railway Network' and 'Landscape & Rural Map'. Use the '+' button on the map to navigate.

Our guide to Alicante

Apartamentos Living Alicante occupies a historic building. There are 10 beautiful suites designed in romantic style. Its bedrooms are draped with fine fabrics, while a cozy sitting room has marble floors, nice wooden furniture in the yesteryear style and panoramic windows. Thus rest there will be romantic and memorable. The elite hotel Sercotel Suites del Mar is very popular among couples. That’s a single … Open

Festivals and events in Alicante

The festival of the Moors and Christians is the most famous holiday of the province of Alicante. It is celebrated in 45 cities of Spain from the 17th century in honor of the Reconquista victory over the Muslims in the 12th century. In Alicante, this holiday takes place in the first week of July and lasts for three days. During this stunning holiday, you will enjoy an endless carnival, solemn processions in … Open

Weekend in Alicante in original style

Those in search of something more extreme can go on a tour to Cuevas de Canelobre. These caves are situated not far from Alicante and are among the largest in Spain. Their vaults are so high that during the war these caves were used as aircraft hangars. Contemporaries invented another amazing task for unique natural sites; they regularly host concerts. Acoustics inside the cave is unique, and therefore millions of … Open

If you are not indifferent to the bullfight, then in the center of the city there is a famous arena for bulls, where incredible performances take place every week. And if you like amusement parks, then be sure to go to Benidorm, here you can have a great time. All the facilities here are created for both adults and children. We also advise you to visit Terra Mitica Park, which is opened from 10:30 to midnight. The … Open

2. Smoking is prohibited in public places. Violators of the rule can be punished and will have to pay large fines. However, most restaurants have special smoking areas. In hotels smoking is allowed on balconies. 3. All beaches of the city are municipal, so additional fees may be charged for the rental of sports equipment, umbrellas and sun loungers. The travellers, who expect visiting beaches … Open