Interactive map of A Coruna - search touristic spots and services

Printable maps of A Coruna 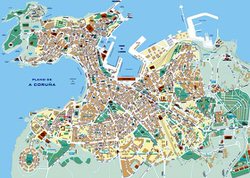 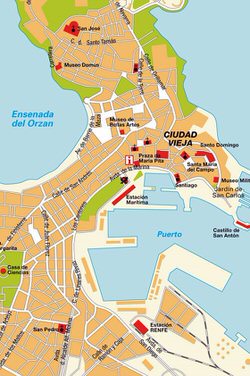 Interactive maps of hiking and biking routes around A Coruna

1. You can zoom in/out using your mouse wheel, as well as move the map of A Coruna with your mouse.
2. This interactive map presents two modes: 'Biking Routes' and 'Hiking Routes'. Use the '+' button on the map to switch between them.


Railway and landscape maps of A Coruna area

This A Coruna map has two modes: 'Railway Network' and 'Landscape & Rural Map'. Use the '+' button on the map to navigate.

Photogallery of A Coruna sights

Our guide to A Coruna

Traditions and mentality of A Coruna

Night of San Juan is an interesting holiday that celebrates the shortest night of the year. During the day, there are mass festivities on the main streets and squares, but the most important and crucial ritual events are held in the evening. As darkness fell on the coast, large bonfires are lit up and burn till the dawn. Most interesting events are traditionally held on Orzán and Riazor beaches. During the day you … Open

In La Coruna, vacationers with children will be interested to visit the Domus Museum. This interactive museum is devoted to human anatomy. Not only children, but also adults will be able to learn a lot of interesting things after its visit. In its walls, there are many amazing exhibits, for example, huge mock-ups of some genes. The museum is located in a beautiful modern building, which in itself is an outstanding … Open

A unique Huellas store specializing in inexpensive women's shoes is available to ladies in La Coruna. The cost of a pair of summer shoes here starts from 5 euros, and for 9 euros, you'll be able to pick wonderful spring-autumn shoes. The highest possible price for the most fashionable winter boots here is just about 19 euros so most customers do not limit themselves to only one pair when visiting this store. Despite … Open

1. Most shops and public institutions begin to serve customers no later than 9:00 am. During the day, the lunch break is possible that may last for two or three hours. Saturday is a half-day, and Sunday is a day off, but some of larger shopping centers are working seven days a week. 2. The most popular souvenirs among tourists are textile products and handicrafts made of ceramic. Quality clothing and … Open

Also, in the city one can find a lot of nightclubs and bars with a true "Galician" atmosphere and color. For example, A Repichoca Bar where you can listen to folk music over a glass of strong drink. Here you can also enjoy local cuisine, which makes the bar unique. Connoisseurs of beer are recommended to visit Caneca Furada Bar with its nice family atmosphere. Well, if there is a wish to try the best cocktails in … Open

Interactive maps of A Coruna neighbours