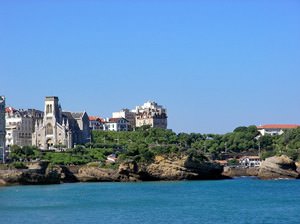 Historical Museum (Musee Historique) is known as one of the main attractions of Biarritz. The location of the museum is also very interesting – it occupies an ancient Anglican Cathedral. While enjoying the observation of the museum’s priceless collection, visitors will be able to learn the development of the city starting from the first days of its foundation until the present time. The museum exhibits vintage costumes, various objects of art, valuable historical documents, as well as many other interesting artifacts, which age is hundreds of years. Biarritz Lighthouse, the building of which was completed in 1834, remains the undisputed symbol of the city. The top of the lighthouse is equipped with an observation deck, from which visitors can enjoy a stunning Atlantic panoramic view. In order to get to the observation deck, travellers will have to overcome as many as 248 steps of a spiral staircase. However, the reward for such efforts is more than worthy. From the lighthouse’s observation deck visitors will clearly see the Pyrenees Mountains, the nearby beaches and the port area. If the weather is good, you will even see the coast of Spain.
Shopping in Biarritz - main shopping streets, outlets and boutiques
Shopping in Biarritz can turn into an unforgettable adventure. For beach accessories, tourists usually go to La Grande Plage quay. There are dozens of miniature shops selling bathing suits, …

Open
Maritime Museum (Musee de la Mer) is another important excursion destination. The halls of the museum are the location of 24 aquariums, which have already become home to 150 species of fish and other inhabitants of the deep sea. The visitors of the museum are offered to see such amazing activities as feeding the seals. Most curious visitors are welcome to attend a fascinating lecture dedicated to the diversity of the underwater world. The building, which houses the museum, is also an interesting place from the point of view of its architectural value. It was built in 1935. The Rock of Virgin is surely the most famous natural attraction of Biarritz. A high cliff, which is washed by the sea from all sides, is the location of the statue of the Virgin Mary, which was installed on the cliff in 1865. The statue has always been considered the talisman of the local sailors. For more than a hundred years the statue remains the most iconic landmark of the city. Today everyone can reach the rock by walking on a graceful bridge. The bridge was built by the famous Gustave Eiffel.
Make sure you do not forget to visit Chocolate museum, which is probably the most original museum of the city. The first chocolate factory in Biarritz appeared more than 400 years ago. Nowadays the museum exhibits a rich collection of ancient historical documents and equipment. Without a doubt, tasting pastries is one of the most enjoyable moments of excursion in this museum. There is a store not far away from the museum, where travelers can purchase gifts for loved ones. Delicious Swiss chocolate remains one of the most popular souvenirs. Copyright www.orangesmile.com
Guide to Biarritz sightseeing - things to see and to visit
Biarritz is the most beautiful and luxurious resort in the Atlantic. This city is located on the border of Spain and France, so, surely, such location is already a great opportunity to …

Open
A great walk awaits those who decide to stroll along the Port des Pêcheurs. What could be better than watching ships sailing back and forth, feeling the fresh sea air and experiencing aesthetic pleasure? Perhaps there are not a lot of things that could be as good as such a recreation. The port is a kind of hidden gem, as it is located under a steep bank. The guiding landmark is the church of Saint-Eugenie which is located just opposite it. Downstairs you can see small fishing houses and restaurants where you can savor seafood. 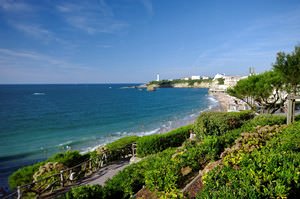 Speaking of religious monuments, there are quite a few of them in Biarritz, and each of them boasts of a distinctive feature. The most beautiful church perhaps is the Chapelle Impériale; it is even listed as a UNESCO World Heritage Site. The church is notable for the fact that its architecture is a bizarre mixture of Roman-Byzantine and Hispanic-Moorish styles. Its construction was finished in the year 1866. Another church, Église Saint-Martin, is famous for being built in the 12th century and rebuilt in the 16th century. The neo-gothic style chosen as the main style during the restructuring perfectly blends with all the other buildings surrounding the church. Everything inside the church is modest and simple.
Family holidays with kids in Biarritz. How to entertain your child, things to show to children.
Biarritz is famous for its natural, and in particular, marine beauty. Here, tourists with children have available for them, a lot of entertainment. They should definitely visit the museum …

Open
There is a church in the city for Orthodox believers. It is called Eglise Alexandre Newsky. The church was built in the year 1892. You will find it interesting to visit the church in order to enjoy its beautiful interior which is somewhat different from that of traditional Orthodox churches, but it is remarkable for this. Other interesting religious monuments include Notre Dame du Rocher and Eglise Sainte-Eugénie. The first church was built on a hill, so beautiful views of the city and its surroundings open up from here. It was built in the Gothic style, and is renowned for its laconic interior decoration. Eglise Sainte-Eugénie was built at the beginning of the 20th century in the neo-gothic style. It is nice to go inside – visitors are greeted with beautiful stained glass windows and a suspended model of a vessel. 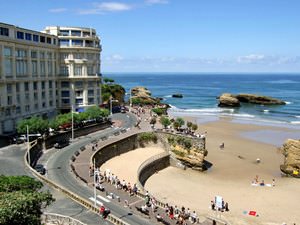 Besides the abovementioned Biarritz museums, there are a few more that should be highlighted. For example, Galerie D'art Barthelemy Bouscayrol; those who want to get to know the local culture and crafts better, as well as enjoy the beautiful architecture of the half-timbered house where the museum is located, will definitely love it here. Ateliers des Artistes de la Milady is a very interesting place – here you can look at the work of young artists, as well as buy their work if any of the art pieces interests you. Another museum for art lovers is Barthelemy Bouscayrol, where you can get acquainted with modern art.

In the section below, you can get one of our excursion, activities or city discovery tours over Biarritz and surroundings. Our website offers 10-30% lower ticket prices, when compared to the offline purchase on the spot.

This guide to cultural sights Biarritz is protected by the copyright law. You can re-publish this content with mandatory attribution: direct and active hyperlink to www.orangesmile.com.
Biarritz - guide chapters 1 2 3 4 5 6 7 8 9 10 11 12 13

What to visit during two-day excursion in Biarritz

Public palaces near Biarritz
♥   Palace 'Palacio de Arbaizenea' , 39 km from the center. On the map

Cathedrals and basilicas near Biarritz
♥   Cathédrale Sainte-Marie, Dax, 48.1 km from the center. On the map

♥   Basilique Notre-Dame de Buglose, Buglose, 56.9 km from the center. On the map 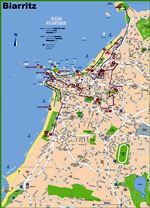 Photogallery of cultural heritage of Biarritz

Excursions over cultural sights of neighbours of Biarritz

San Sebastian
Another remarkable cultural establishment is the Museo Municipal de San Telmo which is housed in a historical building of inimitable beauty executed in the Renaissance style. The museum keeps a collection of items giving its visitors a deep insight into the history and culture of Basque. One of the most interesting halls of the museum is located in the basement. The hall ... Open »
Pamplona
A perfect place for promenades will be a scenic square named the Plaza del Castillo. In the nearest neighborhood of the square travelers will find several significant spots of tourist attraction among which the Navarra Palace deserves particular attention. This majestic sample of baroque style is free to visit. The throne room is considered to be the most beautiful one among ... Open »
Basque Country
In a place, called Azpeitia, between Deba and Bilbao, there is a marvelous baroque building – Santuario San Ignacio. In Deba itself, your attention attracts the Church of Santa Maria. It’s not only because of the date it was built – it has been located here for more than five centuries, but also because of the unusual beauty of the portico. It is known, that earlier ... Open »
Bilbao
Art connoisseurs will surely enjoy visiting the city’s Museum of Fine Arts, which exhibits a large collection of paintings by famous painters from the Middle Ages. A separate hall of the hotel is the location of a separate gallery dedicated to artists of the 20th century. The museum has already become a permanent venue for various exhibitions. This is the reason why visitors ... Open »
Lourdes
After admiring the views of the city, be sure to visit the Pyrenean Museum (Museum Pyrenees) located within the fortress walls. Its exposition is quite interesting and diverse. It includes rich collections of ethnographic exhibits as well as old many advertising posters. Part of the museum is in the open air. Among its exhibits are mock-ups of ancient buildings, miniature ... Open »
Aquitaine Region
Ironically, the oldest town hall in France was built for the well-known English king Richard the Lionheart and is located in La Reole in Aquitaine. The Perigueux city is famous not only for its Archeological Museum and Saint-Front Cathedral, built in the shape of a dome in the 12th century and reconstructed in the 15th century but also for the ruins of an ancient Roman ... Open »

Culture guide to Biarritz. Which fascinating sights to visit once you are in Biarritz: temples, churches, museums, theaters and castles. Recommendations (with addresses, phone numbers and links) on the places 'must visit' in Biarritz. Plan your own city excursion by using this page info!