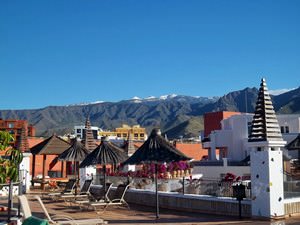 The picturesque island of Tenerife is rich with unique architectural, historical and natural attractions. Its guests are offered to visit interesting museums and cultural centers, learn about the life and traditions of the natives. In the eastern part of the island there is one of the most interesting and mysterious attractions, Pyramids of Guimar. The purpose for which first settlers have built the great pyramids remains a major mystery of the island. The main building materials in the construction of pyramids were blocks carved out of the lava fitted on top of each other without any additional reinforcing materials.
Cuisine of Tenerife for gourmet with top restaurants and cafe
An acquaintance with peculiarities of Canarian cuisine becomes one of the favorite entertainments for Tenerife guests. Perhaps the main feature of the local cuisine is a delicious malvasia …

Open
After admiring mysterious ancient sites it’s worth to go to the southern part of the island, where there is a beautiful castle of San Miguel. It is located near the picturesque town of the same name. Interesting theatrical performances are regularly organized for visitors of the castle. The castle was built relatively recently as an arena for jousting and theater; it is an exact replica of real-life medieval fortress.
Fans of natural attractions will be amazed by visit to the town of Icod de los Vinos. Here, in one of the beautiful parks the famous dragon tree (Dracaena draco) is growing; its age is more than three thousand years. It was formally proven that the tree is the oldest living organism on the planet. It resembles a huge cactus with its form. The tree attracts thousands of visitors to the town. Copyright www.orangesmile.com
Authentic traditions, festivals and lifestyle of Tenerife inhabitants
Each year, the grand carnival is held in Tenerife. It is the most striking event in the island’s cultural life. This beautiful national holiday has been celebrated since colonial …

Open
Of course, the main natural attraction and the permanent symbol of the island is the Teide volcano. All vacationers can take a walk along the slopes of the volcano and admire the incredibly beautiful Martian landscape. The fabulously beautiful national park extends next to the volcano. 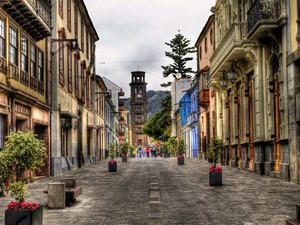 Besides architectural and cultural attractions, Tenerife Auditorium should be mentioned. This cultural center is a venue for music concerts and other events. The building of the concert hall is considered to be the most unusual and attractive architectural monument of the island. Next to this open-air museum is Pueblo Chico park housing miniatures of the most interesting attractions of the Canary Islands.

In the section below, you can get one of our excursion, activities or city discovery tours over Tenerife and surroundings. Our website offers 10-30% lower ticket prices, when compared to the offline purchase on the spot.

This guide to cultural sights Tenerife is protected by the copyright law. You can re-publish this content with mandatory attribution: direct and active hyperlink to www.orangesmile.com.
Tenerife - guide chapters 1 2 3 4 5 6 7 8

What to visit during two-day excursion in Tenerife

Unique spots in Tenerife and near 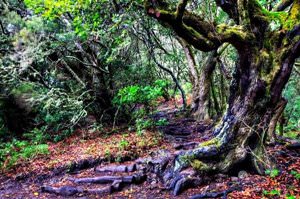 Distance from Tenerife center - 68.6 km.
Travelers who enjoy natural attractions would like to visit the Garajonay National Park in Spain. It is located on La Gomera Island, which is part of the Canary Islands. The park has the same name with the rock that is the highest point of the island. The area of ​​the national park is 40 square km. The significant part of the territory is covered by a laurel subtropical forest. … Read further

Photogallery of cultural heritage of Tenerife

Excursions over cultural sights of neighbours of Tenerife

Canary Islands
The island of Gran Canaria is also rich in tourist attractions. The unique cultural center Cueva Pintada is situated there. It can be found in the cave of the same name, where many drawings of the primitive people have remained. Currently, this large-scale archaeological complex consists of six caves and an interesting museum housing a collection of unique items. The tiny ... Open »
Puerto de la Cruz
Puerto-de-la-Cruz is the oldest resort in Tenerife, it strikingly differs from neighboring beach resorts. The primary number of habitants live exactly here, also there are a lot of important historical objects. The city’s symbol is excellent Charko square, whose main decoration is statue of God’s Mother. All the national celebrations and important events are organized at ... Open »
Adeje
Siam Park remains the main tourist attraction of the city. This is also the largest water park in Europe. The park occupies the territory of about 185 thousand square meters. In addition to numerous attractions visitors will find there beautiful botanical gardens, artificial waterfalls and beaches, as well as aviaries in which live seals. Art lovers will be interested in ... Open »
Los Gigantes
A special attraction is a leisure park called Lago Martianez, which was formed in the 70s of the last century. It is located in the northern part of the island, which is considered the most uncomfortable for beach holidays. Local residents decided to compensate for the lack of attractive beaches through a beautiful park with huge pools and artificial ponds. It features a lot ... Open »
Playa de las Americas
Playa de Las Americas doesn’t differ by plenty of historical and architectural objects, but at the same time it is impossible to call resort’s trip program boring. The famous cultural object is Piramide de Arona, it is big pyramidal concert ground, which is the permanent place for different cultural events. There are inflammatory Flamenco shows, classic musical concerts and ... Open »
La Gomera
Ancient religious buildings have also preserved on the island. The excursion program should definitely include a visit to the Church of Nuestra Senora de la Asuncion. It was built in the late 15th century. Now it is a fine example of medieval architecture. The main natural attraction of the island is the Garajonay National Park. This amazingly beautiful nature reserve attracts ... Open »

Culture guide to Tenerife. Which fascinating sights to visit once you are in Tenerife: temples, churches, museums, theaters and castles. Recommendations (with addresses, phone numbers and links) on the places 'must visit' in Tenerife. Plan your own city excursion by using this page info!