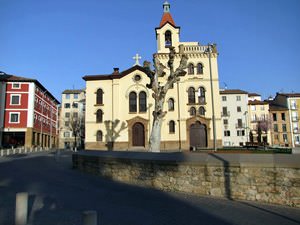 Pamplona is one of the oldest cities of the country which persistently stuns its guests with a variety of architectural and historical landmarks and sights. The most interesting destination for tourists in the city is its historical center as it accumulates a major part of sights and landmarks. The main symbol of Pamplona is the Cathedral which was established in 1390. The construction of the majestic religious building being a stunning sample of Gothic style lasted till 1527. The building impresses the visitors with its ingenious architectural style and scale.
Authentic traditions, festivals and lifestyle of Pamplona inhabitants
Travelers planning a visit to Pamplona in the middle of July will have a chance to witness a holiday of ultimate beauty being the San Fermines festival. Each year the festival starts on …

Open
The religious object keeps numerous inestimable artifacts. The right tower of the Cathedral is crowned with a huge bell being the largest one in Spain. The weight of the bell is 12 tons. It was casted in the end of the 16th century. The huge bell has been ringing in the city for more than four centuries. During an observation tour travelers will have a chance to look into the cathedral to fully enjoy its inner decoration which features refinement of forms and unique luxury.
The same interesting historical landmark is the Royal Palace built in the middle of the 19th century. A walk through its winding halls and estimation of its interior design will be of great interest for every tourist. Not far from the Palace tourists will find a building of the Archives of Navarra which was established as far back as in the 17th century. It keeps numerous ancient documents, maps and other historical artifacts telling the visitors of significant events in the history of the city. Copyright www.orangesmile.com
Advices to travellers: what you should know while being in Pamplona
1. The main type of city transport is a bus. The city is crossed with more than twenty routes. There are about a dozen of night routes of buses cruising the streets of the city from 23:00 …

Open
A perfect place for promenades will be a scenic square named the Plaza del Castillo. In the nearest neighborhood of the square travelers will find several significant spots of tourist attraction among which the Navarra Palace deserves particular attention. This majestic sample of baroque style is free to visit. The throne room is considered to be the most beautiful one among numerous halls of the palace. The main decoration of the room is a huge portrait of the King of Spain Ferdinand VII which was created by famous artist Goya. 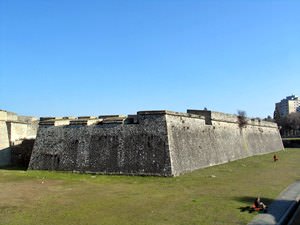 The last scale reconstruction of the Palace was held in the beginning of the 20th century. In 1903 an opening of the monument commemorating the queen was held. In close vicinity to the palace tourists will find the most significant religious landmark being the San Saturnino Church. The church was erected in the early Middle Ages period and named after San Saturnino. According to one of the legends he baptized more than forty thousands of pagans. The baptismal service was held exactly on the place where the church is located.

In the section below, you can get one of our excursion, activities or city discovery tours over Pamplona and surroundings. Our website offers 10-30% lower ticket prices, when compared to the offline purchase on the spot.

City tours, excursions and tickets in Pamplona and surroundings

This guide to cultural sights Pamplona is protected by the copyright law. You can re-publish this content with mandatory attribution: direct and active hyperlink to www.orangesmile.com.
Pamplona - guide chapters 1 2 3 4 5 6
Reference information
Map of all palaces

Public palaces near Pamplona
♥   Palace 'Olite Real Palace' , 37.3 km from the center. On the map

Cathedrals and basilicas near Pamplona
♥   Cathédrale Notre-Dame, Bayonne, 76.1 km from the center. On the map

In addition to exploring the heritage of Gaudi, many new cultural discoveries wait for tourists in Barcelona. The National Museum of Art of Catalonia is located in the luxurious National Palace. It has the richest collections of paintings, engravings, frescoes, and coins. The Pablo Picasso Museum is set in the ancient city palace; it has a unique collection donated by the artist's friend. The Spanish village set on 42 square kilometers, recreates the atmosphere of agrarian Spain. The Gothic quarter, located in the old part of the city, is a whole complex of buildings dating back to the 14th to the 15th century. Its main attraction is the Cathedral of the Holy Cross and Saint Eulalia of the 13th century, as well as the royal square, the Basilica of La Merce, and the Gothic church of Santa Maria del Pi. … Open

Photogallery of cultural heritage of Pamplona

Excursions over cultural sights of neighbours of Pamplona

San Sebastian
Pictorial art connoisseurs should necessarily visit the Museo Zuloaga. In the second part of the 19th century the villa was owed by a prominent painter Ignacio Zuloaga. Today the villa is transformed into a museum keeping a collection of works by the painter. It should be noted that the villa was constructed on ruins of an ancient monastery which was acting early in the 12th ... Open »
Biarritz
Historical Museum (Musee Historique) is known as one of the main attractions of Biarritz. The location of the museum is also very interesting – it occupies an ancient Anglican Cathedral. While enjoying the observation of the museum’s priceless collection, visitors will be able to learn the development of the city starting from the first days of its foundation until the ... Open »
Basque Country
When in Vitoria, don’t just pass by the Cathedral of Saint Mary. The construction of this magnificent building started in the 13th century, and its beauty is stunning. The Cathedral of Holy Mother of God is a contemporary place of worship, which construction had begun in the 20th century, and was completed only in 1973. The celebrating masses are held here, and once a year ... Open »
Bilbao
Bilbao offers its visitors to attend many interesting attractions. The city is home to various unique architectural monuments, unrivaled natural attractions, historical places of interest, and various cultural institutions. Nervión embankment is an interesting object of excursions. The embankment comes along the river that has the same name. The local landscapes never stop ... Open »
Lourdes
A very interesting place to visit is the Fortress of Lourdes. The large-scale historic building seems completely unharmonic at first glance. The reason for such a look is quite clear: the first fortification on the site of the current fortress was erected in the 8th century, and later it was repeatedly destroyed and rebuilt. Tourists will have the opportunity to climb to ... Open »
Zaragoza
Among the inestimable priceless artifacts of the Basilica its visitors will find the ingenious artworks of Goya and an ancient dossal icon dating back to the 16th century. The next must visit place for the engaging tours admirers in Zaragoza is the Museum of Jose Camon Aznar which is housed in a Renaissance palace. The collection of the museum comprises the artworks by the ... Open »

Culture guide to Pamplona. Which fascinating sights to visit once you are in Pamplona: temples, churches, museums, theaters and castles. Recommendations (with addresses, phone numbers and links) on the places 'must visit' in Pamplona. Plan your own city excursion by using this page info!