Detailed hi-res maps of Salou for download or print 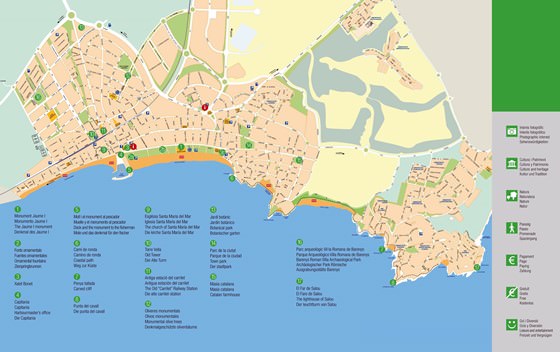 Search for services, infrastructure and sights on map of Salou

Our guide chapters over Salou

In Spain, to the south of Barcelona and near the ancient town named Tarragona is located the capital of Costa Daurada - Salou. The city is conveniently situated in a wonderful climatic zone and is famous for its excellent beaches. Located in a cozy bay stretching along the coast, Salou is adjacent to an ancient fishing village Cambrils on the south and to La Pineda Cape on the north. Salou coast is simply covered … Open

The Olivers restaurant will be a perfect place for those guests who can not imagine any meal without fried potato or potato crisps and pizza. The menu of the eating house offers its guests a wide choice of excellent fresh salads and fruit desserts. Visitors will discover the vastest assortment of refreshing drinks on the menu of the eating house. The New Little Hampton restaurant is specializing in international … Open

Traditions and mentality of Salou

Salou is a wonderful city with a rich cultural life. All the year round the city witnesses dozens of bright country fests and holidays succeeding each other and attracting thousands of tourists from all over the world. One of the most exciting events in the life of the city is still the Motor Star Festival. As it comes clear from the name of the event, the festival is dedicated to automobiles and driving. The main … Open

The coming Friday or Saturday is a good time to take a stroll along the boulevard Jaime. There is an incredibly beautiful dancing fountain at its end. Twice a week, when the night rolls around, you can watch an incredible water-music show. It starts exactly at 9 p.m. and attracts a huge number of tourists and locals. In summer, the dancing fountain works every evening. The Old Tower is an interesting historical … Open