Detailed hi-res maps of Morzine-Avoriaz for download or print 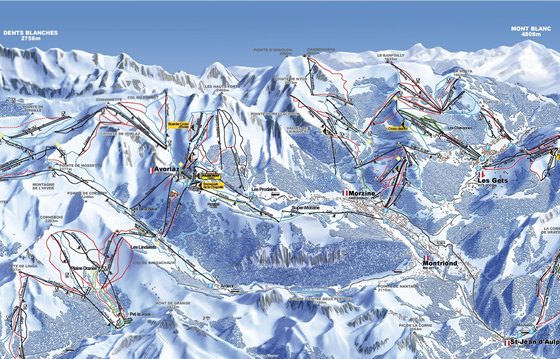 The actual dimensions of the Morzine-Avoriaz map are 2965 X 1901 pixels, file size (in bytes) - 1735579. You can open this downloadable and printable map of Morzine-Avoriaz by clicking on the map itself or via this link: Open the map.

City tours, excursions and tickets in Morzine-Avoriaz and surroundings

Search for services, infrastructure and sights on map of Morzine-Avoriaz

Our guide chapters over Morzine-Avoriaz

The plateau where Morzine-Avoriaz is currently located was empty until the mid-20th century. Local shepherds used it as a pasture for their livestock. Once, Jean Vuarnet, a famous alpine ski racer and Olympic champion, arrived here to polish his skiing skills. Vuarnet was so charmed by the local nature and striking views that he decided to open an alpine ski resort here. The project was really interesting – the … Open

Maps of Montreux
One of the family holidays is Christmas. Traditionally, it is celebrated over the festive table in the family circle. During the Christmas period, no fiery shows or other entertainments are held outside. The locals celebrate this holiday at home. Tourists should visit the city a few weeks before Christmas when they can visit traditional fairs. At this time, the citizens ... Open »
Maps of Chamonix
During Christmas holidays, families would have a great time, as rich and interesting entertainment programs are usually arranged there. Summer in Chamonix is associated with Cosmo Jazz music festival; it usually starts in the second half of July and lasts for five days. Jazz Festival is a young festival; it was first held in 2010. Large outdoor stages with numerous viewing ... Open »
Maps of Lausanne
Music lovers would be happy to check out another nice music festival that is held in early April. We are talking about the Cully Jazz Festival aimed at introducing visitors to music that has already become classics, as well as its related genres such as funk, blues, soul, rock. The 9-day event takes place in cultural centers, concert halls, theaters, opera houses, bars, and ... Open »
Maps of Geneva
In May, during the days of wine festivals on Lake Geneva, local winemakers open the cellars and invite guests to join such a brilliant atmosphere. These merry days are a great opportunity not only to taste good wines but also to buy your favorites, as well as to join the local traditions and cuisine of the region. In December and January, Trees and the Light festival is taking ... Open »
Maps of Crans-Montana
One of the most interesting events in the resort’s calendar is the annual Hot-Air Balloon Festival. Enthusiasts from many European countries take part in it. On these festive days, one can admire dozens and dozens of incredibly beautiful balloons rising into the sky. Guests of the event are offered interesting entertainment - they can fly a balloon accompanied by ... Open »
OrangeSmile.com - online travel reservation expert providing reliable car rental and hotel booking services. We feature more than 25.000 destinations with 12.000 rental offices and 200.000 hotels worldwide.
Secure Server