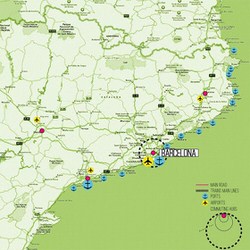 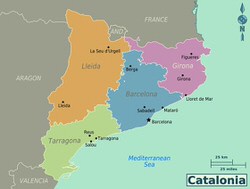 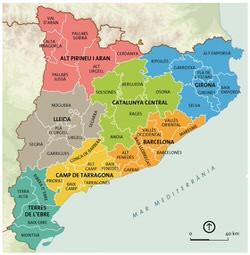 Interactive maps of hiking and biking routes around Catalonia

1. You can zoom in/out using your mouse wheel, as well as move the map of Catalonia with your mouse.
2. This interactive map presents two modes: 'Biking Routes' and 'Hiking Routes'. Use the '+' button on the map to switch between them.

This Catalonia map has two modes: 'Railway Network' and 'Landscape & Rural Map'. Use the '+' button on the map to navigate.

City tours, excursions and tickets in Catalonia and surroundings

Our guide to Catalonia

In addition to unique religious sites, Barcelona has a vast amount of museums and cultural centers. Girona is also famous due to an abundance of famous attractions. It was built on the site of the ancient city of Gerunda that has been destroyed. Modern tourists associate Girona with Salvador Dali. The art museum dedicated to its works is located in the immediate vicinity of Girona, in the ancient town of Figueres. … Open

The famous five-star hotel Dolce can be found in Sitges; this place is sure to appeal to fans of exotic locations. Decorated in the utmost modern style, it was literally created for active recreation. There are popular golf resorts near it; its territory has a decent selection of leisure pools and playgrounds. There is also a first class wellness center, where you can relax after a busy day of entertainment. In a … Open

The majestic Noguera Pallaresa River attracts fans of extreme sports. Everyone can enjoy canoeing or kayaking there and an abundance of emotions is guaranteed. Foothill areas of the Pyrenees are ideal not only for walking, but also for cycling. Those who wish to enjoy the typical urban entertainment have to spend a few days in Girona or Barcelona featuring an abundance of shops and entertainment venues. These … Open

Catalunya is famous for its delicious meat and delicacies; excellent sausages and bacon are made there. You can buy a lot of interesting types of cheese at local markets. Those wishing to explore culinary traditions of the region don’t have to limit themselves by restaurants only; be sure to pop into farm markets, where they sell a lot of interesting treats. Hearty meat dishes of Pyrenees, gourmet seafood of … Open

Traditions and mentality of Catalonia

Indigenous people are fond of parties, so they willingly celebrate national festivals and modern Spanish holidays. Each city is sure to celebrate Festa Major dedicated to its patron saint. Typically, mass festivities last for several days; the celebration is full of exciting entertainment and symbolic events. Cities arrange fun events, musical performances and large-scale fairs and mount an incredible amount of … Open

The picturesque Pyrenees are rich with excellent ski resorts. There are a few difficult routes for professional sportsmen but there are also a lot of comfortable places for family recreation. One of the most attractive family resorts is La Molina. In a warm period, you can hike and ride a bike in the submontane area. There are also very interesting districts for mountaineering. The popular kind of sport in … Open