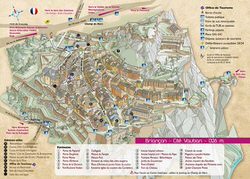 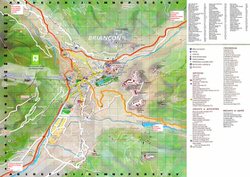 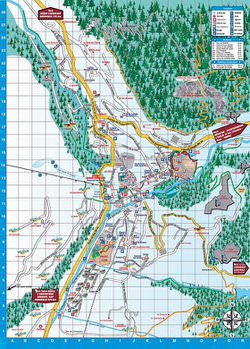 Interactive maps of hiking and biking routes around Briancon

1. You can zoom in/out using your mouse wheel, as well as move the map of Briancon with your mouse.
2. This interactive map presents two modes: 'Biking Routes' and 'Hiking Routes'. Use the '+' button on the map to switch between them.

This Briancon map has two modes: 'Railway Network' and 'Landscape & Rural Map'. Use the '+' button on the map to navigate.

Our guide to Briancon

Traditions and mentality of Briancon

Communication with local people should also be made as laconic as possible. By no means should foreigners start with discussing serious questions and talk straight about the main theme. Start with something neutral and enjoy “small talks”. Business travelers should particularly not forget about this simple rule. When discussing something with local people, it is virtually impossible to prove that your opinion … Open

The most fascinating affair is a long walk though the town. This way one can see various monuments and unique historical buildings all over the place. Walking lovers should consider the fact that the streets in Briancon are really steep and the long walk can be very difficult. Modern Briancon is famous not only due to first-rate alpine skiing tracks, but for great sanatoria. Many tourists choose them for their … Open

The most beautiful historical street of Briançon accommodates Hotel Auberge de la Paix, which is designed in a sophisticated and romantic style. Each and every element of its rooms' interior is thought out to the smallest detail; they are furnished with chic beds decorated with high carved headboards, unusual chandeliers with many pendants and vintage lamps, beautiful paintings, and designer accessories in a … Open

Hotels with history of Briancon

Travelers who would rather prefer staying in comfortable apartments will have a chance to use the exclusive services of Appart Hotel: Résidence du Temple. Located in the heart of the Old Town, it occupies an ancient stone building, which has preserved its historical decoration during the reconstruction as much as possible. Wooden beams are partially preserved as well, and in the top-floor rooms, you can notice … Open

Modest Hotel Cristol is deservedly popular among couples, as here they can choose a double room for every taste. Guests will be able to book a room in sunny shades equipped with a huge panoramic window and a great furnished balcony. Minimalist-style rooms are of particular interest. Their floors and walls are finished in light wood, the spacious rooms have large beds dressed with elegant black linens. Couples of … Open

When it comes to food regime, there are some peculiarities that foreign tourists should not forget about. They shouldn’t expect to find a variety of food for breakfast. As a rule, locals order fresh buns and croissants together with coffee – breakfasts are really light here. However, lunches start quite early, already in the noon. A typical lunch consists of three dishes. A light soup or broth is a typical … Open