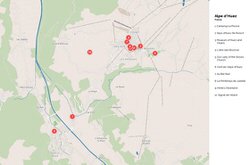 1. You can zoom in/out using your mouse wheel, as well as move the map of Alpe d Huez with your mouse.
2. This interactive map presents two modes: 'Biking Routes' and 'Hiking Routes'. Use the '+' button on the map to switch between them.

This Alpe d Huez map has two modes: 'Railway Network' and 'Landscape & Rural Map'. Use the '+' button on the map to navigate.

Our guide to Alpe d Huez

In the vicinity of the resort, you will find several interesting nature reserves. In summer, vacationers can visit Maison du Parc National des Ecrins. This nature reserve was established in 1973. Maison du Parc National des Ecrins is one of the largest reserves in France – it has an area of approximately 925 square kilometers. This is truly a place of incredible beauty. Majestic mountain lakes with water of … Open

Budget tourists wishing to buy edible souvenirs often visit Carrefour Montagne Alpe d'Huez for this purpose. This supermarket sells many quality products and often has promotions with nice discounts on local delicatessen. In addition to vegetables and fruits, Carrefour Montagne Alpe d'Huez has a large department with meat and dairy products. If you need new clothes for all family members, Quiksilver Les Bergers … Open

Musee des Mineraux Et de la Faune des Alpes can easily win the title of the most interesting museum in the region. You will find it in the suburban neighborhood of Le Bourg-d'Oisans. It takes approximately 15 minutes by car to get to the museum. Visit it to see an interesting collection of minerals. All of the stones exhibited in the museum can be found in the region. Speleologists discovered deposits of some very … Open

Tourists from all over the world find it interesting to visit Alpe d'Huez that is a unique place. This ski resort has an undisputable advantage – it is impossible to find another mountain resort that has so many ski trails in such a small territory. The village near this mountain sports gem has a triangular shape. It is a part of the Grandes Rousses massif. The ski resort of Alpe d'Huez greeted its first guests … Open

Maps of Grenoble
Admiring mountain lakes is another great pastime available in the vicinity of Grenoble. The most picturesque lakes are Robert Lakes (near Station de Chamrousse) and Saint-Imier surrounding the River Isere from all sides. By the way, this river is a great place to have a good time enjoying wonderful views of the water surface. It's a pleasure to sit by the ponds of Pacific or ... Open »
Maps of Rhone-Alpes
The region has two large thermal spas, Evian-les-Bains and Aix-les-Bains. Based near healing hot springs, they can offer their guests not only a wide range of wellness services, but also everything necessary for outdoor activities. There are also swimming pools and sports centers, prestigious restaurants and entertainment venues. The Rhone-Alpes province features two ... Open »
Maps of Meribel
Guests of Meribel can also enjoy typical forms of entertainment. The resort has a lot of interesting shops of various specializations. In many professional sports shop, you can buy all the necessary equipment for skiing and mountaineering. In search of interesting souvenirs, many travelers go to gastronomic shops, which are famous for a rich selection of local delicacies and ... Open »
Maps of Courchevel
In Patinoire Olympique, visitors can go ice skating or watch figure skating competitions. This is the reason one should look for announcements of upcoming events in the complex. Those who prefer to watch movies rather than sports matches should be recommended to go to Cinema Megarama Le Tremplin, where there is always a great choice of novelties and a cinema hall with a ... Open »
Maps of Albertville
Those who enjoy active tourism will definitely find entertainments to one's liking. In the Pays d'Albertville touristic mansion you will be able to enjoy all kind of watersports including water skiing and wakeboarding, fishing and swimming in the blue-water pools. Fans of tennis can upgrade their skills at the local courts - Tennis Olympique Albertville. Here you will find ... Open »
Maps of Val d Isere
Those who want to see beautiful wildflowers - another pride of the Alps - should in no way ignore Sentier Botanique. And along the way, you can see a mountain waterfall and "get stuck" in this place for a long time, whereas most of you would like to stay here forever. The most popular sport in the ski paradise (besides the winter types of entertainment) is tennis, so its fans ... Open »
OrangeSmile.com - online travel reservation expert providing reliable car rental and hotel booking services. We feature more than 25.000 destinations with 12.000 rental offices and 200.000 hotels worldwide.
Secure Server