Detailed hi-res maps of Brac Island for download or print

The actual dimensions of the Brac Island map are 2952 X 1104 pixels, file size (in bytes) - 864272. You can open this downloadable and printable map of Brac Island by clicking on the map itself or via this link: Open the map. 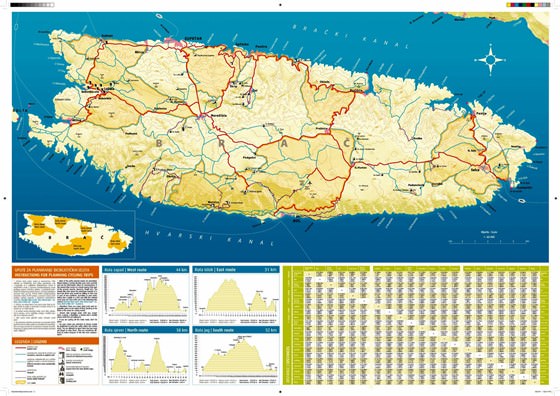 Search for services, infrastructure and sights on map of Brac Island

Our guide chapters over Brac Island

Brac Island for children - what to visit

A curious child will surely like the idea of visiting a quarry near Pucisca. It produces "Brac limestone", a stone of absolutely white color, which was used to decorate many famous buildings, for example, the White House in Washington. Climb with the child on the Vidova Gora. The height is small and will be easy even for a baby, and the magnificent view that opens from the top is simply unforgettable. Young … Open

Among the edible souvenirs Prsut is without any doubt on the first place. Pork ham, first smoked in coals, and then dried under the sun is unusually delicious and is sold already in gift wrapping as well. Pay attention to local sausages – Zagorian or Samoborian. Marinated or dried truffles are sold here, and if you want, you can also find truffle pasta. It is worth paying attention to the local cheese and olive … Open

Brac is famous for its picturesque beaches. There are both pebble and sand beaches in the region. In the southern part of the island, visitors will find a very unusual beach - Zlatni Rat. It is located on the cape that has the same name. The beach has become a popular local landmark because it changes its shape every day because of waves and wind. The length of the cape is approximately 300 meters, and this territory … Open

Traditions and mentality of Brac Island

The Croatians surprisingly combined the features of the Slavs, Romans, Turks, and many others, for centuries being close to completely different neighbors in terms of culture and perception of the world. Remember that there is no hurry here. In general, the main words that characterize local residents sound like polako – slowly, without rushing; sutra – tomorrow; nema problema – no problem. Here, in Brac, there … Open

If you want to drink coffee in the morning, then you need to look for cafes or cafeterias. They usually open around six in the morning. If you do not specify which coffee you want, then by default they will bring you a black espresso. In kava sa mljekom there will be milk, in kava sa šlagom – cream, and in bjela kava – whipped cream. Usually coffee is served with a glass of water. Tea is also popular, most … Open

It is worth taking a little time to explore the island on foot. You can go for a day to wander among the forests, fields, and olive groves yourself, and you can go on any of the tourist routes along with other travelers. The most popular routes usually pass from Murvitsa to the Dragon Cave, from Nerezica to the Blaca Desert and from the town of Bol to Vidova Mountain. Vidova Mountain is worth a visit, even if you … Open