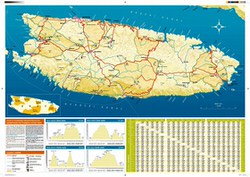 Interactive maps of hiking and biking routes around Brac Island

1. You can zoom in/out using your mouse wheel, as well as move the map of Brac Island with your mouse.
2. This interactive map presents two modes: 'Biking Routes' and 'Hiking Routes'. Use the '+' button on the map to switch between them.

This Brac Island map has two modes: 'Railway Network' and 'Landscape & Rural Map'. Use the '+' button on the map to navigate.

Our guide to Brac Island

The southern part of the island can boast one of the most mysterious monuments of Brac, Dragon Cave. There is no doubt that it’s man-made, but the real purpose of the cave is one of the mysteries of the island. Its inner walls are decorated with pictures and symbols unknown to science, and contemporaries can only guess what their meaning was. A path to the cave lies in an incredibly beautiful place, so fans of … Open

The Brac island was inhabited in Antiquity. You can find a confirmation of this when going to the Skrip village. Here you can see not only agricultural buildings of different centuries and the church of St. Dir, built over two hundred years ago, but also ancient Roman bas-reliefs and tombstones, as well as an abandoned quarry where the Romans mined stones for the construction of the palace in Split. However, Srip is … Open

The popular Ivan hotel will appeal to both history buffs and fans of spa treatments. It’s a real local landmark; its mansion was built in 1656. It’s noteworthy that its walls have being housing the hotel from the outset, so this accommodation place is one of the oldest on the island. Today, the building is completely renovated; in addition to comfortable rooms and suites, this historic hotel is ready to … Open

Every year a large number of divers from different countries come to Brac. The popularity of the island among the divers is easy to explain: there are sets for experienced underwater swimmers and for the beginners, the price of equipment rental is not too high and there is a large number of various diving centers. The underwater world of the water area of ​​the island is very rich, here you can see more than … Open

In general, the courses that you can taste in Brac are not much different from those in continental Croatia. The only thing: the variety of fish courses here is much bigger, and you can vouch for the freshness of seafood, especially in coastal restaurants. The choice of dishes at a restaurant, “restauracija” in Croatian, and in a konoba, the local analog of the tavern, usually furnished in the countryside style, … Open

Traditions and mentality of Brac Island

The locals are not too punctual. Women here are quite active and often openly act as leaders in their family. Men have a sense of humor and like to give compliments to any woman at least a bit attractive but they usually do not go past flirting. The Croats are very proud of their independence and cannot stand to be called "the Yugoslavs". In Brac, as in the central part of the country, many national customs have … Open