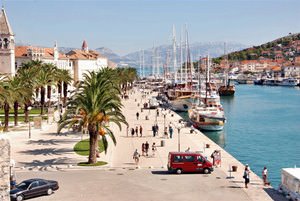 Croatia in Yugoslavia was a fairly developed territorial unit. All Enterprises and Factories that functioned on its territory had the right to choose their own business policy; they worked with investments and investors, and independently built competitive relations. Therefore, after the war, Croatia was able to restore the downswing of economy as fast as possible in 1993. Since early 1993, the country was admitted to the International Monetary Fund. Due to the fact that Croatia as a whole was involved in the war with Bosnia, this in many respects complicated the economic relations of the Republic with the World Bank, such that the Government could not count on its assistance. The fact that the Country began to privatize its production helped a little to speed up the process of improving the economy, thereby financing her budget through taxation.
The soul of Croatia - religions and languages
Croatia mostly professes Christianity like most modern European Countries. However, historically there was some confrontation between Orthodox and …
Read further
It is worth noting that there are very few oil and gas deposits in the Republic, causing it to become completely dependent on importation. The Country has eleven water power plants, and eight thermal power plants. The Republic of Croatia had high hopes for joining NATO. For this purpose, more than 10 years was spent on carefully reforming the country’s Armed Forces to enable her comply with all the norms of NATO. The entry into the North Atlantic Alliance was to become a huge help for the rapid development of the Economy. New investors from developed Countries were to come to the Country. After joining NATO in 2009, the economy really started to develop rapidly in Croatia, causing the quantity of the exported goods to increase significantly. To date, direct Foreign Investment of the Republic is about 19 billion Euros.
In Croatia, the main profitable branch of the economy is the Service Sector. Its contribution to the annual GDP of the Republic is at least 70%. This is much higher than in fellow European countries such as Poland, Romania and Latvia. The Purchasing Power is about 18 thousand dollars. The Country’s GDP per capita is $ 21,645. This has improved the country’s ranking to the 50th position in the world rating. GDP at the official exchange rate is in the range of $ 63 billion. The growth rate indicator is increasing every year. In 2010, the biggest jump in GDP was registered by almost 6%. However, due to the global economic crisis in recent years, these indicators have slightly decreased. Copyright www.orangesmile.com
Unique sights of Croatia from our series 'Extreme places on Earth'
These spots really worth the attention of a real traveler-researcher. …
Read further
The working capacity of Croatia is about 1,300 million people. About 70% of this number is employed in the Service Sector. The next place is occupied by industry, and only 5% of the labor force is in Agriculture. The unemployment rate for 2012 is at 14%. The national debt of the Country in the same period is 61%. There is a gradual decrease in the level of inflation. In 2009, the indicators were at 6.3%, and the following year it reduced to 2.4%. To date, more than 65% of agricultural land is cultivated in the country. The rest of the territory is given to pastures. Among the most famous Croatian products are the “Slavonian salami”, “Dalmatian smoked ham”, smoked ham which is produced on the peninsula of Istria and Cheese from the Island of Pag under the brand “paški sir”. The greater importance in agriculture is the breeding of Fish and Shellfish. To date, there are 19 Seafood Processing Factories in the Country. At the same time, the production of food, beverages and tobacco products accounts for about 22% of the Gross Domestic Product (GDP). 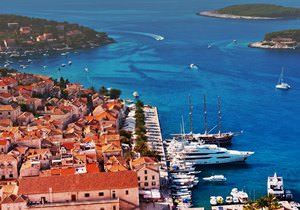 Privatization, increasing the number of export products, establishing new trade relations, automating the process and setting new standards is the key to the annual development of the industrial sector in Croatia. It is the Industrial Products that make up about 95% of the total number of Exported Goods. The main directions in the Republic as in the past are Mechanical Engineering and High-Quality Shipbuilding, Chemical, Textile and Woodworking Industries. Also widely used were the Electrical, Pharmaceutical and Oil refining Industry. It should be noted that in Croatia, large-scale work is underway to extract Bauxite, Brown Coal and Copper. The most famous Companies with a world-wide brand name were “Ericsson Nikola Tesla” and “Koncar”, the Pharmaceutical Enterprise “Pliva”, Furniture Factories “Tvin” and “Podravka”, and “Kras”, which belong to the food industry.
Croatia sightseeing - top places to visit
Beautiful nature, hundreds of small islands, dense forests and ancient castles – Croatia is a wonderful country perfect for vacation. The capital of …
Read further
Croatia is characterized by its developed and high-quality transport system. Her road coverage is recognized as one of the best in Europe. Railway networks are also actively developing. Currently, the priority direction in the Country is the expansion of transportation links to improve Regional and International ties. The Croatian Kuna is considered the official currency in Croatia. Since 1995, it shows a fairly stable exchange rate against the Dollar. The regulations for 2011 in the country recorded 45 commercial banks of which 8 are foreign. However, analysts say that the banking sector in Croatia is too oversaturated by Credit Institutions.

Dubrovnik
Some shops in Dubrovnik have long acquired the status of outstanding attractions. The Ronchi hat factory is among them. It was established in 1858. As years before, all headdress are hand-made only nowadays. Many tourists attend the workshop like a museum to watch the work of masters and appreciate the range of hats presented here. If no suitable hat is found, you can always order one under your individual sketch. In Dubrovnik, among other things, you can purchase exclusive jewelry. The most … Read more

Zadar
Ladies who prefer to dress in the most exquisite and upscale stores, will be interested in visiting M&W shopping pavilion. It is located a short distance from the busy shopping streets of the city. The store presents clothes for every season. The price level here is really much higher than in many other Zadar shops, but this is fully compensated by the high quality of the goods. For memorable souvenirs, many guests of the city go to Hand Made store. They sell classic souvenirs, such as … Read more

Zagreb
Near the city cathedral is located Sirok, the city's largest souvenir shop. It presents the best choice of gifts for miles around. Everything from classic magnets and T-shirts to the original figurines of knights and incredibly beautiful painted plates is sold in it. The level of prices is one and a half times higher than in other souvenir shops, on average. However, the store is much appreciated for the variety of souvenirs. The nearby Dolac market can be of interest to budget travelers. The … Read more

Opatija
The mall is located near several streets where you can find many more attractive shops. All ladies should pay attention to pavilions selling underwear and swimwear of Slovenian and Italian production. In Trg Marsala Tita Street, you can find the main city market, which would be of interest to all shopping enthusiasts. This is a covered market with trading pavilions located on two floors. On the ground floor, visitors can buy fresh vegetables and fruits, seafood and olive oil, as well as … Read more

Makarska
One of the best women's clothing stores in the city is Laura, it is possible to buy very beautiful things and accessories for different seasons for a reasonable price. At the end of each season, the store has sales, where prices can be reduced more than twice. During this sale, chic summer dresses can be purchased for only 200 Kuna, and colourful summer shawls will cost customers about 10 Kuna. The store will appeal to modern fashionistas, it always sells a lot of interesting accessories in … Read more

Osijek
Shopping trips can be diversified by exploring the local market in the city's main square. On its counters, you can buy the most popular regional products, as well as non-food goods at much lower cost than in malls. At the market, many tourists prefer to buy traditional lace tablecloths and handicrafts as souvenirs. Besides, several pavilions specialize in antiques here. Nearby is an original gift shop - Rukotvorine offering exclusive handmade souvenirs. For unusual memorable gifts, you can … Read more

Brac Island
As a practical souvenir you can buy a small bag of lavender. Lavender calms, gives a strong sleep and serves as an excellent natural freshener for laundry. You can also buy lavender oil. There is also a great choice of shells and crafts made of them, and figured candles. The original souvenir will be local lace and Vucedol dove, which is a copy of a cult vessel on three legs. Please note that the pigeon is very fragile. An interesting gift will be the jewelry from the Morcic factory. … Read more

Hvar Island
Another truly Croatian souvenir is the Vuchedol pigeon. This is an unusual form of a cult vessel, associated with a large number of local rituals and traditions, many of which have already become history. A miniature copy of the Istarski kažun also refers to the past. Kazun was called a shed, built right in the field, where the farmers kept inventory and waited until the rain would stop. A product from white limestone from the neighboring Brac island can also become a good souvenir. The … Read more