Detailed hi-res maps of Split for download or print 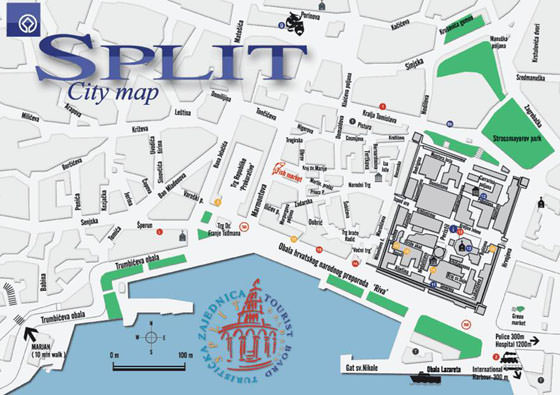 The actual dimensions of the Split map are 882 X 622 pixels, file size (in bytes) - 96209. You can open this downloadable and printable map of Split by clicking on the map itself or via this link: Open the map. Search for services, infrastructure and sights on map of Split

Our guide chapters over Split

Guests of Split won’t experience any shortage of things to do; tours to historical monuments can be successfully combined with walks around the shops, scenic parks and entertainment centers. In warmer months, vacationers can enjoy picturesque beaches. The most beautiful and lively beach is Brela. Surprisingly quiet and clean, it is perfect for families with children. This site is surrounded by beautiful green … Open

Split will certainly appeal to those who can’t relax without a visit to the cozy restaurant or cafe. Local conobas - small restaurants with a homelike atmosphere and extremely pleasant prices – are very popular among foreigners. Local dining places will offer visitors a wide selection of treats, including juicy steaks and vegetable side dishes, classic fish and mussels, as well as freshly baked bread and … Open

The Cathedral of Saint Douilly is a very unusual monument of architecture. It has been erected on the ruins of ancient Roman buildings and represents a beautiful creation in a Byzantine style. It maintains many ancient design elements. Its altar was made during the 15th century. A part of the cathedral is occupied by an interesting historical museum nowadays. Among its exhibits are ancient breast crosses, military … Open

1. Those who want to visit the Marjan park are recommended to go for a walk early in the morning. The park is located in a mountainous area, so in the middle of the day it may be difficult to climb the mountain because of the hot sun. Don’t forget to take a bottle of water, because there are no shops and cafes in this area. 2. Besides souvenirs you can buy excellent city guides and booklets describing the … Open

Among other palace buildings the Peristyle is noteworthy; it is a monument of the Roman Empire. It is a large rectangular courtyard surrounded by tall pillars; the large-scale building was used for ceremonies. Nearby is the so-called Hall - a beautiful round hall with a dome, which was used as an entrance to apartments of the emperor. In the tiny historic town there is the Temple of Jupiter; in the Middle Ages it … Open

The Archaeological Museum of Split has the great interest for visitors. Its collection will be liked not only by history fans, because here are collected numerous amazing exhibits, the most notable of which is a collection of precious stones. Hikers simply can’t fail to visit Marjan Park. You will also see several old buildings here and enjoy the beautiful nature. Diocletian's Palace remains the main symbol … Open

Maps of Brac Island
To many it seems surprisingly strange but no less harmonious, the combination in the mentality of the inhabitants of the island a considerable degree of relaxation towards everything, together with courtesy, decency, and the ability to do their work. Remember that the Croats do not like to say "no" and "don’t". Therefore, having agreed on something with a local resident, ... Open »
Maps of Hvar
Tourists also prefer to bring lavender as a souvenir from the island; local craftsmen make a lot of interesting home decorations and talismans of it. Ladies will be delighted with an abundance of fine perfumes and cosmetics; as you might guess, all of them are made with addition of lavender. Summer remains the most preferred leisure time on the island; that’s because of ... Open »
Maps of Makarska
The small beach resort will please travellers with a variety of interesting holidays and festivals that are held here throughout the year. Most of the holidays dedicated to national culture and traditions are held in the summer, the largest is the festival Makarska Ljeto. The colourful summer festival is dedicated to a variety of areas of regional culture, it is attended by ... Open »
Maps of Vis Island
Most of the locals treat tourists with cold European courtesy. It is obvious because tourists bring a lot of money to the country. Locals provide high service to the foreigners, but they will never tolerate rudeness and go beyond the official duties. Local inhabitants don’t like when anybody enters their private territory. If you have accidentally come to someone’s ... Open »
Maps of Zadar
Glazbene Veceri sv. Donatu (or Music Evening of St. Donatus) is one more interesting festival in Zadar, thanks to which everyone can listen to gorgeous classic and modern music performed by orchestras from different parts of the world. The fabulous event lasts whole July and is usually held at Crkva sv. Donata. It is hard to think of a better location for the festival than a ... Open »
OrangeSmile.com - online travel reservation expert providing reliable car rental and hotel booking services. We feature more than 25.000 destinations with 12.000 rental offices and 200.000 hotels worldwide.
Secure Server