Detailed hi-res maps of Vis Island for download or print 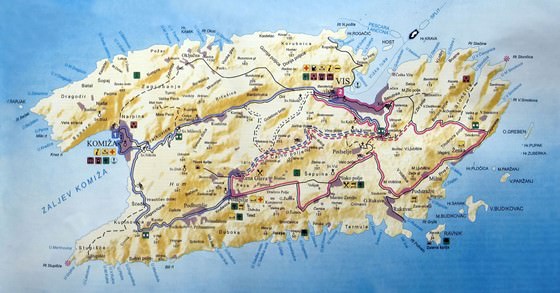 Search for services, infrastructure and sights on map of Vis Island

Our guide chapters over Vis Island

Handicrafts made of Brać stone are extremely popular on Vis. This stone is delivered to Vis from Brač Island. Brać handicrafts look nice and the facade of the White House is made of this stone. Superstitious local inhabitants believe that the stone protects from the evil eye and ward off evil spirits. You decide whether the stone has supernatural qualities or not but this souvenir looks nice and it can be a nice … Open

The seat of the pebble beach Grandovac is the picturesque bay of the same name; this stretch of coast appeals to fans of hideaway. The attractive Stiniva Beach that also gained recognition among the fans of relaxing pastime can be found to the west of the island. This stretch of coast is far from major cities and resort areas, so it has very calm and peaceful atmosphere. Travelers who go on a trip with kids should … Open

Vis Island for children - what to visit

Komiža is a relatively young city. However, your child won't be bored here. For example, you can take your child to the Community Centre. It is a well-preserved tower of the Renaissance era. The St. Nicholas Monastery was built in the 13th century. It was established by the Benedictines. You can reach all of the most places on the island from Komiža and go on a trip to the nearby parts of the archipelago. A child … Open

Vis is famous as a popular beach recreation destination. Some of the best beaches of the Adriatic coast are located exactly in this resort. Zaglav is one of the most famous and crowded beaches of the region, but despite that fact is has managed to retain its original natural beauty. Visitors of this beach will be charmed by its amazing nature, but that is not the only advantage as the beach has a well-developed … Open

Traditions and mentality of Vis Island

Most of the locals treat tourists with cold European courtesy. It is obvious because tourists bring a lot of money to the country. Locals provide high service to the foreigners, but they will never tolerate rudeness and go beyond the official duties. Local inhabitants don’t like when anybody enters their private territory. If you have accidentally come to someone’s private land, a nice and polite local … Open

Before going to a restaurant, remember that late dinner and supper are the most important meals in Croatia. Some of the local catering establishments serve dishes only after 2 p.m. However, you can visit a restaurant at noon and have marenda (a late breakfast) here. It is usually a portion of meat or a fish with a garnish. But the portion is smaller than you can order on dinner and it costs less. Pizza is a … Open