Sightseeing in Zadar - what to see. Complete travel guide 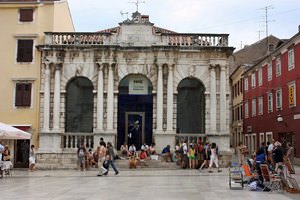 Zadar is a legendary impregnable fortress that was made by the Venetians over three hundred years ago to resist the invasion of the Turkish troops. Today well preserved fort walls, giant doors and protective towers remind of those events. The biggest part of Zadar is occupied by old streets and a historical district. Modern hotel complexes are located in the district named Borik. Here you will find most popular beaches, restaurants and entertainment centers.
Shopping in Zadar - main shopping streets, outlets and boutiques
City Galleria shopping center is the most popular shopping place in Zadar. It is located near the bus station. The shopping complex is focused on customers with varying levels of income. It …

Open
Besides traditional walks on shops, resting on the beach or sports entertainments, Zadar offers its visitors wide choice of excursions. The most large-scale architectural complex of the city is the ancient Roman Forum built in the 1st century AD. Nearby the forum you can see several ancient columns, the ruins of temples and Church of Saint Donatus that has been built later. The scared building was created in the 9th century and initially it was called the Church of Holy Trinity. It got its current name only in the 15th century. This church is considered the best sight of the Byzantine architecture.
Besides the mentioned sights there are 15 ancient churches in Zadar and each one of them is worth attention. We should definitely mention the Church of Saint Simeon, Church of Franciscan Monastery, and Saint Anastasia Cathedral located on the central street of the city. From the cultural point of view the most interesting religious building of Zadar is Saint Maria Monastery. The halls of this building are used to store the exhibition named “Gold and Silver of Zadar”. Here you will see the collections of interior items and jewelry made of precious metals. Nearby the fort walls are located two magnificent parks named to honor Queen Helen and Vladimir Nazor. This is a magnificent place for evening walks and here you will always find silence and cozy atmosphere. Copyright www.orangesmile.com
Family holidays with kids in Zadar. How to entertain your child, things to show to children.
Travelers with children who plan to spend a few days in Zadar will not be bored for sure. There are a lot of interesting entertainment centers and attractions here. With children of school …

Open
Nature lovers will be able to visit the charming Paklenica National Park. Its main value is the swift mountain rivers. Their shores have a series of beautiful rock formations. The height of some rocks is more than 700 meters. In the park, there are several beautiful caves which are also available for visiting. The National Park is very popular among lovers of hiking and mountaineering. In the warmer months, there camping sites on its territory, so travelers can stay in these picturesque places for a few days. 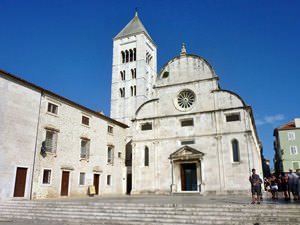 The most unusual city attraction can safely be said to be the “Sea organ”. It can be seen and heard from the waterfront. In 2005, a pipe system was built in the step of the embankment which, under the action of sea waves, produces very melodic and pleasant sounds. This place on the waterfront is popular with local people. Many of them come here in the evenings to relax and listen to the amazing sounds produced by the unique musical instrument.
Cuisine of Zadar for gourmet with top restaurants and cafe
Speaking of the best restaurants of Zadar, we simply cannot fail to mention Albin. It is located in the center of the city and is very popular among followers of a healthy diet. The …

Open
No less interesting attraction is the modern monument, which is called “Greeting to the Sun”. It is a complex of 300 solar modules, which intensively accumulates solar energy in the daytime. The modules are distributed on the ground in the shape of a 22-meter diameter circle. With the onset of evening, the glass plates begin to glow. This unusual LED panel reproduces a variety of light compositions. In the evening, you can observe the parade of the planets, as well as the formation of various calendars and other cognitive light illustrations. This unusual monument is located on the waterfront of Zadar, which remains the most popular place for evening walks. 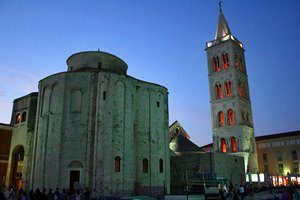 Speaking of the outstanding sights of the city, it is worth mentioning the beautiful Ninska Laguna beach. It is often called “royal beach” by the locals, all thanks to the crystal clear water and attractive surrounding landscapes. On the territory of this beach, there are several springs of healing mud, so it is very popular among adherents of health recreation. At the height of the tourist season, there is always an auto camping on this stretch of the coast. Tourists are offered a lot of interesting entertainments.

This guide to iconic landmarks and sights of Zadar is protected by the copyright law. You can re-publish this content with mandatory attribution: direct and active hyperlink to www.orangesmile.com.
Zadar - guide chapters 1 2 3 4 5 6 7 8 9

Survived castles around Zadar
♥   Castle 'Vrana Castle' , 32.2 km from the center. On the map

National and city parks around Zadar
♥   Nature Park 'Telašćica' , 26.4 km from the center. On the map

Search touristic sites on the map of Zadar

Sightseeing in regions nearby Zadar

Dugi Otok
In the city of Sali, there is one of the most significant religious attractions of the island - the Cathedral of the Assumption of the Virgin Mary. The first church in its place was built in the 9th century, and the construction of the temple, which can be seen today, began in 1465. Church of St. Pelegrin, located in the city of Savares, is the oldest building on the island. ... Open »
Murter
You must certainly come to the capital of the island - the city of Murter. There are ruins of ancient settlements also there. Speaking of Murter's interesting natural attractions, we should mention Raduch Mountain, which the highest point of the flat island. The height of the mountain is only 120 meters, so the ascent to its top promises to be easy and incredibly interesting. ... Open »
Pag Island
However, priceless landmarks of the island are well worth visiting in every season. Capital of Pag is the town of the same name. There are lots of medieval landmarks survived there until these days. The most interesting of them are bishop's and prince's palaces. Both palaces are built by famous architect Jurai Dalmatinac; they are recognized as unique architectural landmarks. ... Open »
Losinj Island
The most famous and symbolic sculpture of the island is Apoksiomen. It was found during the study of coastal waters; it proves that the first settlements on the territory of Losinj appeared in the prehistoric age. The statue of athlete dates back to ancient Greece. According to scientists, the island was rapidly developing at that time. You can see the priceless discovery in ... Open »
Rab Island
Art-lovers won't be bored too; they have to visit the island's capital in summer. The fact is that in summer the town streets resemble a large-scale art gallery and artists from all over the world come there looking for inspiration. The capital's archaeological area is not the only one on the island. Fans of exploring historical sites are recommended to visit the village of ... Open »
Ciovo Island
Medieval Fortress Kamerlengo is situated in the western part of Trogir. It has being retaining its chaste and spectacular view for more than five hundreds of years. The fortress is situated on top of a small hill with multiple viewing points offering an amazing panoramic view over historical area of Trogir. Church of St. John the Baptist is the true example of the Romanesque ... Open »

All about Zadar, Croatia - sightseeings, attractions, touristic spots, architecture, history, culture and cuisine. Prepare your trip together with OrangeSmile.com - find out the 'must see' things in Zadar, which places to visit, which excursions to take, where the breathtaking views are waiting for you. Planning your trip with this travel guide will help your to get the most out of Zadar in few days.