Sightseeing in Pula - what to see. Complete travel guide 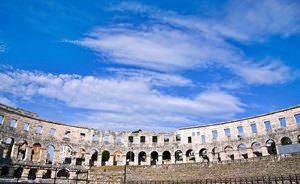 The city was founded by ancient Greeks and it has become one of the most important and largest cities of Istria thanks to its advantageous location. In Roman times Pula experienced years of rapid expansion. Many sights and places of interest have left since that time. They remind of the power and importance of this city. During its history Pula has changed its owners several times. It was ruled by the Venetian Republic for over than six hundred years. Then the city was ruled by the Austrians, and, after the First World War, Pula was known as a part of Italy. The city became the territory of Croatia only in 1991.
Extraordinary weekend in Pula - unusual places, services and attractions for travel gourmet
…

Open
This rich history couldn’t have failed to be reflected in the beautiful historical monuments. The main sight of Pula is the amphitheater called Arena. Its building took place in the 1st century. Today its walls hold theater and opera performances, and film festivals. There are also several monuments of the prehistoric times – the statue of Apollo stands here from the ancient Greeks, while the Romans gave the city a beautiful Temple of Augustus and Sergius Triumphal Arch.
Just like in any old city, archeological excavations never stop in Pula. All precious findings can be found in one of the city's museums. Here you can see a collection of pottery, jewelry and figurines. There are also several attractions for lovers of nature. In summer visitors can enjoy rest in best beaches, and the off-season is the time to explore the splendor of nature in Bruny National Park. The city is famous for its high-quality restaurants, many of which have terraces and are comfortably decorated. In addition to great food visitors will enjoy live music. Boat trips to Kornati and Brijuni archipelagoes will help to diversify leisure rest. Copyright www.orangesmile.com
Extraordinary weekend in Pula - unusual places, services and attractions for travel gourmet
…

Open
St. Nicholas church is a unique historical monument. It was founded in the 6th century. The very first building was not kept till our time, at the beginning of the 13th century the nearly destroyed church was completely rebuilt. Nowadays, the miniature church attracts tourists and pilgrims with its many religious artifacts. The medieval iconostasis, as well as beautiful icons created by the masters of the 15th-16th centuries, remained in its walls. 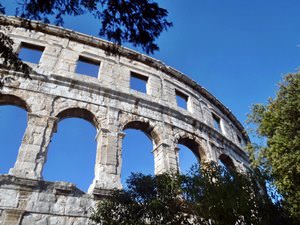 Another important cultural object - the Historical Museum of Istria is located nearby. It occupies a medieval fortress, built by the Venetians on the site of the ruined Roman Capitol. The museum offers a rich collection of ancient weapons, coins, military awards, historical maps and coats of arms, as well as other artifacts related to the history of the region. The castle is standing on a small hill. So, a chic view of the city opens from the adjacent territory.
Extraordinary weekend in Pula - unusual places, services and attractions for travel gourmet
…

Open
A popular sightseeing object is a maritime church, built in the late 19th century. It is a bright monument in romantic style. The church has very unusual external cladding, for which the builders used traditional white stone and beautiful pink marble. The interior of the church is admirable, as well. Many of its elements have remained unchanged for more than a hundred years. 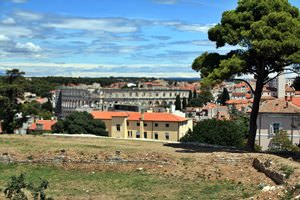 Fans of walks in historical places will be interested in visiting Punta Cristo fort, which is located on a picturesque peninsula. The total area of the fortress is 10000 sq. m. It is perfectly preserved to this day. The fortress has about 270 rooms and a complex system of dungeons, which is also available for visiting. Summer is the best time to visit this historical monument. Excellent festivals, exhibitions, and events dedicated to national culture are held there.
Extraordinary weekend in Pula - unusual places, services and attractions for travel gourmet
…

Open
The most important cultural object is the Archaeological Museum of Istria. It was founded in 1902. Now the museum possesses a valuable collection of ancient stone sculptures, ceramics and ancient metal objects that were found in the nearby archaeological areas. The museum comprises a single complex with a large library. It hosts a variety of thematic events, as well.

This guide to iconic landmarks and sights of Pula is protected by the copyright law. You can re-publish this content with mandatory attribution: direct and active hyperlink to www.orangesmile.com.

City tours, excursions and tickets in Pula and surroundings

Survived castles around Pula
♥   Castle 'Nesactium' , 10.9 km from the center. On the map

National and city parks around Pula
♥   Forest Park 'Busoler' , 2.6 km from the center. On the map

Sights around Pula from our guide 'Extreme places on Earth'

Distance from Pula center - 0.5 km.
The reconstruction has been supervised by the world-famous architect Pietro Nobile. By 1932 the amphitheater has been fully prepared for large-scale events. Currently, the theater has 5000 seats. Visitors will have an opportunity to diversify the rest with a lot of interesting events. They can stroll through the underground rooms of the amphitheater, as well as look into the archaeological museum located on its territory. During the reconstruction of the arena, scientists discovered many unique artifacts that make up the museum's exposition. … Read further 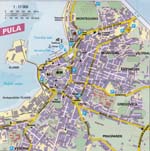 Search touristic sites on the map of Pula

Sightseeing in regions nearby Pula

Rovinj
Art-lovers simply have to make a walk down the Gerizim Street, in which modern artists display their works. Active rest fans as well as travelers with children should visit a new entertainment complex called "Monvie”. Here they will find numerous amusements, rides, a cinema and a large aquarium. Your visit to Punta Corrente Park will complete the entertainment program. This ... Open »
Istria
Resorts of Istria are the most popular and visited tourist regions in Croatia. In addition to fine hotels, there are many sanatoriums and health centers here. Gourmets will appreciate a variety of restaurants and local dishes including roasted lamb, exotic seafood and special sheep cheese, which is must-try to every connoisseur of fine dining. Every cafe and restaurant offers ... Open »
Cres
The first settlements on the island appeared in Antiquity. Many unique archaeological artifacts have been discovered on its territory. In the 16th century, Venetian Empire took over rsponsibility at the island. Extensive building of fortifications began. Some facilities survived to this day. Most of the Venetian monuments are located in the city of Cres, the capital of the ... Open »
Porec
However, beach rest remains the main entertainment for visitors. Here you will find either small lagoons or spacious beach areas, which stretch for several kilometers. Just like in any major beach resort, the coastal zone is equipped with many restaurants and discos, which make rest more pleasant and comfortable. The most popular disco is named Club Internationa; gamblers ... Open »
Losinj Island
Fans of excursions are sure to visit the ancient town of Osorio that can be called a real open-air museum without a share of doubt. The territory of the town has the incredibly amazing architectural complex. During a walk through the winding streets, guests can see the ruins of ancient buildings and the old fort, many religious buildings of different eras, and the ruins of the ... Open »
Krk
Fans of fishing will like the village of Baska that is located in the south-east of the island. At the daytime you can relax on the beautiful pebble beach; after dark, trips on boats and yachts to the island of Rab are arranged for tourists. This is the local fishing place. The cultural and historical center of the island is its capital, the city of Krk. At the center of the ... Open »

All about Pula, Croatia - sightseeings, attractions, touristic spots, architecture, history, culture and cuisine. Prepare your trip together with OrangeSmile.com - find out the 'must see' things in Pula, which places to visit, which excursions to take, where the breathtaking views are waiting for you. Planning your trip with this travel guide will help your to get the most out of Pula in few days.