Sightseeing in Porec - what to see. Complete travel guide 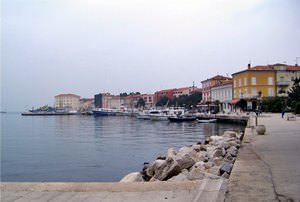 This is one of the most popular and noisy resorts of Croatia. On the streets of Porec you can always see many people; cafes and restaurants here are always full of visitors, and you will hear merry children's laughter and splashing water from the beaches of this place. Porec is ideal for outdoor activities. Here there are many places perfect for walks and conditions and equipment for exercising.
Cuisine of Porec for gourmet with top restaurants and cafe
Cozy and picturesque Porec town is ready to suggest guests the wealthy assortment of restaurants and cafes one-size-fits-all. Here are modest restaurants for afternoon resting and attractive …

Open
Along the coast lies the embankment, which features beautiful views of the surrounding islands. Here you can rent a boat or a yacht and explore most picturesque regions. Besides the observation of nature Porec is very interesting in the architectural meaning. Main streets are built in the classical Roman style. The streets’ crossing is the location of one of the most beautiful squares of Porec - Marafor. In the suburbs of the city you will find numerous religious buildings, the most famous of which is Basilica of St. Efrazius. The halls of the Basilica are decorated with wonderful Byzantine mosaics, which have become a sight of the international level.
However, beach rest remains the main entertainment for visitors. Here you will find either small lagoons or spacious beach areas, which stretch for several kilometers. Just like in any major beach resort, the coastal zone is equipped with many restaurants and discos, which make rest more pleasant and comfortable. The most popular disco is named Club Internationa; gamblers should visit the local casino located in the Roges and Parentium hotels. Copyright www.orangesmile.com
Authentic traditions, festivals and lifestyle of Porec inhabitants
Festival Dzhostra is prominent event in the city’s cultural life, visit of this festival is like real travel to past. People dressed in old aristocratic suits, brave knights and adroit …

Open
The city runs several tourist trains, so during the excursion you can see most beautiful buildings and many monuments, and the guide will tell you many interesting facts about Porec. As tourism has started developing here long time ago, tourists will be pleasantly surprised by high level of service and very low prices for accommodations. 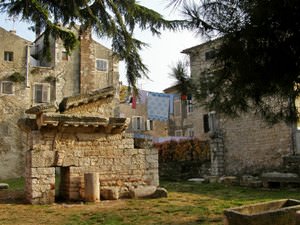 A unique ancient sight is the Great Temple, which is usually considered as a single historic ensemble with the nearby Temple of Neptune built almost 2,000 years ago. The old temples were built by stacking huge stones on top of each other. It's a wonder these buildings have been partially preserved until our days. The antique landmarks are located next to one of the city squares.
Excursion over cultural sights of Porec - 'must visit' points of interest
Porec is the most popular touristic city of the country, it draws with its hospitable atmosphere, beautiful culture and number of sights. It is better to start an acquaintance with the city …

Open
Fans of architectural attractions would be interested in visiting the House of Two Saints. Built at the turn of the 14th-15th centuries, it is located on Sveti Mauro Street. The beautiful Romanesque-style building owes its name to the fact that its facade is adorned by two skillfully executed figures. They remain one of the main mysteries of the city, as the author of this decoration is still unknown. According to some information, the sculptures were brought from abroad by the first owner of the house. 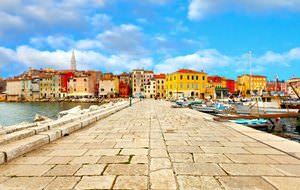 A tour of the Island of St. Nicholas with its famous tourist attractions promises to be exciting. The main symbols of the island are an old lighthouse and a defensive tower. Anyone can climb to them to enjoy the panorama of the island. The island is also famous for its natural attractions - its large part is covered by a picturesque forest. It became home to dozens of species of animals and birds; many birds were brought to the island back in the 19th century. More than a hundred years ago, only representatives of the nobility could choose the island as a holiday destination. A chic castle and several beautiful parks were founded here exclusively for them. The beautiful Tuscan-style castle has also been preserved to this day.
Your active city break in Porec. Attractions, recreation and entertainment - best places to spend your day and night here
Porec can’t stop to attract lovers of beach and ecological tourism. It is popular resort with excellent nature and well-developed infrastructure. Total extension of beaches is about 65 …

Open
Poreč Heritage Museum housed in a spectacular historic building presents visitors a rich collection of interesting historical, artistic and ethnographic exhibits. The museum is located in the current building since 1952. Today, it unites the collections of several small museums, including an archaeological museum, which existed as an independent cultural center in the early 20th century. The city museum regularly holds interesting events dedicated to various historical events, famous natives, artists, and culture. Today, several historic buildings of Poreč and its environs are managed by the museum.

This guide to iconic landmarks and sights of Porec is protected by the copyright law. You can re-publish this content with mandatory attribution: direct and active hyperlink to www.orangesmile.com.
Porec - guide chapters 1 2 3 4 5 6 7

City tours, excursions and tickets in Porec and surroundings

Survived castles around Porec
♥   Castle 'Monkodonja' , 19.1 km from the center. On the map

National and city parks around Porec
♥   Forest Park 'Zlatni rt - Škaraba' , 18 km from the center. On the map

Sights around Porec from our guide 'Extreme places on Earth'

Distance from Porec center - 44.1 km.
The reconstruction has been supervised by the world-famous architect Pietro Nobile. By 1932 the amphitheater has been fully prepared for large-scale events. Currently, the theater has 5000 seats. Visitors will have an opportunity to diversify the rest with a lot of interesting events. They can stroll through the underground rooms of the amphitheater, as well as look into the archaeological museum located on its territory. During the reconstruction of the arena, scientists discovered many unique artifacts that make up the museum's exposition. … Read further

Search touristic sites on the map of Porec

Sightseeing in regions nearby Porec

Rovinj
This is one of most romantic cities in Croatia, which is often called "the pearl of the north". Right from the first moment you will be enchanted by cozy streets, beautiful and unusual houses, and fabulous malls, as well as by hospitality and openness of the local people. The city has prepared many surprises for its guests. You will find here numerous places for walks and ... Open »
Istria
Istria is the westernmost province of Croatia, most of its territory is covered with rich pine forests. Its picturesque nature along with its mild climate has made this place irresistible in the eyes of tourists. Travelers come to admire the local beauty, enjoy the hot sun on beaches and visit the most unusual destinations of the region. Most of the attractions of Istria are ... Open »
Piran
If you prefer more serene and secluded areas for beach recreation, it is better to explore the neighborhoods of Piran. Many tourists in search of silence and solitude enjoy visiting this beach despite the concrete surface. The sea is clean and transparent in Piran, so it is easy to see underwater life. This area is suitable for scuba diving. The underwater world of the ... Open »
Portoroz
Portoroz is the most popular Slovenian resort town situated along the Adriatic coast. The chain of hills securely protects this place from cold northern winds, so the climate here is fairly mild. Many compare this resort with the French Riviera resort, because here you will also find a beautiful promenade stretching along the coast, modern hotels and white yachts. The city is ... Open »
Koper
Wine produced by Vinakoper has won international recognition for its taste and unique scent. The company exports its wine to many countries of the world. As this is the most popular alcoholic beverage in Koper, it is hard to imagine a holiday or celebration without domestic wine. Wine from Koper has won many prestigious titles and awards. All wine is made in accordance with ... Open »
Pula
The city was founded by ancient Greeks and it has become one of the most important and largest cities of Istria thanks to its advantageous location. In Roman times Pula experienced years of rapid expansion. Many sights and places of interest have left since that time. They remind of the power and importance of this city. During its history Pula has changed its owners several ... Open »

All about Porec, Croatia - sightseeings, attractions, touristic spots, architecture, history, culture and cuisine. Prepare your trip together with OrangeSmile.com - find out the 'must see' things in Porec, which places to visit, which excursions to take, where the breathtaking views are waiting for you. Planning your trip with this travel guide will help your to get the most out of Porec in few days.