Detailed hi-res maps of Makarska for download or print 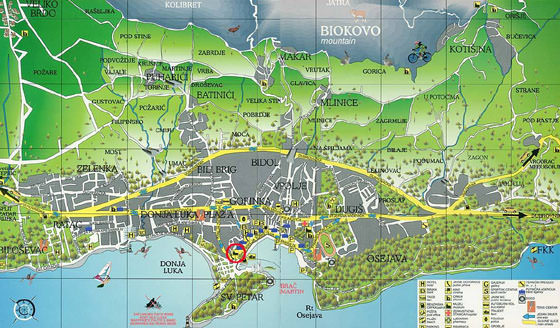 City tours, excursions and tickets in Makarska and surroundings

Search for services, infrastructure and sights on map of Makarska

Our guide chapters over Makarska

Makarska is famous for its vibrant nightlife, the resort has interesting Nightclubs, discos and bars. Rock music fans prefer to relax in the bar Rockatansky, it will delight visitors with a huge selection of treats and interesting entertainment. This bar has a large stage and regularly hosts live performances by rock musicians. The well-known cafe Art is aimed at those who are interested in various musical trends, … Open

You can also buy different types of popular ham "prosciutto" in the markets, try dozens of types of farm cheese and other dairy products. For many years, the basis of local gastronomy is fish and seafood, dishes from them are served literally in all the town’s restaurants. The most popular fish restaurants are located on the waterfront. They serve grilled fish, fresh mussels, as well as exotic black risotto … Open

Traditions and mentality of Makarska

The amazing natural beauty can be admired in the Osejava Park. It is located on a mountain slope that hangs over a small picturesque bay. In this park, convenient walkways are built for visitors. The level of bias in this area is quite large, which could not but affect the appearance of vegetation. In some parts of the park, it may seem that the trees grow under a big slope. In fact, their crowns, which naturally … Open

Makarska for children - what to visit

The best beach for family leisure in Makarska is definitely Tucepi beach. It is very long and huge, so there is enough space for everybody. In addition, you can sit in the shade on the beach or lie under the Croatian bright sun. Kids can swim here with inflatable toys and have fun. There is a playground with trampolines on the beach, which was chosen by little kids. You should definitely follow their example and … Open